Minerals Council chair on the ABC board ... climate denier Environment Minister's guest of honour ... it's their party and they'll cry if they want to ...

It’s your Minerals Council. Communications Minister Mitch Fifield finally announced two new appointments to the ABC board yesterday, as there had been two empty chairs since June last year. In a nod to “gender and geographic diversity” both the directors appointed were women, one from Western Australia and the other from Queensland. Eyebrows were raised at the appointment of Dr Vanessa Guthrie (no relation to ABC managing director Michelle Guthrie), who is also chair of the Minerals Council of Australia. That’s the same Minerals Council that sent Treasurer Scott Morrison a lump of coal to take into question time. Guthrie was featured in the Australian Financial Review last year, where she said she was concerned about social activists attacking the mining sector:

“It is severely under attack from social activism. It needs all the help it can get. But it means that the rest of the minerals industry gets somewhat tarnished by the coal debate and I think unfairly.”

“I think coal is under attack unfairly so, even though I am a very strong advocate of clean energy and renewables, but coal has a role as does uranium and nuclear power.”

As well as defending coal, Guthrie had this to say about the activists and social media:

“Sixty-one minerals are in a mobile phone. Sixty-one different elements that the world mines to produce mobile phones are in there. Without mining you wouldn’t have an iPhone. And how do you think it gets powered?”

“Most people go and get their information from Twitter or Facebook today and once it’s been tweeted it’s the truth apparently.”

“Somebody tweets that we at Toro are polluting rivers and killing babies, well there is nothing I can do about it. The fact that things get tweeted with no integrity, no facts, no research behind them frustrates me.”

The interview took place just as Donald Trump was elected president, about whom she said “it’s a wait and see” and “domestically it could be quite good for nuclear power and coal”. The ABC has been constantly criticised for not having enough conservative voices and for being biased against the coal industry. Guthrie was appointed by the government even though she wasn’t on the shortlist of recommendations from the nominations panel, but she was “identified by the Government as having the requisite skills to be a suitable appointment to the Board”.

Guthrie and her fellow new board appointee Georgina Somerset could have some interesting insights from the regions, an area where the managing director has been questioned before.

Climate denier to raise funds for Environment Minister. A tipster has shared with us the invite to the Kooyong 200 Club’s next event, featuring none other than News Corp columnist Miranda Devine as a special guest alongside Finance Minister Mathias Cormann and member for Kooyong himself, Josh Frydenberg. The club, like the Higgins 200 Club and Menzies 200 Club, exists to raise funds for the local Liberal MP. Our tipster thought it was interesting that the Environment and Energy Minister was inviting along a climate change denier as a speaker. 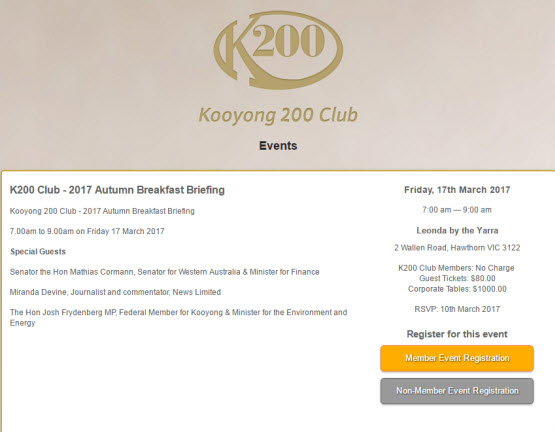 The not-a-birthday-party party. “There were no balloons!” were the cries of Liberal Senator James Paterson and Attorney-General George Brandis after Labor questioned why taxpayers had forked out $5000 for birthday parties for Coalition politicians at the Lodge shortly after the election. Ms Tips previously reported about the special event, which included “little meat pies” and “petite birthday cakes”.

According to The Daily Telegraph, the cakes were a little more than petite, and they were prepared for Julie Bishop, Josh Frydenberg and David Bushby. The official word is that the event was a welcome event for all Coalition MPs and senators after the election, and when it was realised that there were a few birthdays lining up, some cakes were ordered. Not all Coalitions members and senators were there, however. As we reported last year, Deplorables leader Tony Abbott instead opted to spend time with his mum. As a result of this line of questioning in estimates yesterday, the department has been asked to go back and figure out the cost of parties for political parties at the Lodge back to the Hawke days. Ms Tips is glad that they stopped there. Any information on events hosted by Harold Holt are likely to be considered on-water matters.

Not so much ‘on water’ as under water, submarines notwithstanding.
Minerals Council on the ABC Board, la unDivine at a Lib fund raiser, the end is nigh.