How did the Amber Harrison v Seven West case get to this point? A sub-editor's error has played a huge role.

Journalists often don’t realise the impact their stories can have, and until informed by Crikey yesterday, The Australian Financial Review’s Rear Window gossip columnist Joe Aston had no idea that he was a central player in the breakdown of relations between Seven West Media and Amber Harrison.

Seven had reached a hard-fought agreement with Harrison on the intertwined issues of her sexual relationship with CEO Tim Worner, redundancy and expenses claimed on the Seven credit card when she was executive assistant to then-Pacific Magazines CEO Nick Chan.

A second deed had been signed, progressive payments were being made and confidentiality had been observed.

But then somebody leaked sketchy elements of the affair to Aston, who produced this lead column item headlined “Chan innocent party in Seven expenses scandal” on the back page of the AFR on March 9, 2015.

The Fairfax lawyers ordered the removal all references to Harrison and the Tim Worner affair but then the following subbing blunder appeared in the last paragraph: “We attempted unsuccessfully to contact Harrison. Seven refused to comment.”

Who was this mystery person “Harrison” as the column had earlier only mentioned “a staff member” and “the employee”?

The column caused an explosion between Seven and Harrison with each blaming the other for the leak. Two years later, as evidenced by Jeff Kennett’s recent tweeting, they are still at it. 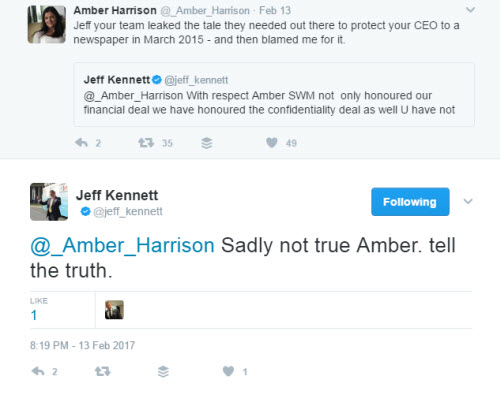 Seven’s heavy-handed response after the Aston item was to demand access to Harrison’s electronic records, and when she refused, Seven stopped making the payments. Twenty-one months later Harrison went public, and the rest is history.

Amazingly, Aston was blissfully ignorant of the fact he was such a key player until contacted by Crikey yesterday. He was not aware that his column was cited in Harrison’s affidavit material filed with the NSW Supreme Court last week, and he was curious why people kept hinting that he was some sort of central player.

However, Aston also emphatically told Crikey that neither Seven or Harrison were the source for his story. Why didn’t either of them bother to ask Aston that simple question?

OK, now that this issue has been sorted out, surely the parties can grow up and settle their outstanding proceedings before any more shareholder funds are wasted and reputational damage done. Seven has spent an estimated $2.5 million on the whole saga, and its share price is dwindling around 70c.

Meanwhile, the decision of the QBE Insurance board to disclose the relationship that its CEO John Neal had with his executive assistant is in stark contrast to the cover-up approach deployed by Seven proprietor Kerry Stokes, his obliging independent directors and Seven’s aggressive legal director Bruce McWilliam.

QBE revealed yesterday that it had cut Neal’s bonus by $550,000 because the relationship represented a conflict of interest and the CEO did not inform the board as required by company policy.

Under Australia’s transparent remuneration disclosure regime, QBE explained the bonus cut on page 71 of the annual report as follows:

“Based on the board’s assessment of the Group CEO’s performance against his balanced scorecard, an STI of $2.762 million would have been awarded. The Group CEO has had a commendable year and delivered a strong full year result for QBE. His performance is well regarded by the Board. However, both parties agree some recent personal decisions by the CEO have been inconsistent with the Board’s expectations. Therefore, the Board has decided that his 2016 STI will be reduced by 20%. Consequently, the Group CEO’s 2016 STI was adjusted to $2.21 million (or 50.2% of maximum opportunity).”

Full marks to QBE chairman Marty Becker and remuneration committee chair John Green for docking the CEO’s bonus by $550,000 and disclosing the reason in the annual report.

The CEO might be embarrassed, but the truth is out there, a message has been sent, and shareholders are in front from the decision.

Culture starts at the top and with a global insurance giant worth $17 billion this sets a standard for everyone about personal decisions, conflicts of interest and transparency. No one should be exempt from these policies, not least the CEO.

Interestingly, QBE has an 11-person board with three female directors. They will be applauded for their handling of this issue at the AGM in Sydney on May 3.

The polar opposite will happen at the Seven West Media AGM in November where there is some talk that Amber Harrison will be a candidate for the board.

Stephen Mayne – crikey founder and shareholder activist is how he defines himself and yet he starts his article on the Seven – Amber affair with this line” journalists often don’t realise the impact their stories can have” – are you kidding me. Journalists use their position and their podium to extract maximum impact and when they cannot quote legitimate sources they use the expression” informed sources” or” sources close to the situation”etc…. I am absolutely amazed of the audacity of that opening line, I am not commenting on the actual affair as I have little or no knowledge and interest but the damage that journalists have done by their articles is well chronicled and most destructive. A seasoned veteran and shareholder activist like Stephen Mayne is well aware of the impact that their stories can and do have.

Thank you SM for putting the whole sordid affair in context.
I always had a feeling that Harrison had been led like a lamb to slaughter and that this had “leaking like a sieve” thing written all over it. 7 media now needs to pull their heads in and admit their misogynistic handling of the debacle, pick up the their skirts, dust themselves off, make apologies all round and at least learn something from QBE’s handling of a similar situation. Aston needs to come clean and at least a mea culpa for being a main contributor to the whole sordid affair, (with his silence around since his article in 2015) not necessarily admitting the source of his information but an apology for his part would go a long way.