Though Fahour certainly went down boasting.

After weeks of intense criticism over his $5.6 million annual remuneration, former banker Ahmed Fahour has resigned as CEO of Australia Post. Apparently, Fahour’s decision to quit had nothing to do with the wage controversy or him having to appear before a Senate committee in a few weeks.

Fahour certainly went down boasting, with Fairfax reporting that he claimed: “We, humble old Australia Post, is now the parcels e-commerce company of Australia. And the taxpayer now has a business that is worth more than $5 billion competing commercially out there in the marketplace.”

AusPost’s profit for the December half was certainly improved on the prior year, jumping to $197 million, however, to attribute all the profit to the parcel business fails to take into account the incredible advantages AusPost’s letter’s network gives to its parcel business. Competitors like, Toll and DHL, are completely unable to match AusPost’s distribution, especially in Western Australia and rural areas (so in effect, its money-losing letters business fuels the profits of its parcel business). This structural advantage was inherited by Fahour and was the result of billions of dollars of taxpayer investment. Moreover, StarTrack, a big part of AusPost’s parcel business, was purchased, again, using taxpayer capital, for around $800 million in two tranches.

Fahour paid tribute his skills as an executive by pointing out AusPost’s returns to taxpayers, claiming that it had given back $4 billion to “to support schools, education and police”. The only problem is that number is not reflected in Australia Post’s annual reports. A Crikey investigation revealed that since Fahour became CEO of AusPost it had returned a mere $747 million to taxpayers including tax payments (which are not usually referred to in company returns). That’s only $100 million a year. At the same time, Fahour has increased basic postage costs from 55 cents to $1 for far slower service (next-day delivery as risen from 55 cents to $1.50).

But financial returns are not the entire job of a CEO; company culture is arguably equally important in building a sustainable business. In this respect, Fahour claimed, “I can put my hand on my heart and say to you, that this is a terrific organisation with a terrific set of people that work here day in and day out and it is through their efforts that we have achieved the unthinkable”.

Of course, the former BRW Young Rich Lister’s claims do not reflect the turmoil at AusPost.

Fahour then took his hand at stand-up comedy, claiming that he didn’t “really care that much about my own livelihood”. Bearing in mind Fahour lives in a $25 million Hawthorn mansion and allegedly drives a Maserati.

When he joined NAB from Citigroup, Fahour demanded a $13 million sign-on bonus.

While most Australians were appalled at Fahour’s $5.6 million salary and performance at AusPost, there was one person who backed the departing Australia Post CEO: enter former BRW founder Robert Gottliebsen. Gottie already has the dubious honour of writing what could be among the worst articles in Australian business history, when he declared back in 1990 that “in his 13 years at the helm, Spalvins has transformed the ailing tugboat company [Adsteam] into an industrial colossus”. Sadly for Gottie, within weeks Adsteam’s share price collapsed and one of Australia’s oldest businesses fell into receivership.

Gottie seems to have almost topped his Adsteam effort with his defence of Fahour. Gottie claimed that “over seven years Ahmed Fahour returned the government about $4bn in dividends and used the profits from parcels division to offset postal losses, which would otherwise have been a government cost”.

As we reported, it takes a quick look at AusPost’s annual reports to determine that the $4 billion figure quoted by Fahour is patently false. Gottie then doubled down on his mistake, claiming “the business itself is now worth at least $5bn, $4bn more than it was worth in 2010, for a total return of $8bn”. Of course, the business isn’t worth $5 billion, it never returned $4 billion and it actually reported a $352 million loss before tax in 2015.

Ahmed Fahour spent seven years running Australia Post, collecting tens of millions of dollars while more than doubling postage costs and reducing services for all Australians. This is not a legacy to be proud of.

*Adam Schwab is a former lawyer and the author of Pigs at the Trough: Lessons from Australia’s Decade of Corporate Greed 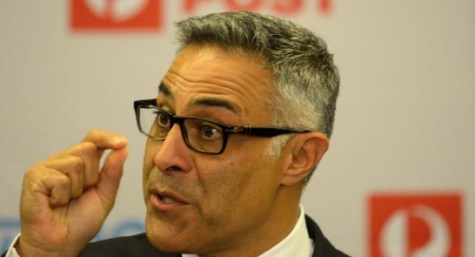 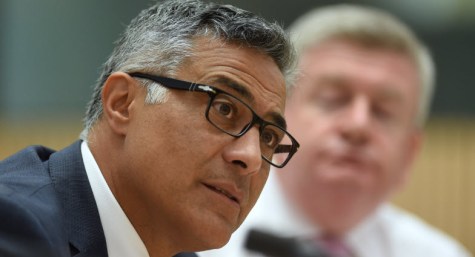 Well said Adam.
Good riddance to Fahour. He and his outrageous gouging won’t be missed.

Surely a $500,000 a year exec could take a monopoly, increase its product base, retain its core service (delivering letters promptly and at a reasonable price) and still keep it out of the red? Since when was it a good ifdea for a public service entity to make “profit”? By its very defination ( providing a public service) it should never make profit and sure as hell shouldn’t be paying an ex banker an annual renumeration totalling $5.6 million, now can we put the axe through the NBN and “private” prisons please?

You raise a point that always gets deliberately overlooked in the rationalisation of exorbitant CEO salaries: the question should not be what is the total contribution the CEO has made but, rather, what is the marginal contribution compared to someone on, say, a tenth of the salary. My guess, too, is that a $500k person would have done much the same as the gold-plated Fahour.

.. even a ‘remuneration’ of so obscene an amount.

I watched Ahmed’s speech so thanks for disabusing me of the notion that he had recently invented either parcels or the posting of parcels.

But he did well on teaching how to pick up our parcels. “sarcasm”

A return to taxpayers?? Regardless of what that actual amount is I’m confident most taxpayers would just like to get their parcels delivered, and that is not happening. Australia post’s business model is finding how many ways NOT to deliver. Go to product review and see what customers are saying.

AustPost has made a profit by a reduction in service to the public. Longer queues in the post offices and later and more infrequent letter deliveries as staff is cut to save money.