It’s been a while since a tipster has shared political junk mail with us, but it has been worth the wait. Despite the controversy over the Safe Schools program being a largely federal issue, a tipster sent us through flyers made by someone trying to make it an election issue in the upcoming Western Australia poll. Distributed by an organisation calling itself “All Kids Matter Australia”, the flyers warn of WA Labor and the Greens plans to push for a further Safe Schools roll out in WA. The flyers says Safe Schools “encourages” cross-dressing, boys and girls using each other’s bathrooms and (*gasp*) playing sport together, and while it doesn’t recommend a specific vote, it is clear in who you ought not to vote for — it mentions Labor and the Greens. 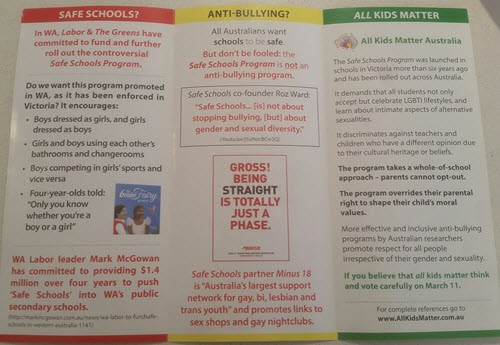 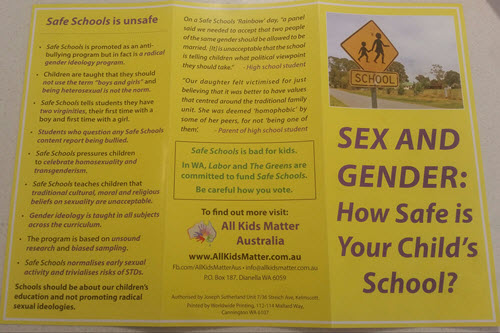 The website allkidsmatter.com.au is registered to James Craig Parker. Is this the same James Parker who addressed Christian advocacy group Family Voice Australia in 2015? The group has been vocal opponents of Safe Schools and marriage equality.

Crikey contacted the email address attached to the website registration, but didn’t hear back before deadline.

Where have all Mark McGowan’s promises gone?

The usual lies and propaganda from the usual suspects …