Is it on? The Sniping and Undermining Tour 2017 continues in Sydney tonight, with former prime minister Tony Abbott on hand to launch a collection of articles from everybody’s favourite right-wing columnists called Making Australia Right. It includes articles from Judith Sloan on the economy, Brendan O’Neill on “political correctness”, Gary Johns on inequality, Jim Molan on defence and Roger Franklin on the Liberal Party.

Abbott knows whatever he says at this event is likely to be widely reported as a criticism on the Turnbull government and a push to further destabilise a leader whose constant kowtowing is still not enough for the far right of his party.

Cheerleader-in-chief Andrew Bolt was already foreshadowing the event on his Sky News show last night, asking fellow panelist Rita Panahi if it was, indeed, on. Of late, News Corp’s most high-profile columnist can’t seem to make his mind up whether he wants Abbott to return or whether he should put his energy behind the Trumpian-tanned Peter Dutton. Abbott will also, helpfully, be appearing on Bolt’s show tonight after the book launch.

Henry, Henry, let’s all vote for Henry. It’s widely agreed that cultivating an active social media presence is an important part of any modern politician’s public profile. Family First WA candidate Henry Heng (a veteran of a collected five state and federal campaigns, and subject of what may be the greatest song in the history of political jingles) has certain tried his hand at this, with his homepage embedding a feed collecting all the tweets aimed at him. But Ms Tips has to ask how often he checks his Twitter feed, given that, last we checked, there is not a single positive tweet directed at Heng on his home page. Running second on Family First’s WA Senate ticket, Heng received 57 first preference votes in the last federal election, and apparently none of those people use Twitter. The feedback ranges from criticism of Bob Day’s business engagements, to Family First’s policies on marriage equality and climate change. Most terse of all, user ErinM provided a three-word, all-caps review of Heng’s perennial campaign theme: “LOL @ U”

Flexibility on data retention. Last week, the Attorney-General’s Department revealed it had just no way of knowing whether the data stored as part of the mandatory data retention regime was actually being stored in Australia. One concerned constituent wrote to her local Senator, Eric Abetz, about this matter, and in a generalised response — where it is clear Abetz has sought advice from the department — Abetz talked about the current legislation rather than the data retention scheme, and said that not forcing companies to keep data in Australia was about “flexibility”:

“The Bill does not specify where or how data must be stored. The amendments support a risk-based approach to managing national security concerns to the telecommunications sector, while also retaining flexibility in decision making for industry.

The continually changing nature of this environment necessitates the need for industry to innovate and be flexible to support their changing needs and with minimal but sensible regulatory burden.”

ISP iiNet, back in the day when it was a company fighting for the interests of its customers rather than for TPG’s bottom line, suggested that if there were no restriction on where the data had to be stored, it would go for the cheapest option in China. At least now if there is a data breach they will have to inform us. 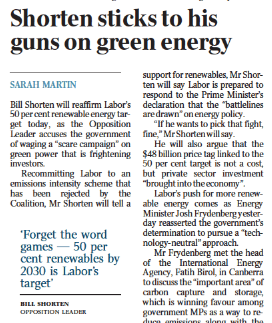 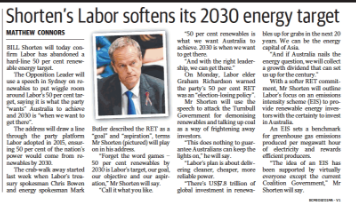 Breitbart and Milo’s sole Australian defender. Fairfax reports this morning that Defence has joined the legions of Australian companies asking their advertising agencies to prevent their ads from appearing on extreme right “news” website Breitbart in the wake of the Milo Yiannopoulos scandal, although Milo resigned from Breitbart yesterday. Defence Force recruitment ads have been hard to avoid for the past year, so it is not so surprising they would end up on Breitbart. The department told a Senate estimates committee recently it had spent close to $28 million in advertising for Defence recruitment in just the first 10 months of last year.

While Australia advertisers are abandoning Breitbart, so too have most Milo fans. Andrew Bolt — who once politely asked Milo if he could call him fabulous — on his show on Monday said Milo had “let down the cause” for free speech advocates, but couldn’t let the matter pass without suggesting left-wing hypocrisy because of the child abuse by Hollywood director Roman Polanski — Ms Tips doubts some of the people who have an issue with Milo even know who Polanski is.

Milo did find one defender Down Under, at least, in the form of Daisy Cousens on ABC’s The Drum last night, who said (after some comments against the child abuse comments) that Milo was neither alt-right nor a toxic version of conservatism.

Courier Mail is wrong in at least one statement. There is no chance that Labor would so silly as to promise half Australia’s electricity to be generated by renewables. Labor could only promise 50% of our capacity — mostly wind turbines and most of the time standing idle. Even at that more practical, but still idealistic goal, Labor risks being contradicted by the (engineers’) report on the generating spread needed to stabilise SA power. The report is due out next month.

The implied long-term commitment to gas is a denial of our obligation to eliminate all fossil emissions by 2100.

Dodger – do try to keep up, the latest government report shreds the SA blame game drivel.
This is the 21st century – nukes are sooo old hat.

Daisy Cousens is herself a “toxic version of conservatism”!
Just get her off the ABC and stop polluting the airspace…what an airhead!!

You’ve got to admire the diligence of the clown working at The Dum, trawling the various gutters from Media/Press to Politics for “contoversy as entertainment”?

Bob the builder
Reply to  CML

I’ve never heard of her, but I went down the google rabbit hole for a few minutes.

klewso
Reply to  Bob the builder

That’s the left-baiter – a contributer to “Dean’s Dummies” (The Spectator).

So many snippets here –
“close to $28 million in advertising for Defence recruitment in just the first 10 months so almost a million bucks a day for… what result?
Disappointing that the Abbotrocity’s “collection” didn’t include a bit of boilerplate from Henry Ergas on how to run a successful business.
Wonderful quote from Dunuttin’s weekly tongue bath with Rat Hately being replayed on RN – “I don’t do nuance!”. At last a true statement from the failed Qld walloper.