Less construction, but just as many worker deaths under the Coalition

How many extra deaths have there been since former prime minister Tony Abbott promised to boost construction activity in Australia by cutting regulations? The answer appears to be around six each year for the last three years.

Crikey was first alerted to this issue early in 2015 after a spike in construction fatalities following Abbott’s two powerful pre-election boasts: that he would be “an infrastructure prime minister who puts bulldozers on the ground and cranes into our skies” and that he would cut industry regulations.

On the latter, he frequently affirmed that “red tape is feeding into poor multi-factor productivity” and “a more productive economy is a less-regulated one” and “every year … two sitting days will be dedicated to the repeal of redundant legislation and review of regulations”. Current PM Malcolm Turnbull has repeated and reinforced this philosophy.

There were no qualifications, caveats or exemptions. Regulations shielding consumers or safeguarding the environment were not exempt. Nor were those protecting workers’ lives.

[Keane: the cost in dead workers of the government’s construction ‘watchdog’]

The numbers are pretty grim. As shown in the table below, total deaths for Labor’s last three years was 93, an average of 31 per year. For the Coalition’s three years, deaths increased marginally to 94, or to 31.33 per year. (We assume the last three months of 2013, after the election, was a continuation of Labor’s regime.)

But here’s the thing. Despite Abbott’s impassioned boost for the sector, continued by Turnbull, construction has contracted dramatically since the Coalition took office in 2013.

Weighted for actual activity, construction deaths increased from an average of 24.7 deaths per 100,000 chain volume units of construction activity under Labor, to 30.3 under the Coalition. That is an increase in the death rate of nearly 23%. That represents an extra six fatalities each year. 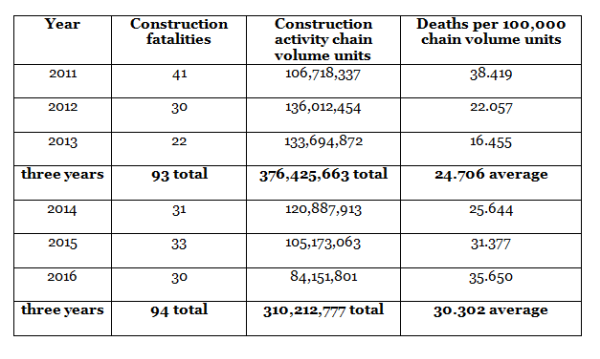 If it seems insensitive or callous or playing dirty party politics to sheet home culpability to individual members of Parliament, it may well be. But it will be remembered that this strategy was deployed to dramatic effect by Tony Abbott himself from 2010 until the 2013 election after four young men lost their lives in Labor’s home insulation program.

With the enthusiastic support of the mainstream media baying for blood, Abbott succeeded in having the nation focus on the tragic deaths in 2009 and 2010 of those young insulation workers, who became household names for a while, and blaming the Rudd and Gillard governments for their deaths.

Abbott said in February 2010 that if then-environment minister Peter Garrett had been a company director in NSW, “he would be charged with industrial manslaughter”.

Those deaths eventuated in a program that insulated 1.1 million buildings, an extraordinarily low fatality rate compared with what had been accepted without comment in previous years.

That was then. This is now.

When dead workers weren’t quite so important

Workplace safety and health systems are primarily to protect management from personal liability. The more complex are the systems the greater the protection of management and the less the systems can be used by the workforce.

What has that got to do with the article, which outlines the mendacious and callous indifference of the LNP to worker safety?

Big businesses don’t seem to be punished very much either, look to Grocon in Melbourne after a brick wall killed pedestrians, receiving a paltry fine.