Should pineapple on pizza be banned?

Will Australian MPs be brave enough to wade into the pineapple on pizza debate?

The Icelandic President has been forced to clarify his position on pineapple on pizza, after the small nation erupted over the possibility he would outlaw the controversial topping. In an appearance at a school last week, President Guoni Th. Johannesson (before you email us to say we’ve removed the proper Icelandic letters — we know, our email program mangles them) told students he was “fundamentally opposed” to pineapple on pizza and would ban it by law if he could. Of course, a social media storm ensued, because putting pineapple on pizza is a culinary atrocity (this is not the official Crikey line; Ms Tips was overruled). Johannesson has backtracked now, writing a Facebook post in both English and Icelandic, saying that while he doesn’t like the tropical fruit on a pizza, he doesn’t think it should be banned:

“I like pineapples, just not on pizza. I do not have the power to make laws which forbid people to put pineapples on their pizza. I am glad that I do not hold such power. Presidents should not have unlimited power. I would not want to hold this position if I could pass laws forbidding that which I don´t like. I would not want to live in such a country. For pizzas, I recommend seafood.” 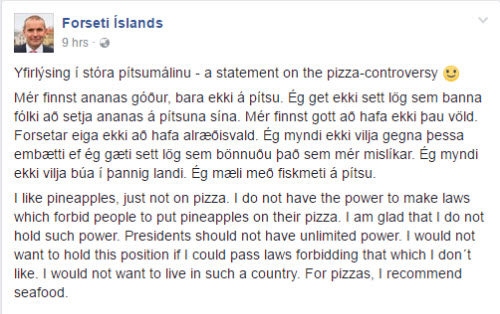 Will Australian MPs be brave enough to wade into the pineapple on pizza debate? We look forward to Malcolm Turnbull’s view on the issue.

That’s outrageous! Seafood has no business being on a pizza.

Recently one of the smartest State politicians in the country, and certainly the wittiest, was outraged at being sold a square florentine. He momentarily relaxed his libertarian ideals and demanded to know if that was illegal. It seems that it is OK for the state to nanny us if tasty pastries are under threat. We should exploit this crack in his facade and lobby him to outlaw this vile behaviour.

That … and grilled ham steaks with a ring of pineapple on top.