Milo Yiannopoulos has had a very bad week.

Sparkly bully and alt-right media tart Milo Yiannopoulos must have thought he was in for a decent week when he was booked on fellow attention liker and free speech warrior Bill Maher‘s show Real Time for as chummy a chat he’s likely to get on a mainstream current affairs program (well…) but everything rather came crashing down around him after 2016 footage emerged of Yiannopoulos appearing to condone paedophilia.

He had been booked to be the keynote speaker at the Conservative Political Action Conference in Washington DC. Chairman of the event Matt Schlapp said at the time the group was booking Yiannopoulos because he had exposed the “epidemic of speech suppression” that “has taken over college campuses”. An admirable commitment to free speech absolutism, I think we can agree. But then they cancelled his speech because of what he thinks.

Then publisher Simon & Schuster, apparently only just now realising who it had contracted, dropped his book deal. Even Andrew Bolt offered (albeit qualified) condemnation. And today, as Deadline reports, he has quit as senior news editor of alt-right “news” website Breitbart.

“It would be wrong to allow my poor choice of words to detract from my colleagues’ important reporting, so today, I am resigning from Breitbart, effective immediately. This decision is mine alone,” Yiannopoulos said in a statement.

How could it get worse? Perhaps a dictionary throwing shade. Just as Yiannopoulos resigned, Merriam-Webster tweeted the definition of a certain German word, a touch of which you may detect in this article. 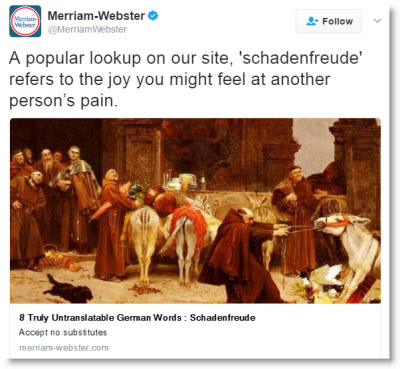 A coincidence, we’re sure.