Morrison sidesteps questions. In a corker of a piece in Rear Window this morning, the AFR‘s Joe Aston let Treasurer Scott Morrison have both barrels over the reaction to the Australian Bankers’ Association’s appointment of former Queensland premier Anna Bligh to replace Steven Munchenberg as CEO of the bank cartel peak body. His spray included that “on Friday, Scott Morrison’s office abruptly cancelled meetings with big four executives scheduled for the coming fortnight. And the message has been delivered: Morrison’s director of communications and strategy Sasha Grebe won’t meet with Bligh.”

Morrison rushed to deny that this morning in his regular Monday chat with Ray Hadley. “I had no scheduled meetings with the banks,” Morrison averred. But Aston didn’t say Morrison had had meetings, but referred to meetings between Morrison’s office and the banks, which, as you’d expect in a Treasurer’s office, are regular occurrences. And as Aston pointed out, surely the appointment of Bligh should have been great news for Morrison, who could use it to point out that even a senior Labor figure like Bligh was now rejecting the idea of the need to hold a royal commission into the banks — how embarrassing for Labor to have one of its own attacking the case for an inquiry! Instead, we had a hyper-partisan reaction of people who so viscerally hate Labor, the red mist obscures the capacity to spot political opportunities. Maybe it was the same genius who came up with the idea of threatening the NDIS if the Senate didn’t pass the government’s welfare cuts.

WA Libs love Daft Punk. Both the Liberal and Labor parties held their campaign launches in Western Australia on Sunday in preparation for the March 11 state election. The Liberals made the odd choice to get their members of parliament and candidates to dance to Daft Punk’s One More Time, and it is as awkward as it sounds. The messaging is also as questionable as last year’s fake tradie — he wanted us to stick with the current mob for a while, and the WA Liberals are asking for “one more time”. For those east coasters who don’t recognise the standout performer in the blue dress, that’s Deputy Premier Liza Harvey. She actually knows the words and can do more than clap. 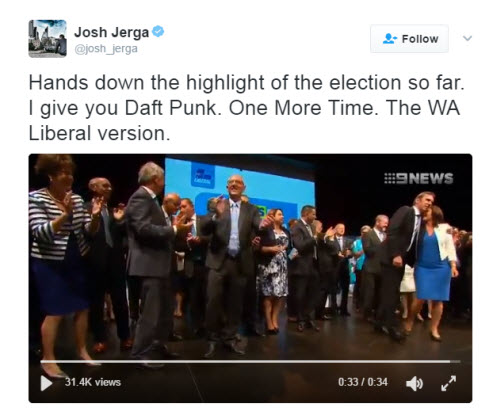 Prime Minister Malcolm Turnbull is in WA to spruik for Premier Colin Barnett, but we didn’t get to see his moves. He must have been too busy preparing for the $10,000 a head dinner held last night.

Nothing to see here. At a doorstop in Queenstown, New Zealand, this weekend, Prime Minister Malcolm Turnbull displayed hitherto undreamed of agility and innovation by actually gazing into the future. In response to a question about the growing calls for a royal commission into the banking sector, he replied:

“The calls for a royal commission, of course, again I can understand and I empathise with the reason many people want to call for a Royal Commission but the problem with a Royal Commission is that it will not actually result in any action. You would have years and years of a very expensive inquiry and then you’d have a report with some recommendations.

The recommendations would be, essentially, to do the things we’re doing now. We are setting up a one-stop-shop Ombudsman that will be able to promptly and fairly settle disputes between customers, consumer customers particularly and banks. That’s clearly what’s needed.

I have no doubt — if you had a royal commission, it would go on for years – it would make that recommendation. Let’s get on with it now. We are taking action now. We are looking after people now. That’s the big difference.”

Notwithstanding that royal commissions have, from time to time, led to some concrete action, there is no need for a royal commission into banks.  A royal commission would not recommend any action on government subsidies for the major banks, or CEO bonuses, or the role of banks in facilitating tax avoidance. Nope, it would recommend only one thing, and that thing is already happening. So we can dust off our hands folks, banking is sorted.

App mishap. Fairfax announced its new-look Domain section with much fanfare on Friday, but a tipster tells us that the launch didn’t go too smoothly when it came to the app, which failed to load the Domain section as part of Saturday’s edition. Our tipster tells us: “I was surprised that this week it wasn’t included with the rest of the paper, as in past weeks. Obviously an oversight. Today I got the alert to get the update of yesterday’s Age – now with the Domain supplement.” 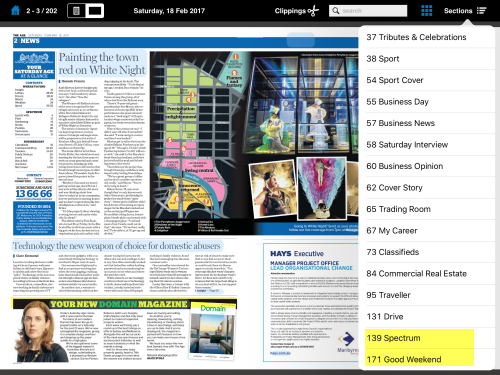 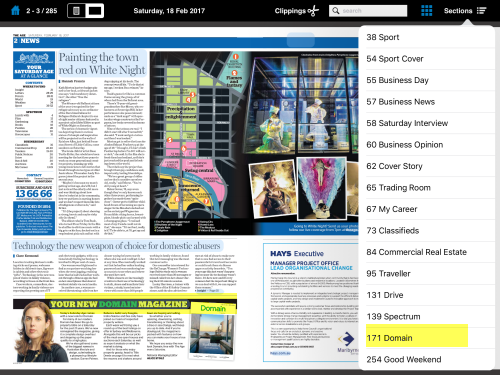 How do political performances actually serve the people?

Some one should tell Malcolm that he can have a royal commission into banks while simultaneously bringing in legislation. If he’s sure that this is what would be recommended, then go for it Malcolm. We’re not stopping you.

Talcum Trumble does Tennyson’s Locksley Hall – “For I dipt in to the future, far as human eye could see; Saw the vision of the world, and all the wonder that would be.” …”