Good morning, early birds. Coal is clean now, and Trump makes up a terrorist attack. It's the news you need to know, by Sally Whyte and Max Chalmers.

The Australian reports Frydenberg could change the mandate of the $10 billion green bank without being blocked in Parliament, and that “he and Finance Minister Mathias Cormann also have the authority to replace five of the seven members of the CEFC board within six months”.

Israeli Prime Minister Benjamin Netanyahu is due in Australia on Wednesday, but 60 prominent Australians have signed a letter opposing the visit, saying “we should not welcome him here”. The Fairfax papers report the letter was organised by the Australia Palestine Advocacy Network.

Former prime minister Kevin Rudd has told Fairfax Australia should not abandon its commitment to a two-state solution. “My deepest fear is we are drifting towards the disintegration and death of an independent Palestinian state. This would be a tragedy for both the Palestinian and Israeli people,” he told Latika Bourke.

Meanwhile, Labor Senator Sam Dastyari has “berated” Labor elders over the issue, The Australian reports. “I have always been a strong supporter of a two-state solution and of Australia playing a role to help facilitate that (but) the Labor Party can’t afford to focus on the Palestinian question at the expense of the other humanitarian challenges.”

Over in the Australian Financial Review, business leaders say they are very excited about Netanyahu’s visit.

“I am bringing the banks regularly before the house economics committee and they are being held to account for their actions and you will see results. This is one of them. This is something that was expressly raised. The bank was challenged on this and they have reflected up on that and they are responding.”

That’s Prime Minister Malcolm Turnbull, telling the media ANZ’s decision to drop interest rates on its credit card offerings was due to government policy and proves a royal commission into the banking sector isn’t necessary. Sure.

Beijing: Trade Minister Steve Ciobo is leading a delegation of business leaders to China, meeting with Commerce Minister Gao Hucheng. The Australian reports alternatives to the Trans Pacific Partnership will be on the agenda. Treasurer Scott Morrison was also scheduled to go to China this week, but the Australian Financial Review reports the meeting was postponed by the Chinese.

Adelaide: The parliamentary inquiry into “the Resilience of Electricity Infrastructure in a Warming World” (basically about power blackouts in extreme weather events) holds its second public hearing in Adelaide, with energy provider AGL and power station owner Engie to appear.

Perth: Prime Minister Malcolm Turnbull is expected to be in Western Australia campaigning with Premier Colin Barnett ahead of the March 11 state election.

Melbourne: The federal government will face a protest in Broadmeadows today, with locals and state MP Frank McGuire to protest against a detention centre for high and extreme risk offenders.

Darwin: The parliamentary inquiry into freedom of speech (specifically section 18C of the Racial Discrimination Act) will hold its final hearing today, with the North Australian Aboriginal Justice Agency and the Diversity Council Australia among the organisations represented.

President Donald Trump spent the weekend at his Mar-a-Lago resort after a public rally in Florida where he addressed a crowd of 9000 and cited a terrorist attack in Sweden that did not happen. The rally was overshadowed by a leaked draft Department of Homeland Security memo suggesting the National Guard could be used to round up undocumented immigrants. The White House said the plan was no longer on the table, and Trump tweeted that the media was “the enemy of the American people”. Trump’s Mar-a-Lago resort has become a kind of second capital, raising questions about the access to power offered to its ultra-wealthy members. Former Swedish foreign minister Carl Bildt tweeted: “Sweden? Terror attack? What has he been smoking? Questions abound.” 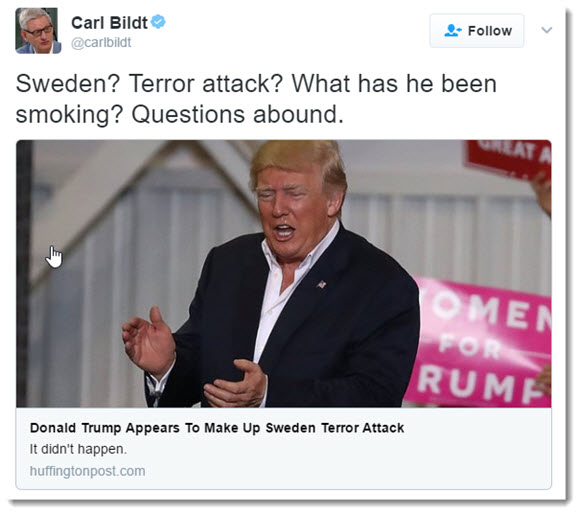 We’ve lost the knack of finding jobs for refugees — Terry Moran and Larry Kamener (The Australian $) “Australia’s poor performance in getting recent arrivals in to jobs is further evidence that the mainstream employment services are failing the very people who most need help.”

Debate over home ownership misses the point — Luci Ellis (Sydney Morning Herald): “Many renters are happy with their current home, but are required to move because the lease expired or the landlord sold the property. If we are concerned about inequality of housing outcomes, perhaps we should focus less on the type of tenure, and more on security of tenure.”

The Iraqi government has launched its final assault to recapture the city of Mosul, the last major urban centre held by Islamic State in the country. Already in control of most of the city’s east, Iraqi forces will now attempt to drive IS from the part of the city to the west of the river Tigris. Tens of thousands of people have returned to Mosul in recent months, while 750,000 civilians remain trapped in the segments still held by IS, where bitter house-to-house combat is expected in the coming weeks. — Al Jazeera

A US aircraft carrier and supporting fleet of warships have been deployed to the South China Sea as part of what the US calls “routine operations”. The deployment comes shortly after a warning from China not to challenge its sovereignty in the region. — BBC

Germany deported a record 80,000 migrants in 2016, according to Chancellor Angela Merkel‘s chief of staff. In a newspaper interview, Peter Altmaier said the number would rise again in 2017 as a result of 300,000 applications for asylum being rejected. — Reuters

Norma McCorvey, the woman who was the anonymous plaintiff in the landmark US Supreme Court case Roe v Wade, has died aged 69. McCorvey was selected by attorneys to be the plaintiff in a case challenging Texas’ ban on abortions in 1970 that eventually legalised abortion across America. McCorvey had an extremely difficult and abusive upbringing and was only peripherally involved in the case. After outing herself as the anonymised “Jane Roe” in the 1980s she became a women’s advocate. But later in life McCorvey converted to Christianity and then Catholicism, swapping sides in one of America’s most heated social debates and becoming a staunch anti-abortion activist. — New York Times

Don’t dismiss President Trump’s attacks on the media as mere stupidity (Time): “If a public figure tells a whopping lie once in his life, it’ll haunt him into his grave. If he lies morning, noon and night, it will become almost impossible to remember any one particular lie. It’s the same truth contained in Stalin’s famous remark that the death of one man is a tragedy but the death of a million is a statistic.”

Centrelink’s debt collection ‘pushed him over the edge’ (The Saturday Paper): “He was sick and incredulous. In a private notebook, he doodled a man with a gun in his mouth – behind the figure, instead of blood, was a spray of dollar signs.”

Why Amazon is the world’s most innovative company (Fast Company): “Our mobile-first, on-demand world finds its roots in Amazon’s founding idea: that digital commerce will radically reshape our marketplace. The company’s impact has already been staggering.”

Syrian history is unfolding on WhatsApp (Backchannel): “I’ve been reporting in the Middle East for more than six years. In the early days of the Egyptian revolution … activists would text me their coordinates. When WhatsApp came on the scene a few years later, it became my main tool to communicate with my landlord, my translators, and my sources. Everyone, from the then-leading members of the Muslim Brotherhood to liberal artists, was using WhatsApp.”

I’m fairly certain that if Norma McCorvey was born in 1947 she would have been 79 years old.

Disregard. It would seem that I cannot add up.