Macdonald picks his hill to die on. Liberal Senator Ian Macdonald wore out the patience of all his parliamentary colleagues late on Thursday night as he did his best to draw out debate on the axing of the Life Gold Pass for former parliamentarians. If you can even call it a debate, that is.

At some points during the evening, his colleagues stopped responding to Macdonald’s statements in an attempt to move the matter on and get the legislation passed. Macdonald said the move to axe the entitlements were “populist” and then went all Godwin, suggesting getting rid of parliamentarians was the kind of thing Hitler favoured.

“If we are to follow the populist approach, why bother with those hated, money-grabbing, self-serving politicians at all? Perhaps Hitler and Stalin or Idi Amin had the right idea: do not bother about a Parliament and you do not have to bother about those pesky parliamentarians at all.”

After being defeated on the Gold Pass, Macdonald was determined to be a pain in the arse before passing the legislation establishing the independent body overseeing parliamentarian expenses, too. Macdonald complained that while parliamentarians’ wages and other benefits were exposed by FOI (Crikey‘s frustrated attempts to obtain ministerial diaries under FOI suggests otherwise), government bodies like the Human Rights Commission and the ABC were not as transparent. The Human Rights Commission in the past has published the pay and travel expenses of its commissioners, but Macdonald was accurate to say that the pay of ABC presenters was not made public (except that one time by accident).

According to Macdonald, it is a big issue for the people he talks to: “I am not sure what part of the world the minister moves in, but, everywhere I go, people raise with me the money that is paid to presenters on the ABC,” Macondald said. “Where do you go?” Labor Senator Sam Dastyari responded. All amendments to both pieces of legislation failed to get up and, at close to 9pm, the Senate finished for the week.

Minister for security agencies defying security agency advice. This week political parties across Parliament received security briefings from the government on how to ensure their data was secure in order to avoid a DNC-style hack in Australia. It was a rather astonishing admission from the minister responsible for national security agencies that Attorney-General George Brandis uses communications applications that had not been assessed or approved for use by Australian Signals Directorate (ASD).

In a question on notice from October’s estimates hearings, Labor asked Brandis whether he used WhatsApp or any other communications application not approved by ASD. In the response published yesterday, Brandis provided a one-word response: yes. ASD said in the same response that it had done no formal assessment of WhatsApp and had no idea where WhatsApp servers were located. Will ministers get in trouble for using apps not approved for use by ASD? The Attorney-General’s Department said it couldn’t comment on the conduct of ministers.

Step to the left or a jump to the right? What will happen with Fairfax’s federal politics coverage under new national editor James Chessell? Ms Tips has heard that in a meeting with the Canberra-based staff on Thursday, Fairfax editorial director Sean Aylmer told staff, whose federal political coverage runs in The Age, The Sydney Morning Herald and the Canberra Times, coverage would move away from the “centre left” under Chessell. The new role of national editor was announced as part of Fairfax’s editorial restructure this week. Chessell’s not back from his current gig as Australian Financial Review Europe correspondent for a few months, though, and some we spoke to played down the idea of a shift to the right. We do understand that staff are feeling positive about messages from Fairfax bosses that the company is focusing on political coverage that sets the agenda, so we’ll be watching what comes out of Canberra with interest.

Never gonna give up that tenner. The Reserve Bank of Australia announced the new-look $10 bank note today, with the shiny new tenner to have a clear strip to match the $5 note. The general design has been updated, but it still includes Dame Mary Gilmore and Banjo Patterson. A few Twitter users asked where the words to Patterson’s famous poem The Man From Snowy River had gone on the new design, which is actually very subtly included in micro-print form. That didn’t stop news.com.au getting Rickrolled by a Twitter user who claimed the poem had been included on Patterson’s collar. A closer look shows the text is actually the words to Rick Astley’s Never Gonna Give You Up. For the uninitiated, “Rickrolling” is a bait-and-switch meme that involves redirecting or tricking a viewer/reader into clicking on a link to the video clip (and sometimes lyrics) of the song. 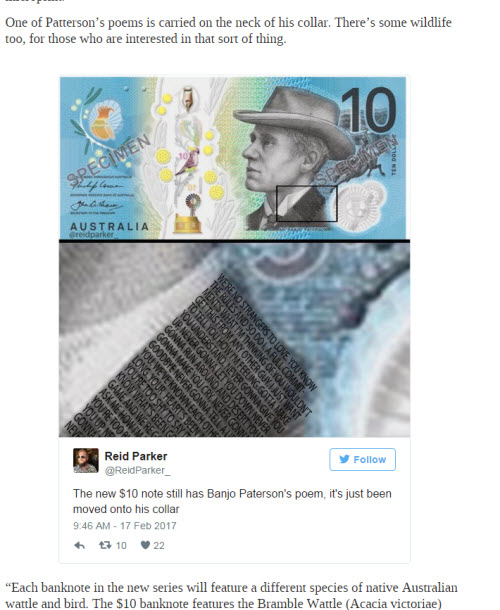 Chicken Latin. Yesterday we noted the press release of Northern Territory politician Gerry Wood, who addressed his message to foetuses he felt were not properly consulted about abortion reform in the NT. We asked if anyone could translate his Latin motto, which reads “Cessi foro gallinarum sed surgo”. Our amateur translation had a stab at “Yield to the marketplace of chickens, but rise up”. The chickens are a common motif with Wood, who we are told was a chicken farmer before becoming a politician. Our tipsters have had the following attempts at translating it:

“One chicken farmer to rule them all” — from an article in the NT News.

“I failed in the chook business but I rise up again”, one quotes from Wood himself in Northern Territory’s Hansard.

Another asks if it means something similar to “Your chooks will come home to roost”. We’ve asked Wood himself what it means but haven’t heard back. 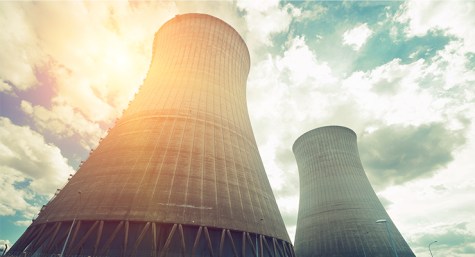 Senator McDonald spoke so sincerely on the perpetual “gold pass” being a sacred condition of employment. The maternity leave that had been a sacred condition of employment for some mothers is now described as “double dipping” and is to be wiped out. The senators over the age of 60 can get that special discount on the bus and for about a week a year can travel free on public transport.

“May your chooks become emus and kick down your dunny”?