Every time Bill Shorten gives the government an opportunity to target him, it gets distracted by its own divisions and bungles. That's why the Opposition Leader has such a charmed life.

One of the reasons that Bill Shorten has been a successful opposition leader — there are several, and some of them, like his policy bravery, are to his credit — is that he has been lucky in his opponents. Tony Abbott was a widely acknowledged disaster as prime minister. Malcolm Turnbull has turned out to be a monumental disappointment. And just as Tony Abbott was lucky to have a de facto ally in Kevin Rudd, who constantly undermined Julia Gillard, so Shorten is lucky to have, in Tony Abbott and his right-wing pals, similar allies against Malcolm Turnbull.

It means that Shorten’s own flaws and errors of judgement have never exacted a lasting political price, because the Coalition could never concentrate on them long enough without yet another disaster, debacle, gaffe or piece of precision sabotage redirecting attention back to itself.

That dynamic played itself out again this week. It hadn’t exactly been a good week for the government, what with the WA Liberals turning their backs on nearly two decades of Liberal Party policy and preferencing the delusional fascists of One Nation and elderly LNP Senator Ian Macdonald engaging in a personal crusade for handouts for retired politicians. But Shorten had stumbled over funding of the National Disability Insurance Scheme and the government had managed to keep the focus on its energy scare campaign for a couple of days running, despite it becoming ever clearer its core component of “clean coal” was not merely a lie, but a lie dismissed out of hand by the companies that fund, build and operate power plants. It even managed to draw attention to the nebulous nature of Labor’s renewable energy targets.

But business as usual was soon restored. The government, it seems, had actually been engaged in some quality policymaking internally — investigating capital gains tax changes to reduce the tax incentives for housing investors, either along the lines of Labor’s own policy or some variant thereof. It had also, in a significant shift in rhetoric, been talking about the need to find either other savings or revenue measures if its omnibus savings bill didn’t go through. The journey from Scott Morrison’s insistence that he didn’t have a revenue problem was complete.

Then Phil Coorey yesterday revealed the government’s internal work on capital gains tax. By 2.45 the idea was dead, killed off, with some reluctance, by Turnbull in question time under repeated questioning from Labor. Finance Minister Mathias Cormann had already sunk the knife in earlier in the day. Tony Abbott, vulture that he is, flapped in to feed on the corpse today, yet again repeating that the Liberals shouldn’t be raising taxes.

It’s now a pro forma caveat, but as always we should note that under the hypocrite Abbott, taxes rose from 21.4% of GDP to 21.9% of GDP, and spending rose from 24% of GDP to 25.6% of GDP — the very reason Scott Morrison admitted the government had a “spending problem” in the first place. Abbott is always lecturing his successor to do as he says, not as he did when prime minister himself.

That the government can’t even run a sensible in-house analysis of probably the most widely agreed policy prescription to deal with housing affordability and the grossly skewed incentives for housing investors without the process getting blown up is awful both from the point of view of anyone interested in good policy, and from that of the government. Turnbull has devoted the last fortnight to trying to be Tony Abbott, running a hysterical, deceitful scare campaign on energy and personally attacking Shorten. He is adhering rigidly to the demands of the Liberal right. But it elicits no good will or respite from his enemies, earns no brownie points with those who don’t trust him.

Quite what will be in the housing affordability package the government insists will be a “centrepiece” of the budget is now a mystery. The government doesn’t control land supply, it doesn’t make planning decisions, it doesn’t build local government infrastructure or public transport services. It can hand out money, or it can change the way it takes money away via the tax system. Without negative gearing or CGT changes, it’s limited in what it can do on the tax front. And every dollar it gives in handouts, no matter how worthy the cause, deepens a deficit that will be the key benchmark by which ratings agencies will assess the budget.

Meanwhile, Shorten is off the hook again. 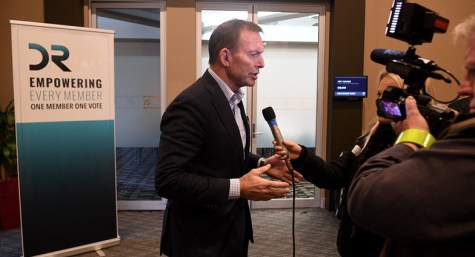 If we listen to the Government, the people who negative gear properties are teachers, nurses and the like. Just your everyday middle income families, trying to plan for their future.

So, we can’t touch negative gearing. What they fail to say is that high income earners and politicians have even larger property portfolios.. The Gratton Institute released a report early last year that said research found the two concessions, negative gearing and capital gains concessions, combined, cost the budget $11 billion a year.

Negotiations are going on to try and address this issue, however, sitting at the table is Self Interest, and he carries a lot of weight.

What the govt should consider, of course, is a comprehensive levelling of the playing field, by taxing trusts as companies, abolishing CGT discount and capping the average tax rate at 30% (the average rate that currently applies to a taxpayer with annual taxable income of about $180000). But I expect they owe too much to their special interest supporters (and financial self interest) to do so.

Any housing affordability ‘solution’ that this Government comes up with would be a pretend bullshit plan like Direct Inaction for clmate change. Pretend to do something without inconveniencing any part of their constituency or costing them a cent.

BK you forget the single important calculation to this peacock of a fellow Turnbull: he has to survive another 205 days to have served for longer than Abbott. I don’t think any policy rubbish or backflip is too far fetched for him in trying to better this goal. He judged correctly that Abbott was a failure, so he has set the measure.

Back in the pre-politics era when Trumble was merely citizen Malcolm Turnbull he enjoyed a good life &, no doubt, was the envy of many. Which begs the question, why does he continue to sell out to a barely controllable Coalition with the daily horrors of tolerating Joyce, Bernardi, Christensen et al. If he was implementing policies to improve Australia this could be his reward – alas, there is no evidence of improvement, we are sliding backwards.

Remember when life was good, Malcolm? It will be again.

I’m not even sure what ‘stumble’ Shorten had on NDIS?

Ending negative gearing and capital gains concessions is a no-brainer. As it is, the only way into the housing market for the young is to stay at home and buy a property to rent out, so at least they have a chance of competing. But in pure economic terms, there is no case for a capital gains concession at all, it should be taxed exactly as any other form of income.

Thanks Peter Costello, yet another policy shambles that has to be undone by heroic political courage, like so much of what you did. The legacy continues.