The Age, The Sydney Morning Herald and The Australian Financial Review are all running "news" about a 37-year-old panda and pets on planes, courtesy of the Chinese government. 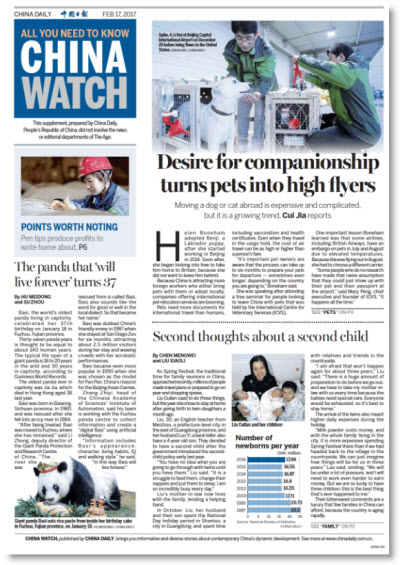 There is Donald Trump’s version of “fake news” (news stories that he disagrees with, show him in a bad light or prove he is outright lying), and then there is the national fake news story — like the propaganda inserts in Australian newspapers from the spin doctors of the Russian and Chinese governments.

This morning we had another issue of the Chinese version in the three Fairfax Media papers — The Sydney Morning Herald, the Australian Financial Review and The Age. The stories include one on a panda that has turned 37, another headlined “Desire for companionship turns pets into high flyers,” and other stories on pets. There is a front-page story headlined “Second thoughts about a second child”. Plus more soft news of dubious interest to anyone from the in-house propaganda experts of the Chinese government and Communist Party.

Not a mention of the Trump administration and the Chinese government’s view of that confusion, or the change last weekend with Trump now supporting the “one China” policy. Nor was there any mention of China’s economy, changes in policy, or what they mean for Australia. And there was no mention of the biggest mystery in China — the abduction from Hong Kong of billionaire Xiao Jianhua, one of China’s richest men, who is currently in police custody on the mainland.

Fairfax Media is obviously paid by the Chinese government to insert this soft propaganda in its papers (as the Russian government does). These days financially strapped media companies need every dollar of revenue possible. But Fairfax needs to realise fake news might be closer to home. — Glenn Dyer

In the Crikey story just above this one, “soft diplomacy” (government financed propaganda) is defended and judged perfectly OK, I think because The Australian attacked it.

Crikey doesn’t need to do The Oz’s job for it. They’ve been banging on about this innocuous and mostly totally ignored (its inserted in the middle of a racing guide in the SMH!) advertorial supplement for a while now. Leave the phoney outrage to them, Crikey…

Both the Russian & Chinese agitprop inserts are clearly marked as paid advertising – pity that the same warning isn’t given to the crap in the mudorc’s shit sheets.
Oh, wait, there is – the titles.