Good morning, early birds. Trump on the attack over Russian links, and tax increases are on the way to tackle debt. It's the news you need to know, by Sally Whyte and Max Chalmers.

TAX INCREASES ON THE WAY?

The Daily Telegraph has attacked both Senator Nick Xenophon and the whole state of South Australia in retaliation for the crossbench senator’s decision to block the government’s omnibus savings bill. Sharri Markson probably should stay away from SA for her own safety after writing:

“Even its local beer causes others pain, while its car makers Holden and Mitsubishi drained the federal coffers in repeated handouts, before ­finally exiting stage left.”

An unnamed member of the government says in the story: “Negotiating with (him) can be like wrestling smoke. You think you have a clear understanding of an agreement but it can vanish.”

In other Xenophon news, the Oz writes that his call to increase the Medicare levy to fund the NDIS would be a blow to families.

Meanwhile, Treasurer Scott Morrison has warned that taxes might need to go up in order to protect Australia’s AAA credit rating. In an exclusive interview with Fairfax, Morrison also left the door open for a negotiated result with the Senate crossbench on the government’s company tax cut plan. Morrison said: “We will exhaust every option we have to deal with the expenditure problem we have. Once that is done, the budget will then be framed.”

One of those options being explored is capital gains tax concessions for property investors — the Australian Financial Review reports the government will reveal in the budget changes to the concession, although the exact change is yet to be decided. 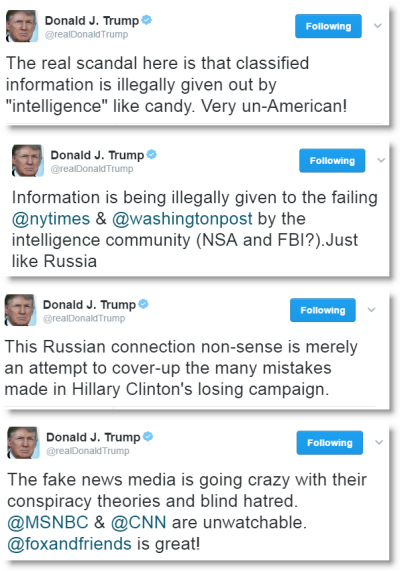 The administration of President Donald Trump is facing fresh questions about the extent of its contact with the Russian government before the 2016 election. According to a report in The New York Times, multiple Trump aides had repeated contact with senior Russian intelligence figures before the election. American law enforcement sources discovered this while uncovering evidence of Russian hacking against the Democratic National Committee. While sources told the Times there was no evidence yet of co-operation between Trump associates and Russian operatives in regards to the hacking, the resignation of national security advisor Michael Flynn has left the administration in turmoil. Republican Senate Majority Leader Mitch McConnell said it was “highly likely” a probe looking into alleged Russian interference in the US election would be broadened to include Flynn’s pre-inauguration conversation with the Russian ambassador. In response, Trump has hit out at the media and the intelligence community for “illegally” leaking to the Times and The Washington Post.

While Seven West Media posted a 91% fall in its first half-yearly profit yesterday, chairman Kerry Stokes accused former employee Amber Harrison of stealing from the company. Harrison, who says she was singled out for credit card use by the company after her affair with CEO Tim Worner, can’t defend herself due to a injunction order taken out by the company. At one point Stokes said “how dare you?” after a reporter asked about the resignation of board member Sheila McGregor, and questioned whether she had been asked not to speak on the issues surrounding Worner. As Crikey‘s Stephen Mayne wrote yesterday:

“It was the belligerence from Kerry Stokes that will kick the story along most significantly. Like with Jeff Kennett, he was aggressively defensive and dismissive of both the governance issues and the lack of accountability.”

The Senate committee looking at marriage equality has reached consensus on the terms of legislation that would allow same-sex couples to marry — though it might not matter if the government remains committed to Tony Abbott’s plebiscite and continues to refuse to allow a free vote on the issue in Parliament. The committee agreed “that ministers of religion should be free to decline to marry same-sex couples but civil celebrants should be required to uphold the law and marry gay couples if the reform were legislated”, according to The Australian. Marriage equality supporters are likely to use the report to push for a bill to be debated in Parliament. “The ‘unprecedented show of collaboration’ paves the way for a marriage equality bill as soon as next month, to be co-sponsored by Labor, the Greens, gay Liberal senator Dean Smith, the NXT and possibly Derryn Hinch,” writes The Age.

ENEMY OR VICTIM — OR NEITHER?

Appearing on Q&A should come with a warning — depending on what you say and what side of politics you come from, you could become public enemy No. 1 of the nation’s media. Just ask Yassmin Abdel-Magied, who appeared on Q&A on Monday defending slam against bizarre attacks from Senator Jacqui Lambie. The front page of The Australian reports that DFAT paid for Abdel-Magied to tour the Middle East to promote her book last year. “Taxpayers billed for Q&A activist’s grand tour of Islamic regimes” says the story, which quotes from Abdel-Magied’s blog about her excitement at being hosted by Australian embassies. Over in Fairfax it’s another story, though, with reports Abdel-Magied has faced death threats since Monday’s TV appearance.

DID HE REALLY SAY THAT?

“There is a brawler there. Not what I expected of him. He is no shrinking poppy.” That’s what Donald Trump reportedly said to a staffer about Prime Minister Malcolm Turnbull after that phone call, according to The Australian.

Australian Olympic swimmer Grant Hackett is all over the headlines after police were called to his parents’ Gold Coast home yesterday in response to an incident. Hackett was released late yesterday, but reports in the News Corp tabloids say the star’s battle with mental health issues has affected his family, with one member taking out a court order against him last month.

The ABS will release labour force figures for January.

Canberra: The final sitting day of the first fortnight of Parliament for 2017.

Sydney: Telstra, Origin, Tatts and Sydney Airport are among the companies releasing their half-yearly results today.

Brisbane: The examination of former MP and businessman Clive Palmer continues today. Yesterday Palmer couldn’t explain to the court why he had transferred $43 million of Queensland Nickel’s money to accounts belonging to himself, his father-in-law, two women and other companies he owned — all in one day.

Melbourne: The AFL JLT Community Series (formerly the NAB pre-season) starts at Etihad Stadium tonight, with Collingwood taking on an Essendon side bolstered by stars returning from suspension.

It’s a wiser Pauline Hanson that’s blown back into town — Niki Savva (The Australian $): “One Nation picks on Muslims, saying they should be banned or stopped from building their mosques. Greens have picked on Jews, supporting boycotts of their businesses, or they want the alliance with the US scrapped and a democratically elected American President banned from Australia. When it comes to the Senate, extremes are relative.”

Why have our ministers got it in for the unemployed? — Peter Martin (The Age): “Using the disabled as a human shield to defend cuts to other Australians in need is as dumb as it gets. The ministers seemed to think it would work because it was all welfare.”

Bob Hawke is wrong: recognising Palestine would just encourage intransigence — Mark Leibler (Australian Financial Review $): “Mr Hawke was well regarded as a friend of Israel, but now repeats myths often used by those who would go so far as to deny Israel’s right to exist.”

Scrap broken Australian Senate or slash its powers — Andrew Bolt (The Daily Telegraph $): “Take Xenophon. He demanded the government build 12 submarines in his home town in Adelaide rather than overseas, even though that cost perhaps $15 billion more. Yet this same man yesterday said he’d block the government’s welfare savings, telling it to cut defence spending instead.”

The US appears to have backed away from its longstanding support for a two-state solution to Israel-Palestinian conflict. At a joint press conference with Israeli Prime Minister Benjamin Netanyahu, President Donald Trump declined to commit to a one- or two-state resolution and said he preferred whichever option the Israelis and Palestinians agreed upon. Trump said he would like to see Israel “hold back for a little bit” on settlements and that the US was looking “very strongly” at moving its Israeli embassy to the disputed capital Jerusalem. In Cairo, UN head Antonio Guterres insisted a two-state solution was the only option — The Guardian / Reuters

Australian entertainer Rolf Harris will again face court over charges of indecent assault. Already in jail for a separate conviction, Harris was recently cleared of two charges of indecent assault, but the jury could not come to a decision on four other charges, three of which will now be heard again. Harris has entered a plea of not guilty. — ABC

A suicide bomb has killed 18 people in a predominately Shia district of Baghdad. The killing comes in the wake of large protests by supporters of Shia cleric Moqtada al-Sadr, demanding changes to the body that overseas elections in Iraq. No group has claimed responsibility for the bombing, but Islamic State has been responsible for similar attacks this year. — BBC

A woman has been detained in relation to the murder of Kim Jong Nam, half-brother to North Korean leader Kim Jong Un. The killing is believed to be an assassination, and Malaysian authorities ignored a request from North Korea not to perform an autopsy on the body. Earlier, media outlets published an image from CCTV footage of a woman thought to be involved in the incident. She was wearing a white shirt with “LOL” printed on it, a popular acronym for the expression “laugh out loud”. — Reuters

The Daily Mail‘s dark worldview (Spiegel Online): “Among the metropolitan elite it is loathed with a fury. Because of the division it sows, the xenophobia it peddles … the boundaries it pushes, the causes it espouses: Immigration is evil, social welfare is evil, working women are evil, Europe is evil, aid is evil, the BBC is evil …”

For multi-national families, breaking up can lead to tragedy (The Economist): “The bitterest battles, though, are about children, not money. Approaches to custody vary wildly from place to place. Getting children back if an ex-partner has taken them abroad can be impossible.”

After Flynn, will Republicans finally stand up to Trump? (New York Magazine): “When you create a White House of Lies from the Oval Office, as Trump has, and grant a license to your entire administration to lie with impunity, it soon becomes impossible for all the players to keep their stories straight whether they are talking to the press, or to federal or congressional investigators, or to each other.”