Video of the day: the interview technique of Kellyanne Conway 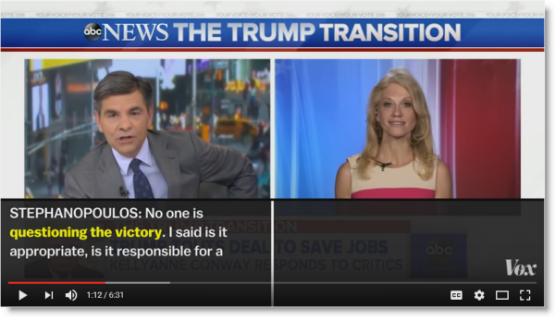 If you’re baffled by the way the Trump campaign and now administration seems to be able to weather scandal after scandal, Vox has a few answers. The American culture and politics website has put together a video looking at Donald Trump’s campaign manager/counsellor/chief defender Kellyanne Conway and her interview techniques.

First, Conway’s ability to detect an opening in the question that will allow her to take her answer somewhere else. She will mirror a keyword or phrase in the question at the start of her answer, to give the vague impression she’s addressing the question, before veering off onto whatever topic she’d rather discuss.This is so blatant that at one point, Conway actually pauses and winks as it’s happening.

Second, as happened with much of the Trump campaign, Conway exploits the understood accord between media and politician; in this case, the natural politeness of an interviewer. She knows if she obfuscates enough times, an interviewer is more likely to move on to the next topic than appear rude. (Side note: would an interview between Conway and Jeremy Paxman ever actually end?)

Third, the classic political trick of passing the buck. She has no responsibility for policy and can, in the face of tricky questions on that policy, simply say she doesn’t know.

And finally, she can fall back on the fundamental Trump tactic of simply making something up. Her key role since the start of the administration has been massaging Trump statements into more palatable versions of what they are — see her re-invention of his baseless voter fraud claims as concerns around registration.

The video is light-hearted, but maddening and faintly ominous, because Conway’s gymnastics and refusal to give any clarity on White House positions has not cost her or the administration their platform. As Maza says “just remember, she’s doing her job — it’s the news shows that keep booking her that are letting you down”. Something to bear in mind as Conway is inevitably trotted out on various news shows explaining the Michael Flynn situation, or whatever the most recent scandal is by the time this goes to print. — Charlie Lewis

Suspect that many of our pollies have been studying or channelling Kelly-Anne already. And about the only ABC journalist who I have heard on RN not giving in politely is Hamish McDonald – Fran’s a pushover.

The only solution is not to interview Conway thereby making her redundant.

Yes there are facts, and alternative facts, which Kellyanne just pulls out of her arse. Mind you quite a few Aussie politicians are good at doing this also, and are getting better at it as time goes on.