Bill Shorten appears to be edging closer to Kirribilli House with every passing day as Prime Minister Malcolm Turnbull and the Coalition melts down following the defection of rogue Cory Bernardi and with questions swirling around the Liberal Party’s approach to One Nation preferences.

All is not as it seems, however.

The Murdoch media has been desperately trying draw attention to the fact the National Left within the Australian Labor Party are moving rapidly towards ascendancy for the first time since the era of Gough Whitlam. The National Left has changed significantly since the late 1960s and early ’70s, and now represents the solid centre-left progressive views of the vast majority of Labor members and voters.

The Australian Labor Party is on the cusp of a new age of National Left dominance within the national conference and national executive, as well as an era of National Left leaders like the popular Anthony Albanese or Tanya Plibersek contesting general elections as leader of the party.

The Right now only control New South Wales branch comfortably.  In both South Australia and Victoria the Right require alliance partners to ensure stability. Every other branch is dominated by the Left.

If the New South Wales and/or Victorian state conferences were to fall to the Left that would spell complete national control for the Left, such is their importance. But the Left don’t even need to take control of those two branches in order to assert dominance in the next few years. It has already been reported that the National Left now controls the crucial National Policy Forum, which will formulate the next federal election policy platform.

I can reveal most of the names of those who will make up that powerful deliberative body. The list of names excludes two Right-aligned parliamentary delegates and three national conference elected officials whose names I was unable to attain.

The Australian Manufacturing Workers’ Union and United Voice dominate the Left majority, and together they will carry the Left. Anthony Albanese and Tanya Plibersek have significant sway within the AMWU Left and along with National AMWU president Andrew Dettmer will largely determine the Left’s positions, in conjunction with UV’s Mark Butler and national UV secretary Jo-anne Schofield.

The once untouchable Kim Carr is aligned with AMWU, however nationally the AMWU back the Albanese and Plibersek national bloc over Carr’s small breakaway Left faction. It’s almost certain he will not be a power player this time around, but the man known as Kim Il-Carr has a way of getting what he wants.

[All over the Shoppies]

Bad news for the Right.

The rank-and-file on the whole have a history of voting for Left principles, as was the case when 60% voted for Anthony Albanese as federal leader.

If we assume current branch conference floor proportions remain the same and add to that the realistic result of 66% of rank-and-file elected delegates falling for the Left. Not including the fairly even smattering of leaders and officials who are delegates, Left would hold 113 to the Right’s 122 state and territory elected delegate positions. While a result of 66% to the Left in rank-and-file delegate elections would gift them 99 delegates to the Right’s 51 delegates. All up, Left would hold 219 of 400 delegate positions or 54% of national conference floor.

This at a time when recent votes appear to indicate the New South Wales Left might be looking at an increase in their next delegation to state conference. Shorten may be the Right’s last shot out of the locker. Should he flounder Albanese will gladly inherit a party controlled lock, stock and barrel by the National Left, while the Right lick their wounds and wonder how and where it all went wrong. We could be looking at the awkward possibility of a Prime Minister Shorten, an AWU Right stalwart and former moderate union leader, implementing a Left faction-driven agenda in government. Just one of the many things that must be on his mind as he takes it up to the wounded Turnbull government and goes in for the kill. 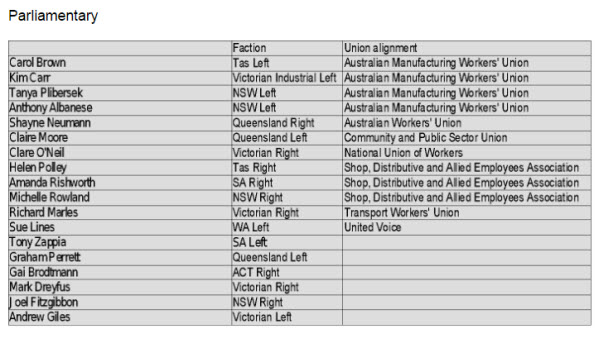 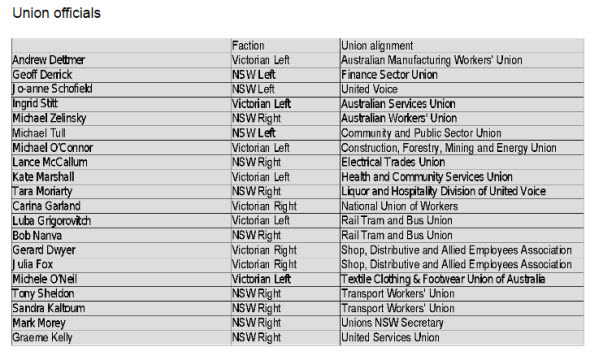 Streets, Unilever and the sticky prospect of a boycott

How the unions forced CUB to save 55 jobs: a boozy Christmas miracle

If Labor goes back to the debacle that was Rudd-Gillard-Rudd then I for one will wash my hands of them and I’m a left leaning (what ever that means) voter. If the left and right (again what does that mean?) work together with sensible and middle of the road policies they’ll be a shoe in. Leave the blustering to the LibNat/PHON/Bernardi crew. For all of Mr Hawkes and Mr Keatings faults embracing globalisation they didn’t leave the ‘little’ people behind as this government seems hell bent on doing.

I tend to agree with Barry that one of Labor’s pluses is that they haven’t changed the leader for an entire term. Pity they picked the wrong bloke the first time, although the party members didn’t.

Rudd’s landmine of changing the voting rules make it that much harder to change leader, and Shorten doesn’t seem like the type to fall on his sword, especially in such a commanding position.

But how good would Albanese be, and how much better would Plibersek be. They could wipe the floor, figuratively and literally with Plibersek and some gutsy policy.

We live and dream, but hold out no expectation.

“But how good would Albanese be, and how much better would Plibersek be” That we don’t know. Hopefully with the fullness of time we will find out without all the bullshite that went on before.

Don’t worry sheeples the churnalsts and stenographers and other vermin of the NewsCrap organisation have it all worked out they as always know which way the country is headed.

Interesting, but unless Bill falls under a bus or there is a huge swing in the polls, Shorten will remain leader up to the next election. If Labor wins he will be PM and there will be no challenge. If Labor loses the leadership positions would be open to all to pursue. So very academic assessment at this stage.

How can the opposition party change leader? Is it only after a lost election and through a vote from members?

Could members of the PHON party be called PHONies?