Not as bad as conservatives would have you believe.

Conservative politicians in Australia are also obsessed (like their US counterparts) with potential electoral fraud and are keen to introduce voter ID, but Australian Electoral Commission data recently provided to Parliament suggests it is much less of an issue than the scare campaign indicates.

While the AEC does recommend a Queensland-style voter ID requirement and an electronic database to mark voters off as they go, the stats provided by the AEC to the joint standing committee revealed that, excluding the 42 cases in Herbert, there were only 76 cases of multiple voting referred to the AFP for further investigation, following 18,000 instances of people having their name marked off the roll more than once. 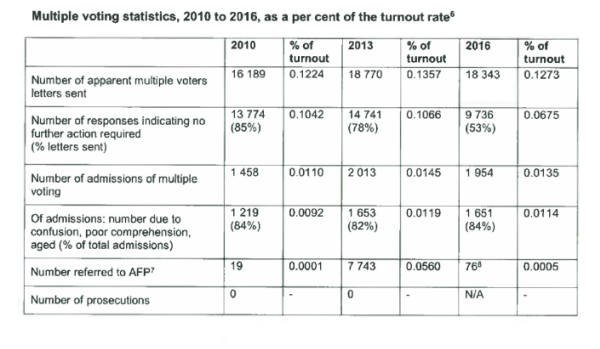 Most of these were due to people being confused or elderly. Of the 76, 65 were only marked off twice, but in two instances, people were found to have their names marked off 11 times.