Good morning, early birds. Donald Trump's national security adviser is out already, and the government tries to shore up the budget. It's the news you need to know, by Sally Whyte andMax Chalmers.

BUDGET ZOMBIES BACK TO THE GRAVE

It’s only February, but the government is already signalling what measures will be in — and out — of the May budget. The Australian reports a $13 billion hole has been blown in the budget — not due to government spending, but because Malcolm Turnbull and Scott Morrison will write off budget cuts that have been blocked in the Senate for years, called “zombie measures” by Labor. Despite the hold up (and unlikelihood of movement), the government has been counting the savings as passed when it comes to the bottom line — giving a rosier picture than the reality.

So where will the government find extra cash? The Australian Financial Review reports the government is considering higher taxes and more spending cuts to make up for the omnibus savings bill attached to the childcare reforms, which was kiboshed by Nick Xenophon yesterday. Morrison says in the report he won’t rely on strong iron ore prices to improve the budget, as that doesn’t deal with structural issues.

On the topic of that omnibus savings bill that was consigned to the dung heap yesterday, The Conversation‘s Michelle Grattan writes that Monday’s press conference linking the budget cuts to spending on the NDIS was Morrison’s brainchild, while the Prime Minister’s Office had cautioned against linking the two. Sounds like someone is trying to lay the blame on ScoMo.

CHARITY UNDER FIRE FOR EMPLOYEE TREATMENT

Charity giant Appco Group Australia faces a class action from employees over claims workers were punished for failing to meet sales targets by being forced to simulate sex acts. An ABC report says:

“The company is accused of ‘sham contracting’ — hiring workers as independent contractors rather than employees to avoid paying them the minimum wage.”

The company, which employs sales representatives seen on city streets to raise money for major charities, is facing the biggest class action of its kind in Australian history, with 730 claimants.

Sydney: Seven West CEO Tim Worner will face the press today, with the company set to release its half-yearly results. This is usually not such a notorious event, but with the scandal involving Worner’s affair with former Seven employee Amber Harrison still making headlines, today’s call between shareholders, analysts and journalists will be very interesting. Google and Twitter have both removed links and tweets to information released by Amber Harrison after Seven gained a court injunction. Harrison claims Seven treated her badly after it was revealed she had a consensual relationship with Worner while she was at the company. Could Seven chairman Kerry Stokes be on the call today, asks the Oz’s Margin Call column? He is back in the country, after all. Seven board director Jeff Kennett has penned a column defending the company board today.

Brisbane: Domino’s Pizza will release its half-yearly results today, as the company reels from a Fairfax investigation that revealed the widespread underpayment of workers at the fast food chain.

Sydney: A ceremony to mark the 75th anniversary of the fall of Singapore will be held at the Sydney Cenotaph.

Canberra: The Senate committee report on the government’s marriage equality exposure bill is due today.

The Australian Energy Market Operator will release its report into last week’s load shedding blackout in South Australia, when temperatures and electricity demand soared across the state. The Australian Financial Review reports the second unit at Engie’s Pelican Point gas-fired power station hasn’t been used since 2015, meaning it was unlikely it could have been used to prevent the blackout.

Closing the gap isn’t just a dramatic policy failure, it’s a moral failure too — Paul Daley (Guardian Australia): “… the dramatic failure of Atsic spelled the death knell of self-determination in this country. It is held up – ‘See what happens when they get to run things themselves!’ – as the exemplar of how not to manage Indigenous affairs. That’s another whitefella convenience, a way of avoiding investing trust in Indigenous people to bring better outcomes for themselves in the cities and regions and remote communities.”

No obvious pick for new prime minister — Troy Bramston (The Australian $): “Among the Coalition’s disaffected conservative voters, Abbott outranks all others on leadership. Labor strategists see Abbott as both good and bad for the Coalition. He is the “save the furniture” option just like Kevin Rudd was for Labor in 2013.”

Barnett bets the power on One Nation — Jennifer Hewett (Australian Financial Review $): “Given the polls, Joyce would also realise this deal is the Turnbull Government’s best chance of avoiding a Labor Premier Mark McGowan from next month.”

Jeff Kennett says ‘enough is enough,’ let the facts speak in Amber Harrison, Seven West Media and Tim Worner dispute — Jeff Kennett (The Australian $): “Had I been on the board of SWM when these matters were being decided, I would not have been so generous with shareholders’ funds — but I accept the decision makers acted generously, partly because of Ms Harrison’s alleged fragility.”

Coal will kill more people than World War II. Why do our ministers joke about it? — Julian Crubbs (Sydney Morning Herald): “Directly and indirectly, these policies will contribute to the loss of far more Australians than did the combined policies of the Hitler/Hirohito governments in the 1940s (27,000). They will cost many thousands more Australian lives than terrorism. Yet ministers treat them as a jest.”

Donald Trump‘s national security adviser Michael Flynn has resigned after misleading Vice President Mike Pence about his communications with the Russian ambassador. In a phone call to the ambassador prior to Trump’s swearing in, Flynn discussed US sanctions on Russia, potentially putting him in breach of an obscure law against unauthorised negotiations. Flynn then told Pence and others he had not discussed sanctions in the call, causing them to mislead the media. In a statement, Flynn said he had “inadvertently” briefed the Vice President inaccurately but confirmed he would resign after just three weeks in the job. — Washington Post

The half-brother of North Korean leader Kim Jong Un has been murdered in Malaysia. Kim Jong Nam, who had the same father but a different mother than the Korean dictator, previously said he had no desire to lead the nation and had criticised his family’s control of the state. South Korean officials said they believed the murder to have been perpetrated by North Korean agents, with unconfirmed reports indicating Kim Jong Un was poisoned by two women. — Reuters

The US has imposed sanctions on Venezuelan Vice President Tareck El Aissami, alleging he played a key role in the shipment of narcotics from the South American nation. El Aissami was appointed to his position last month but will no longer be able to visit the US and will have any assets there frozen. He denied wrongdoing and described the move as “imperialist aggression”. — BBC

Justice Department warned White House that Flynn could be vulnerable to Russian blackmail, officials say (Washington Post): “The message, delivered by Sally Q. Yates and a senior career national security official to the White House counsel, was prompted by concerns that ­Flynn, when asked about his calls and texts with the ­Russian diplomat, had told Vice ­President-elect Mike Pence and others that he had not discussed the Obama administration sanctions on Russia for its interference in the 2016 election, the officials said.”

Want to make a lie seem true? Say it again. And again. And again (Wired): “Welcome to the ‘illusory truth effect,’ a glitch in the human psyche that equates repetition with truth. Marketers and politicians are masters of manipulating this particular cognitive bias—which perhaps you have become more familiar with lately.”

Duterte targets Philippine children in bid to widen drug war (Reuters): “The Coalition Against Summary Execution, a Davao-based rights watchdog, documented 1,424 vigilante-style killings in the city between 1998 and 2015. Of those victims, 132 were 17 or younger.” 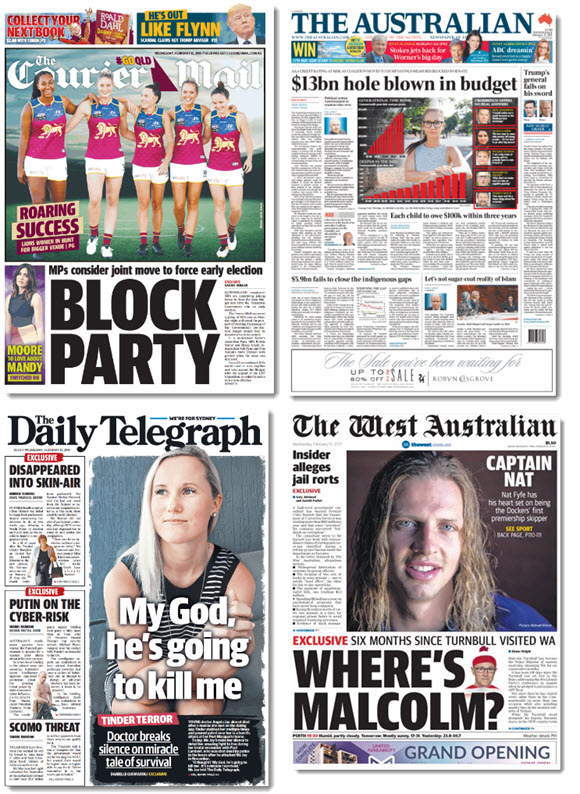