Happy Valentine's Day, early birds. The government's negotiating skills again look to be failing, and the ninth Closing the Gap address will show there's still a long way to go. It's the news you need to know, by Sally Whyte and Max Chalmers.

Senator Nick Xenophon has announced that he and the two other NXT senators won’t vote for the government’s omnibus welfare bill, blocking its chance of passing the Senate. Xenophon says the trade-off involved in the bill, which connected childcare reforms to cuts to welfare, was too harsh. “Pitting battling Australians against Australians needing disability support services is dumb policy and even dumber politics. As a negotiating tactic, this is as subtle as a sledgehammer,” he told The Advertiser.

The government also announced yesterday that $3 billion in net savings created by the bill would be used to fully fund the National Disability Insurance Scheme in its first year of full operation in 2019-20. Treasurer Scott Morrison and Social Services Minister Christian Porter said if the governments bill wasn’t passed, taxes would have to be raised or spending cut elsewhere in order to pay for the NDIS

The Australian Financial Review‘s Philip Coorey writes: “The government does not expect to pass all the cuts in the omnibus bill but is pushing the Senate for as many as it can.”

CLOSING THE GAP: WORK IN PROGRESS

The Prime Minister will deliver the Closing the Gap report today, with Malcolm Turnbull to show improvements for indigenous Australians, including health indicators and literacy and numeracy for children. Not all indicators are positive, though, with the full report to be revealed at midday when Turnbull tables it in Parliament.

Former prime ministers Tony Abbott and Kevin Rudd have both criticised the government’s approach. Rudd warned yesterday against the risk of another stolen generation, with an increase in the number of Aboriginal children placed in out-of-home care. “We do not want another generation of young Aboriginal children unnecessarily separated from their culture,” he said in a speech at the Australian National University. Abbott says it is disappointing the government is no longer spending a week in indigenous communities in the same way he did as prime minister.

Indigenous leaders will also travel to Parliament today to deliver the Redfern Statement to the PM. Co-chair of the National Congress of Australia’s First Peoples Jackie Huggins will say in a speech at a breakfast today the Redfern Statement is “an entreaty to prospective governments for us to be listened to, engaged with, and for Aboriginal and Torres Strait Islander people to be equal partners in decisions made about us”.

ONE NATION THREATENS UNITY IN COALITION

The preference deal between the WA Liberals and One Nation is causing issues in the federal coalition, with The Australian reporting “some Nationals are blaming Liberal cabinet ministers, including ­Mathias Cormann and Michaelia Cash, both WA senators, for helping to seal the agreement in Perth last weekend”.

The WA Liberal deal with One Nation preferences Pauline Hanson‘s party ahead of the Nationals in lower house seats in return for upper house preferences.

Bali: Australian woman Sara Connor will give evidence in her trial for murdering an Indonesian policeman.

Here’s a tip: don’t pick on disabled people — Laura Tingle (Australian Financial Review $): “It’s one thing for the politically tin-eared treasurer Scott Morrison to try to play funny buggers with the National Disability Insurance Scheme but for the [Morrison and Christian Porter] to try to double the stakes on the government’s omnibus childcare/family payments/welfare cuts bill by appearing to be playing off poor people against disabled people is just appalling.”

Time to recognise the state of Palestine — Bob Hawke (Australian Financial Review $): “The situation is clear — starkly clear. Like the Jews in the Soviet Union and the blacks in South Africa, the Palestinian has an aspiration to be fully free. But with a majority of the Netanyahu Government openly declared against a Palestine state they understandably see little hope in the political process.”

Closing the Gap: this coolamon carries a special baby — Jackie Huggins (The Australian $): “At its heart the Redfern Statement calls for greater recognition and representation for indigenous-led ­solutions. This includes recognition of our representative bodies and redirection of funding to our Aboriginal-controlled organisations that are already working so hard on the ground.”

Demonising Muslim women solves nothing but fuels racial division — Susie O’Brien (Herald Sun $): “Let’s focus on those who act illegally and deliberately flout court rules and stop demonising all Muslim women merely for exercising their faith. We may not like the burqa or understand why they are worn, but we must respect religious symbols and clothing as long as wearing them doesn’t conflict with Australian laws.”

A faction of the Pakistani Taliban, Jamaat-ul-Ahrar, has claimed responsibility for a blast in Lahore that killed 13 people and injured 83 more. The suicide bomb was detonated at a protest being held by chemists and pharmaceutical manufacturers. Jamaat-ul-Ahrar was also responsible for last year’s Easter Day bombing that left more than 70 people dead in a public park in Lahore. — Reuters

Former prisoner Yehiya Sinwar has been selected as the leader of Hamas in Gaza. Sinwar was a founder of Hamas’ military wing and was jailed by Israel on charges of murder and kidnapping before being released in a prisoner swap. Gaza has been under blockade by Israel and Egypt since Hamas won elections in 2006 though the faction still dominates politics and government in the strip. — BBC

British singer Adele has cleaned up at an error-ridden Grammy awards ceremony, wining five categories but accepting the “Album of the Year” gong with regret, apologising to the crowd for beating competitor Beyonce Knowles-Carter. The awards event has a history of rewarding arguably less successful white artists over black performers, though Beyonce hardly seemed bothered, delivering a show-stoping performance. — The Guardian 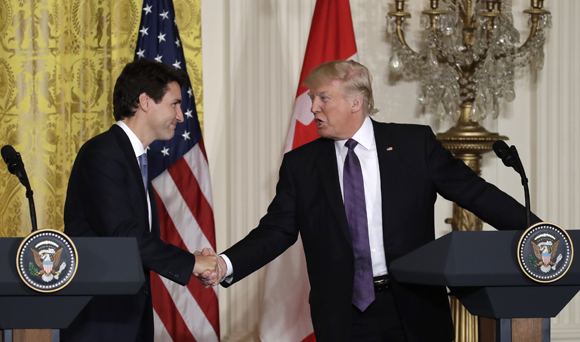 Canadian Prime Minister Justin Trudeau has had his first meeting with new US President Donald Trump. Trudeau has carefully avoided direct criticisms of Trump since he was elected last year and, despite their ideological differences, was greeted warmly by Trump today. — New York Times

When a pillar of the Fourth Estate Rests on a Trump-Murdoch axis (New York Times): “The whole time that Mr. Murdoch’s highly influential news organisations were covering Mr. Trump’s campaign and transition, their executive chairman was entangled in a financial arrangement of the most personal sort — tied to his children’s financial (very) well being — along with the president’s daughter.”

‘I thought I was smarter than almost everybody’: my double life as a KGB agent (The Guardian): “Barsky thought of his American daughter, Chelsea: could he really leave her? And, if he didn’t, how long could he evade both the KGB and US counterintelligence?”

The fascists are organising (Overland): “One might go so far as to suggest that Facebook’s structurally suited to the peculiarities of fascist organising. On the one hand, a group’s page invites all its readers to add their two cents, offering, in that way, a kind of collectivity. On the other hand, that participation’s not in any respect democratic, since the owner shapes and controls the experiences of the users.”

‘Ice Wars’ message is overblown and unhelpful (The Conversation) “We are not ‘under siege’, or ‘at war’ with ice. There is no ice epidemic. Ice is not ‘tearing apart the fabric of our community’.”