The event will put forward a vision for a new body to replace the United Nations called the Covenant of Democratic Nations.

On Sunday Senator Arthur Sinodinos said that One Nation has become lot more “sophisticated”, while this morning Tony Abbott said the party was “more nuanced” than it had been in the 1990s, when John Howard committed to not preferencing the party. We’re not sure what part of the party Sinodinos and Abbott are looking at, but we are struggling to see what is sophisticated or nuanced in Senator Malcolm Roberts’ latest invite to his parliamentary colleagues to an event where he calls for an end to the United Nations. An invitation sent out on Friday afternoon said “the United Nations has outlived its usefulness and must be replaced with a new international body, one comprised solely of those nations governed by democratic principles, devoted to genuine democracy, equality and peaceful relations throughout the world”. The name for this new body? The “Covenant of Democratic Nations”.

One of the speakers at the event is Edwin Black, who wrote IBM and the Holocaust, a book claiming the IT company’s technology allowed the Nazi regime to know the location of Jews in Germany before the Holocaust. Black is also hosting events promoting his Covenant of Democratic Nations in Melbourne and Sydney. The Melbourne event is sponsored by Likud, Zionism Victoria and the Zionist Federation of Australia. 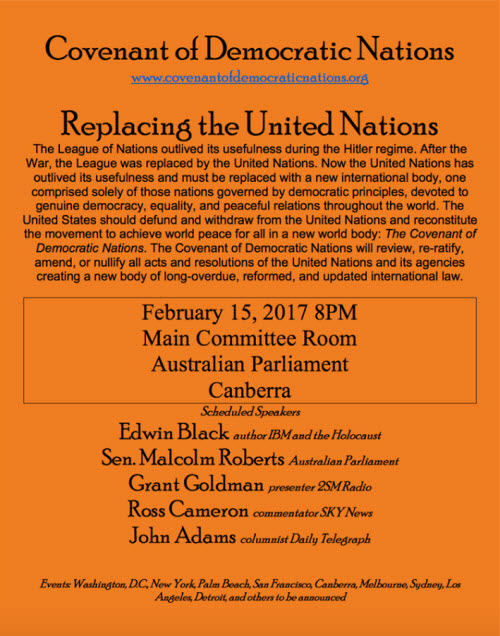 Antony Loewenstein: Supporting BDS and Palestinian rights as a Jew