Good morning, early birds. Headlines across the papers this morning are all about electricity -- expensive, renewable, extant -- we've got the lowdown. It's the news you need to know, by Sally Whyte and Max Chalmers.

Emails obtained under freedom of information show Prime Minister Malcolm Turnbull was told the day after severe storms led to a blackout in South Australia that wind was not to blame, Fairfax’s Mark Kenny reports in an exclusive today. This advice from the Australian Energy Market Operator didn’t stop the PM, Deputy Prime Minister Barnaby Joyce and Energy and Environment Minister Josh Frydenberg from using the blackout to attack renewable energy.

Speaking of politics in electricity debates, a diverse coalition of business groups, environmentalists and others have called for a bipartisan response to energy policy, in a letter stating: “The finger pointing will not solve our energy challenges. More than a decade of this has made most energy investments impossibly risky. This has pushed prices higher while hindering transformational change of our energy system. The result is enduring dysfunction in the electricity sector.”

Still on power, The Australian reports prices are up 106% over the past decade, with the figures used by Liberal state opposition leaders around the country to call for an end to state-based renewable energy targets.

Over in The Australian Financial Review, the same call by Liberal leaders in Victoria, Queensland and South Australia to drop the RETs is reported with headline “Hazelwood closure risks blackouts”. According to the AFR, last week’s South Australian blackout (not the same one as reported above) would have been worse without baseload power from Victoria’s Hazelwood power station, which is set to be closed down next month.

Also in the AFR, the Australian Energy Regulator is investigating spikes in energy prices during last week’s heatwaves across the country.

Bushfires are still burning across New South Wales, with firefighters to determine the full extent of damage to properties today. The immediate threats have been downgraded, The Sydney Morning Herald reports, but country towns across the state are not completely out of danger. The ABC reports the worst fires in Dunedoo and Kains Flat in the NSW central west have been downgraded to watch and act warnings, but the town of Uarbry is believed to have been badly hit.

Canberra: Parliament sits this week, and cabinet will meet today. Company tax cuts are on the agenda again this week, with The Australian revealing Treasurer Scott Morrison has used Reserve Bank governor Philip Lowe‘s support for an internationally competitive company tax rate to email all non-Coalition members of Parliament.

Brisbane: The inquest into the death of asylum seeker Hamid Khazaei continues after being partly heard in December last year. The coroner has already heard there was a bureaucratic aversion to moving asylum seekers to Australia for medical treatment.

Sydney: Robert Xie will be sentenced for murdering five members of the Lin family. The court was told last week he should be given five life sentences.

Bendigo: Bendigo and Adelaide Bank will release its half-yearly results.

Sydney: The Randwick races postponed on Saturday due to heat will be run today, with champion mare Winx set to run in a twilight race.

Melbourne City’s Jess Fishlock‘s (pictured) early goal in yesterday’s grand final against Perth Glory set the team in motion for a 2-0 victory, making the City the first W-League team to in back-to-back titles. 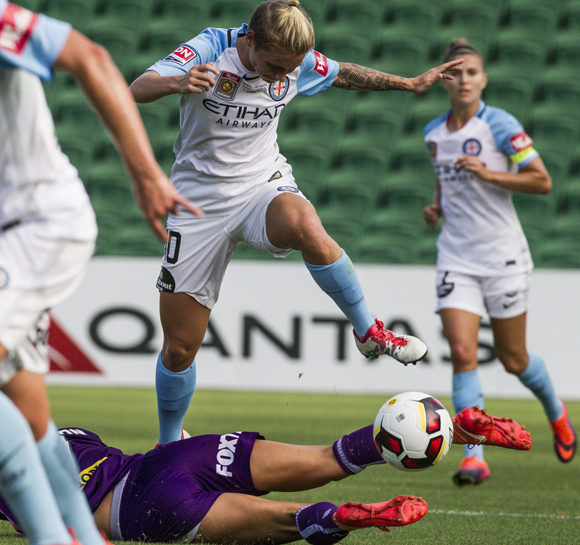 Julie Bishop shifts Australia’s stance on South China Sea — Geoff Raby (Australian Financial Review $): “Bishop‘s joint-press conference last week can be seen, whether it was intended or not, as the beginning of Australia distancing itself from US foreign policy under a Trump presidency.”

Cory Bernardi’s future doesn’t look so bright — Amanda Vanstone (Sydney Morning Herald): “His emotional intelligence is not on the high side. When people don’t recognise what he sees as his obvious talents, he discards them. He craves recognition.”

Australia is ill-prepared for its own version of Donald Trump — George Williams (Sydney Morning Herald): “Australia is the only democracy without a national bill of rights. At best, we have a few scattered rights protections.”

Baby steps towards a truly modern childcare system — Jessica Irvine (Sydney Morning Herald): “Overall it’s an improvement on the status quo, but no, it doesn’t go far enough and leaves some vulnerable kids even more vulnerable.”

7-Eleven inquiry a chance to fix whistleblower protection — Adele Ferguson (Australian Financial Review $): “… avoid at all costs a piecemeal approach or Australia will end up like the US, which is operating under 47 regulatory laws.”

Leftist mobs should not dictate who we can hear and meet — Andrew Bolt (Herald Sun $): “Stormtroopers now rule Melbourne’s streets.”

Centre-left “anti-Trump” candidate Frank-Walter Steinmeier has been elected as the President of Germany. A Social Democrat and policy wonk, Steinmeier “is only known to have lost his cool once, in 2014”, according to AFP. He was selected by Germany’s 1239 person Federal Assembly, made up of lawmakers and state representatives, and won the backing of the centre-left and Angela Merkel‘s conservatives. — Yahoo

North Korea has tested a ballistic missile, firing the weapon in the direction of Japan as the country’s leader Shinzo Abe met with US President Donald Trump. The weapon did not reach Japanese waters, but Abe described the test as “intolerable” and Trump said the US stood with Japan “100%”. North Korea claims it has the capacity to launch a nuclear strike on the US, though experts are unconvinced. — BBC

Indonesians will head to the polls this week to vote in crucial local government elections. The gubernatorial race in Jakarta has attracted the most attention, with Joko Widodo ally Basuki Tjahaja Purnama fending off rivals in a contest that has stoked religious tensions. An ethnically Chinese Christian, Purnama is on trial for blasphemy after allegedly insulting the Koran, though he still leads in the polls. The race in Jakarta is also seen as a proxy for the 2019 presidential election. — Reuters

Hundreds of whales have been returned to sea by volunteers in New Zealand, after one of the largest mass stranding events in the country’s history. More than 650 pilot whales beached at Farewell Spit over the weekend in two separate events, with about 350 unable to return to the sea. — The Guardian

Trump White House besieged by leaks (The Hill): “There have been a ton of leaks. It seems that everyone has their own leaking apparatus,’ lamented one Trump ally who works outside the White House.”

The Times takes a startup approach to its expansion down under (Columbia Journalism Review): “Instead of trying to compete with local players with blanket coverage, Cave will focus on themes and subjects where the Times has a special expertise, such as immigration, climate change, populism, and global trade.”

James Packer’s long, strange ride from Scientology to Mariah Carey (Vanity Fair): “Packer’s biggest concern now, his friend says, is what to do about the Barangaroo casino project, which would feature a nearly 900-foot skyscraper and be a striking architectural addition to Sydney Harbour. But if Crown’s high-roller numbers continue to fall in the wake of the China crackdown, he’ll be faced with the grim prospect of walking away from the project, even though Crown could likely get the financing it needs to complete it.” 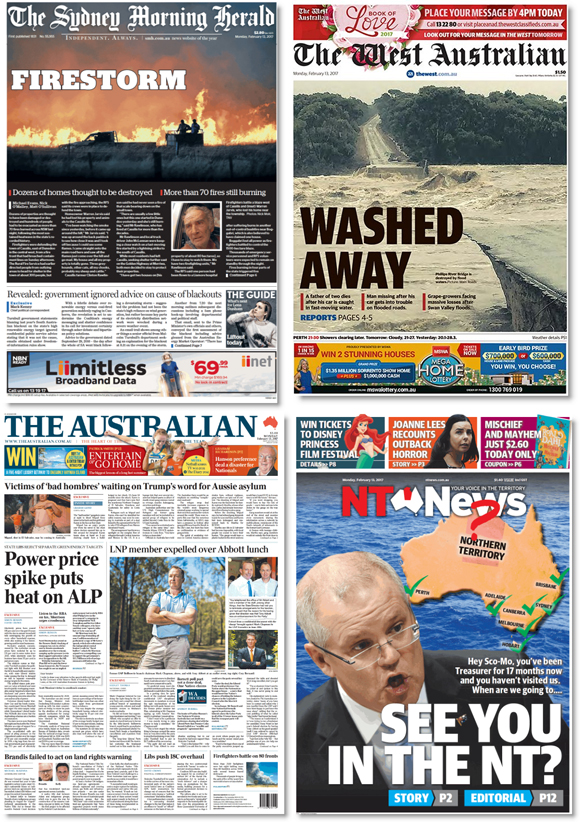