Crikey Worm: it’s going to be hot, and we love coal

Good morning, early birds. It's going to be a hot one, after a fiery week in politics. It's the news you need to know, by Sally Whyte and Max Chalmers.

It’s set to be a hot day across the country today, with temperatures pushing towards 40 degrees in Sydney, Adelaide and Canberra. New South Wales residents have been warned of the possibility of power blackouts as electricity demand rises over a three-day heatwave. There’s an increased bushfire risk in NSW, and health authorities are preparing for more people in hospitals. Meanwhile in South Australia more power sources have come online in a bid to avoid a forced blackout like the one the affected residents earlier this week.

While Australians are sweating in the sun, the government has also tried to put the heat on Labor leader Bill Shorten when it comes to energy sources, with Treasurer Scott Morrison bringing a lump of coal to question time yesterday as part of an attack on the Labor’s energy policies. “Don’t be afraid, don’t be scared: it’s coal,” Morrison said, as he accused the opposition of “coal-phobia”. The coal was then handed around the government frontbench. 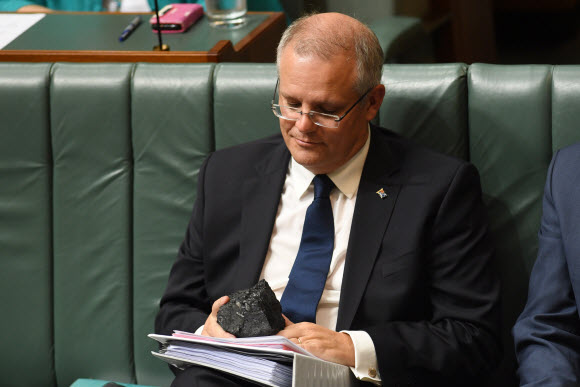 Foreign Minister Julie Bishop has attempted to call US President Donald Trump‘s bluff by telling her Chinese counterpart Wang Yi that she doesn’t believe the US actually will ditch its free trade agreement with Australia. In a Peter Hartcher exclusive, relations between the two are said to be warm:

“Mr Wang concluded his day with Ms Bishop by kissing her on both cheeks after dinner, an unprecedented gesture, much remarked upon by accompanying officials.”

Company tax cuts, free trade and investment in infrastructure are all good for the Australian economy, Reserve Bank of Australia governor Philip Lowe said last night. In a speech that The Australian says “hurts Labor” and the AFR said would “inflame Labor and the Greens”, the new governor said Australia’s corporate tax system needed to be internationally competitive, and he also warned against protectionism. “Australia is a country that has benefited greatly from the open international trading system,” he said.

Lowe also said that housing affordability and population growth was an issue for the Australian economy: “These strains can reduce public support for a growing population. They can also impair our ability to compete and to be as productive as we can be.”

He’s told Cory Bernardi he won’t be joining his new party, but that doesn’t mean that Queensland MP George Christensen has ruled out ditching the LNP altogether. The MP has refused to rule out joining One Nation — and the issue that is really burning is what the Courier Mail calls “an ongoing bitter war between cane growers and international agribusiness Wilmar Sugar Australia”. The report says Christensen has spoken to Deputy Prime Minister Barnaby Joyce saying he is in unsure of his future with the party if it doesn’t support farmers in the issue.

Canberra: New Health Minister Greg Hunt will announce the approved increases to private health insurance premiums, revealed in the News Corp tabloids as up by an average of 4.8% — the lowest in 10 years.

Nowra, NSW: Prime Minister Malcolm Turnbull will be in the country town today, appearing at a chemical company and the Nowra Show.

Sydney: The final public hearing covering the Catholic Church as part of the Royal Commission into Institutional Response to Child Sexual Abuse is today. The commission heard this week the Church used its own canon law to avoid dealing with abusers in the clergy.

Melbourne: Senator Cory Bernardi and MP George Christensen will headline a fundraising dinner for the anti-Islamic Q Society tonight. The event is to raise funds to defend a defamation case against the Q Society’s Kirralie Smith and Debbie Robinson by the Halal Certification Authority. Protests are expected outside the venue.

Melbourne: The Western Bulldogs host Adelaide at Whitten Oval in the AFLW.

Malcolm Turnbull’s attack on Bill Shorten aims to please party not public — Laura Tingle (Australian Financial Review $) :”Malcolm Turnbull‘s big challenge does not come from another leadership contender but from a morass of conflicting ideas let loose by the Trump phenomenon, which makes constructing a coherent policy platform with which to bring the fractured Coalition party base back together a nightmare.”

Turnbull can no longer fiddle while Weatherill is burning — Judith Sloan (The Australian $): “We need to move to the broader, technology-neutral clean energy target, which will mean that gas and cleaner coal generation can make a bigger contribution to supply. This will also solve the growing instability of the grid, a cost that should be sheeted home to renewable energy operators.”

The great solar power scam — Ellen Sandell (The Age): “… your power company can now pay you 5¢ for solar energy you produce, and then charge your neighbour 29¢ per kilowatt hour for using it, even though the electrons have only travelled next door.”

Like Trump, Pauline Hanson has an utter disregard for the truth — Sarah Gill (The Age): “They might call themselves “One Nation”, but they are, in reality, a ragtag bunch of screwballs who appear not to be bound by any single creed or ethos, but only by the dictum: “Anything goes.” Any ideology dressed up as a policy, any fiction paraded as the truth.”

Parliament is sitting on its hands over WADA failings — Allan Hird (Herald Sun $) “CAS could never have found the players guilty under Australian law, as WADA and ASADA know. That is why they sidestepped an appeal in Australia and went to CAS where the cards were stacked against the players.”

Russian President Vladimir Putin has offered his condolences to Turkish leader Recep Tayyip Erdogan after a Russian plane accidentally bombed Turkish troops in Syria, killing three. A statement released by the Turkish military said the raid had intended to strike Islamic State militants. While Turkey is backing anti-government rebels in the conflict, Moscow is a strong government ally. — Reuters

Wind energy has overtaken coal as the second largest source of electricity capacity in the European Union, though its intermittent nature means coal still provides more actual electricity. New figures reveal that more than 85% of new power added to grids in 2016 came from renewable sources, despite some countries moving to limit wind power. Gas remains Europe’s number one source of electricity. — The Guardian

Somalians have welcomed their new President, Mohamed Abdullahi Mohamed, as he takes over the leadership of the troubled African nation. Nicknamed Farmajo, or “cheese”, the new president will have to take on government corruption as well as a deadly insurgency waged by al-Qaeda-backed militant group al Shabaab. Somalia does not have a “one-person, one-vote” electoral system, with 14,000 delegates choosing the lawmakers who then select the president. — Yahoo

The Eiffel Tower is to be surrounded by a two-and-a-half-metre glass wall to protect visitors from potential terror attacks. The Parisian icon is currently protected by metal barriers, but officials said the new structure would prevent lorry attacks and be less of an eyesore. — BBC

The return of the Raging Turnbull (The Australian): “It’s fair to say this response did not please Turnbull. Malcolm in a fury. He shouted all sorts of obscenities, and was speaking so quickly that I could not even write them down. But before he slammed the phone down, there was one phrase that I could decipher. “My tentacles spread to New York,” he added, a reference to the fact that I was about to move to New York.”

How a single speech unleashed chaos, caused deaths and divided a nation (New Statesman): “The PM’s first masterstroke was painting the move as a strike against terrorism, much of which is financed by black money and counterfeit notes.”

Wikipedia bans Daily Mail as ‘unreliable’ source (The Guardian): “The move is highly unusual for the online encyclopaedia, which rarely puts in place a blanket ban on publications and which still allows links to sources such as Kremlin backed news organisation Russia Today, and Fox News, both of which have raised concern among editors.”

American companies are bracing for a new kind of “natural disaster”: a mean tweet from Donald Trump (Quartz): “One global strategy firm told Quartz it had issued a company-wide directive saying that Trump’s tweets should be treated the same way as an earthquake or flood.”

Where countries stand with Donald Trump: a cheat sheet (The Atlantic): “We now live in a world where European Union officials talk of the grave threat posed by the American president, who in turn doggedly defends the leader of Russia.” 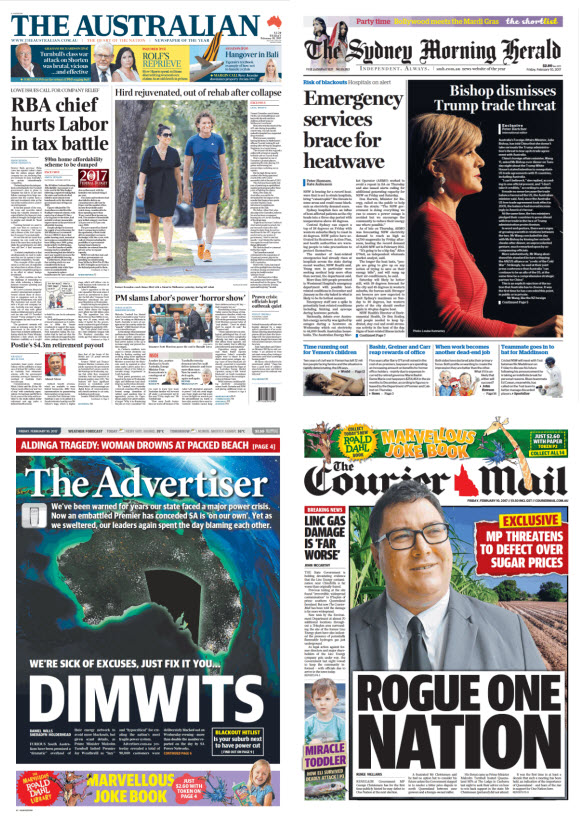