Sorry we missed you. This week, Australia Post has had a grand lesson in the Streisand Effect over its failed attempt to keep the multimillion-dollar wage of the managing director under wraps, lest it cause “brand damage” — though they might have been right about that one. No other topic this week has managed to unite the Parliament, from the Prime Minister to Pauline Hanson, to Labor and the Greens; all seem in complete agreement that Ahmed Fahour is paid way too much. The company has clearly been facing the heat from the media, too. When Crikey yesterday attempted to contact Australia Post via the usual media email address we were greeted with the following amusing response:

We were tempted to leave a card, but we can report that a second email did manage to make it through.

Imagine all the people living life in peace. Another thing that seems to have drawn together Labor and the Coalition is a keen interest in getting the Lennon Bus to come to Australia. The bus that travels around to schools to teach kids about music and the technology needed to create music. Coalition Senator Barry O’Sullivan and Labor Senator Glenn Sterle have invited MPs, staffers and journalists to come meet the brains behind the bus next week in Parliament in a push to garner support for bringing the bus down from the northern hemisphere for an Australian tour. World peace might be further off than ever before, but at least politicians can seemingly agree on something.

Dreamworld seeks new PR. Perhaps unsurprisingly, after the accident that resulted in the deaths of four people at the Dreamworld theme park in October last year and the company’s poor response to the incident in the days that followed, Dreamworld’s head of PR and internal communications role is vacant. According to the job ad, the person in question needs a focus on “pro-active activity, but supportive of reactive opportunities that come to the business”.

The new person will have their work cut out for them. Dreamworld ticket sales were reportedly down 50% in January compared to the same time in 2016.

Laming triples down. After the summer Facebook fight in which LNP MP Andrew Laming made the very poor decision to ask whether teachers were back at work or still “lesson planning” from home, Laming ended the short three-day first sitting week of Parliament (weeks after school went back, incidentally) attempting to resolve his summer fight by, surprise surprise, blaming unions. In the Federation Chamber on Thursday, Laming blamed unions for why good teachers couldn’t get ahead:

“Last month my Facebook post about teachers evoked enormous shock with the uncomfortable question being explored of precisely why teachers are doing so much work from home and why it is unpaid. As a profession, my great concern is that teaching has been under union control and this has made it harder and harder for teachers of excellence to be recognised, to advance their career and to be rewarded for it.”

Old Macdonald had a gold pass. For parliamentarians covering themselves in glory this week, look no further than LNP Senator Ian Macdonald. Macdonald — who has been in Parliament since 1990 — is one of a few remaining elected representatives who would be eligible for the Life Gold Pass were it not on the chopping block. Macdonald says he doesn’t need it for himself because he is going to leave Parliament in a box (somewhat macabre and maybe also a threat?) but says he needs to stand up for those former politicians who “aren’t paid very well” and should get a say in the debate. The base salary for parliamentarians is $195,130 per annum from July 1, 2013.

If only politicians could have a voice in Parliament? In any case, as Crikey reported earlier this week, due to previous changes, the scheme only currently covers a few dozen former MPs, and most of those barely use it. Macdonald’s attempt to set up an inquiry into the axing of the Life Gold Pass failed on the voices. Ms Tips assumes Macdonald will now go back to his usual parliamentary role of telling Labor leader in the Senate Penny Wong to shush during question time.

Laming triples down on teacher controversy 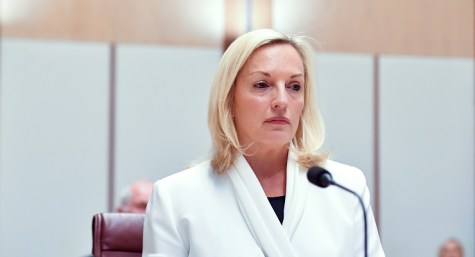 Macdonald says he doesn’t need it for himself because he is going to leave Parliament in a box (somewhat macabre and maybe also a threat?) but says he needs to stand up for those former politicians who “aren’t paid very well” and should get a say in the debate. The base salary for parliamentarians is $195,130 per annum from July 1, 2013.

I’m sure the kind of people who choose a career path with no physical danger, no minimum educational, skills or expertise requirements, no performance criteria, a performance review only once every four years,that only requires being in the office about 14 weeks a year are widely sought after and highly remunerated in private industry.

Damned uppity women – why are they away from the kitchen anyway?