Does DFAT support Israeli settlements? Australia’s ambassador to Israel, Dave Sharma, already has a poor reputation in Palestinian circles for his support for the Israeli government. And despite Australia’s supposed support for two-state solution to the Israeli occupation of Palestine (now dead in the water thanks to incessant Israeli settlement-building on occupied land, illegal under the Geneva Convention), Sharma appears happy to demonstrate where DFAT’s sympathies lie. Yesterday, Sharma tweeted about an “embassy workshop” on “on trends, challenges, scenarios on Israel’s northern border”. With whom was the workshop conducted? As confirmed by another tweet from the Austrian ambassador Martin Weiss, a group called “The Israel Project”. Who are they? The Israel Project (TIP) is a US pro-Israel body “devoted to educating the press and the public about Israel while promoting security, freedom and peace”. TIP is a strong supporter of Israeli settlements and has commissioned consultants to test the best ways to convince Americans to back them. TIP even attacked outgoing secretary of state John Kerry for his anodyne statement in support of a two-state solution.

So why is “Ambassador Dave” working with a group that actively promotes the key threat to the two-state solution Australia supposedly supports? How much money did TIP receive from DFAT for this “workshop”? The normally eager tweeter Dave didn’t respond to our repeated requests for an answer on social media.

Ladies’ night. The federal Young Liberal Movement has released its strategy to engage more women, and it makes for interesting reading. The strategy, developed by former president of the organisation Claire Chandler, involves forming a women’s engagement committee to “drive cultural change and champion gender diversity within the Movement” and Young Liberal Women’s Network and mentoring program to connect women. Interestingly the engagement committee will always be co-chaired — by the president of the organisation, and one other. The strategy reads “The Committee will be co-chaired by the Federal President of the Movement and another member of the Committee with the intention that one of the co-chairs will be male and the other will be female”, which means that the committee to engage women will always have a man in leadership.

No girls allowed. Sydney University is making headlines today over a scholarship for a veterinary student who is from a rural area and commits to working in the regions in the future — and is a man. Women in the course feel the scholarship specifications are unfair — although there are more women studying veterinary sciences than men, they still face a gender pay gap once they are in the industry, one student told The Sydney Morning Herald. The scholarship is new this year, which is partly why the gender specification has caught so much attention. Emeritus Professor Marshall Edwards, for whom the scholarship is named, died in 2012.

It isn’t the only scholarship to have unusual or out-of-date criteria — the Frederick Richard O’Connell Scholarship, which is offered to students at Victoria University and the University of Melbourne, specifies that recipients must declare that they are not and never have been a member of the Communist Party of Australia, and are not a communist sympathiser or the child of a CPA member or sympathiser. Even if a stipulation doesn’t feel quite so relevant any more, if it’s written into a will, it has to stay.

Election submissions. Senator Chris Back has made a submission to the Joint Standing Committee on Electoral Matters review of last year’s election, questioning whether it is a good idea for people to hand out how-to-vote cards after he was abused by a constituent on election day:

“I am sure the only reason I was not physically assaulted by one irate voter was because of the protection afforded to me by people supporting all parties who were attending the booth. His anger seemed to be directed at the fact he was forced to vote, not necessarily the Party I was representing.”

“We were all the subject of verbal abuse at various times throughout the day.”

“I question the extent to which a voter is influenced by the presence of people simply standing there handing out ‘how to vote’ cards when determining their decision.”

Perhaps Liberal volunteers will opt out of manning polling booths next time round if it’s thought they don’t make a difference? 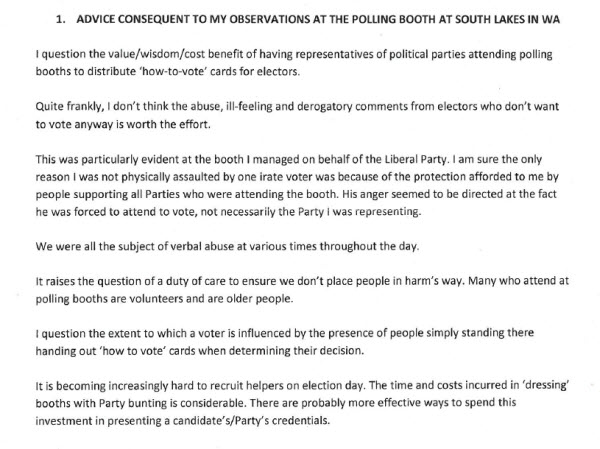