Hinch’s Senate diary: back to school and bully boy Bernardi gets a spanking

Why did the Hinch Justice Party Senator change his mind on the ABCC bill?

On the lush lakeside lawn at Yarralumla (my first ever visit there, surprisingly) for the Governor-General’s Back to School soiree on Sunday night, the PM asked after my wellbeing.

Speaking of the man, who is trying to be the biggest party-wrecker with that name since Corey Worthington, he was the reason I was cautioned by acting deputy Senate president Peter Whish-Wilson for unseemly language.

We’d only been back for about 35 minutes on our first sitting day for 2017.

And then I made the mistake of quoting one of LBJ’s famous crudities:

Contrary to most commentators and their Another Turnbull Disaster skew, I said:

“Maybe Malcolm Turnbull is well rid of Senator Bernardi, because at least he is now out there pissing all over everybody else, and inside his own party room he has one less …”

The Protocol Police Whish-Wilson cut in with: “Senator Hinch, I draw your attention to the standing orders. You are sailing fairly close to the wind in the use of your language.”

Senator HINCH: I will take it back, but I will leave the quote from President Johnson, because he is a President and he said it.

I resisted the schoolboy joke about the best way to get your own back.

And back to the Sunday night Welcome Back party thrown for senators and House of Reps pollies by Governor-General Sir Peter Cosgrove. I had a delightful and informative 10 minutes alone with him before he excused himself by saying, “Sorry, I’m being eye-balled”.

He told me how Yarralumla was meant to be a temporary home for the GG but, when the Depression hit, all thoughts of moving or re-building went out the window.

I did learn a juicy vice-regal snippet that reminded me of Charlie Bell, who started out as a 19-year-old gofer at McDonald’s in Australia and ended up as their worldwide CEO.

The GG told me he used to be an ADC at Government House back in 1972. And now the much-decorated soldier lives there as Chief Honcho.

(PS: The GG looked very sartorial. After my earlier column, he has obviously sacked Khrushchev’s tailor.)

OK. AB bloody CC. “Hinch the flip-flopper”,  “Hinch the weathervane”.  I hope what I did during and after the long summer break actually showed some common sense.

In the final days of Parliament last year, Nick X and I teamed up to push the government on some vital sub-contractor amendments  in the Building Code and ABCC, which passed and which I thought would make us the tradies’ friends (whistleblower protection and invoice protection when a builder was going broke).

Not so. Over the break, I talked to subbies and mid-level and small developers. Their mood — especially over the negotiated two-year delayed starting date – can be summed up by the bloke in overalls in my local post office:

“What the [bleep] are you doing to us? I’ll be broke in two years?”

Emailers complained that even nine months was too long.

I figured if I had voted to pass a law that actually would hurt the people we were supposedly trying to help, then I was wrong.

I called the PM and told him I’d accept the nine months.

That prompted a piece of graffiti I saw on the wall of a Hollywood nightclub toilet:

“Janet lay is the best lee in town.” 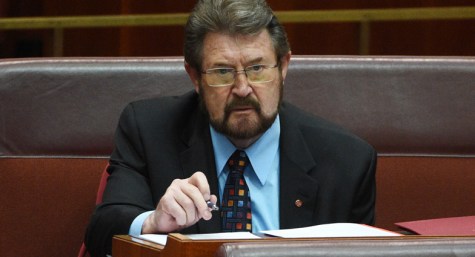 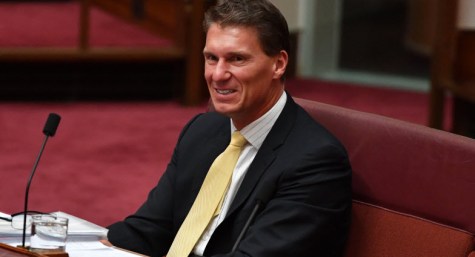 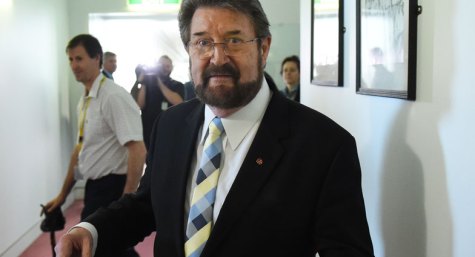 Hinch’s Senate Diary: how I was shirt-fronted for defying the govt’s backpacker tax

If ‘pissing’ is unparliamentary speech, perhaps you should have used ‘pisseth’ as being perfectly acceptable to the religious fanatics in the Coalition since it’s in the King James’ Version in 1 Samuel 25:22 ‘So and more also do God unto the enemies of David, if I leave of all that pertain to him by the morning light any that pisseth against the wall’.

Is Hinch actually doing any research on what he votes for? It’s just with all the flip flop votes it’s starting to sound like he votes for whatever the last person he spoke to said.

On the contrary, I’d rather a pollie who, even after the fact, reflects, engages, consults and then takes a different approach; to one who makes the wrong decision, realises it and then pig-headedly sticks to their guns.

Why didn’t he talk to these people before voting on the bill the first time? If he’d done his reasearch the first time around he wouldn’t have to hope for post office encounters to find out what the people affected want.
Given this story and he’s flipping about on the backpacker tax it’s starting to feel that he’s just winging it.

Derryn…I think you should be talking to the various Law Societies and similar groups around the country before doing these backflips.
Just about every such organisation agrees that the ABCC, and related legislation, is bad law. And in the case of the ABCC is discriminatory and JUSTICE denying to the group it seeks to control.
Perhaps you need another slogan for your own ‘party’?????

Or he could just read Bernard Keane in Crikey. If he’d done that just before he walked in the chamber he’d probably have voted a different way.