Vaticanologist Michael Hewitt-Gleeson wonders what Jesus would have to say to his flock were he around to see the royal commission into child sexual abuse.

The Royal Commission into Institutional Responses to Child Sexual Abuse has revealed about the Catholic Church in Australia that:

Now consider, what if Jesus were asked to comment on this tragedy today?

***
PRESS: Your Sacred Heart must be broken today to hear this report about child abuse. We are curious to know your view. Can you tell us what you feel about the abuse of children?

JESUS: This is a subject on which I really have had a lot to say. You will not have to stretch a point to understand my views about the value of children. I have given very clear instructions to my followers. The accused and their protectors have squandered my reputation and that of the Church by their procrastinations, dissembling and shortcomings on this real issue, which is so close to my heart.

JESUS: Well, aren’t we all? Sadly, my bishops have chosen to ignore the authority I have expressly given them about children and their abusers.

PRESS: What have you ever said about this issue?

JESUS: One day, I was teaching my apostles. These were the first bishops – my own bishops, whom I personally appointed. They were curious about rank and precedence in heaven. Naturally, they wanted to know who I thought would secure the most favourable positions in heaven. They kept asking me about who’d get to be in the inner sanctum? Who would sit closest to the Father Himself? I saw this as a good opportunity to assert my authority. I spoke to my bishops ex cathedra, giving them one of my core teachings. Later these teachings were recounted first by Matthew and then corroborated by Mark and Luke. I saw a little kid watching me so I called him over and sat the kid in the middle of them all and then I taught them the following important lesson. May I quote?

JESUS: Well, here I became most passionate. I said to them:

“But if anyone is the downfall of one of these little kids who believes in me, it were better for him that he drowned in the deep of the sea with a great millstone tied round his neck.” (Matt 18:6)

PRESS: Did you really say that?

JESUS: Yes, I am on the record in Matthew, Mark and Luke in the New Jerusalem Bible, which is the official Vatican version of the Bible.

PRESS: Child abuse can be emotional, physical or sexual and there have always been abusers of children. What else did you tell them?

“It’s a great pity for the world that there should be such causes of kids falling. Causes of falling indeed there must be, but pity help anyone who is the cause of them!” (Matt 18:7)

PRESS: Did you ever prescribe any preventative measures?

“If your hand or your foot should be your downfall, cut it off and throw it away: it is better for you to enter into life crippled or lame, than to have two hands or two feet and be thrown into eternal fire.” (Matt 18:8)

JESUS: I told them:

“And if your eye should be your downfall, tear it out and throw it away: it is better for you to enter into life with one eye, than to have two eyes and be thrown into the hell of fire.” (Matt 18:9)

JESUS: Well, what do you think? I said:

“See that you never despise any of these little ones, for I tell you that their angels in heaven are continually in the presence of my Father in Heaven.” (Matt 18:10)

PRESS: Thank you for the unusual and refreshing clarity of your responses to our questions.

*Michael Hewitt-Gleeson is a Melbourne writer at Vaticanology.net and has been a Vaticanologist for 30 years. 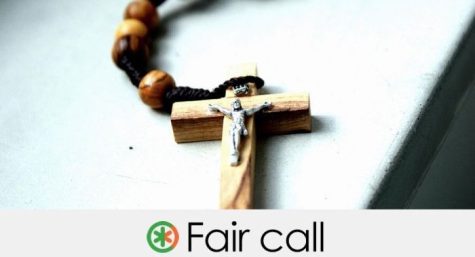 How unfortunate for those Catholic bishops that Matt had a tablet & chisel at hand to record his guidelines. Could Jesus sue or would this come under the Fair Work Commission?

It’s a pity the press didn’t do their research and push Jesus a bit harder in this interview, because if they did then they would have found that He is also a possible cause of abuse going unreported and being covered up by the Church.

PRESS: But didn’t you also say that crimes such as child abuse should only be reported to Police if the accused, when confronted by the Church and the evidence of two or three witnesses, does not acknowledge his wrongdoing?

“‘If your brother does something wrong, go and have it out with him alone, between your two selves. If he listens to you, you have won back your brother.
If he does not listen, take one or two others along with you: whatever the misdemeanour, the evidence of two or three witnesses is required to sustain the charge.
But if he refuses to listen to these, report it to the community; …” (Matt 18:15-17)

JESUS: Umm, yes, but I didn’t mean it like that.

PRESS: And didn’t you also say, in effect, that it didn’t matter how many times the Brother offended, he was still to be forgiven by the Church?

“Then Peter went up to him and said, ‘Lord, how often must I forgive my brother if he wrongs me? As often as seven times?’
Jesus answered, ‘Not seven, I tell you, but seventy-seven times.'” (Matt 18:21-22)

JESUS: I think we will wrap this press conference up now. [Aside: George, get me out of here and back to the Vatican before that bloody Royal Commission serves me with a subpoena!]

Despite my name, I’m neither Catholic, nor Christian.
But, being kind, I’d have to call this whole article an editorial misjudgement.
It adds nothing of value to a serious issue.

I’d have to disagree, Paddy. It shows the rank hypocrisy of a bunch of people who believe that they can dictate others’ moral behaviour – to the extent of enshrining their beliefs into secular law.

I was hoping one of these media types had asked him about this “(voluntary) mandatory celibacy” transmogrification?
And how many of these perpetrators were victims of the vicious cycle of abuse themselves? If so, would they be eligible for compensation?