Good morning, early birds. Cory Bernardi has pulled the plug, and his colleagues have pulled out the insults. It's the news you need to know, by Sally Whyte and Max Chalmers.

BERNARDI OUT, AND SO ARE THE CLAWS

Well, he really did it. After rising in the Senate yesterday “reluctant and relieved” Senator Cory Bernardi confirmed he had left the Liberal Party and would form his own Australian Conservatives Party. Then his colleagues stuck the boot in, with Education Minister (and fellow South Australian) Simon Birmingham calling Bernardi’s move a “dog act”. The Sydney Morning Herald has this handy list of defections that haven’t worked out, which might weight heavily on Bernardi as he sits alone on the crossbench today.

Very few will mourn the end of politicians’ Life Gold Pass after the Prime Minister and Special Minister of State Scott Ryan announced yesterday that the perk, which allows a small number of former MPs to charge their flights to the taxpayer. As Crikey‘s Josh Taylor writes, the change was previously announced by Tony Abbott as PM, but it originally included a phase-out period ending in 2020. Turnbull has ditched the phase out period, saving the government $5 million over the forward estimates.

CHINA: WAR WITH US NOT LIKELY

Yesterday was a big day for Foreign Minister Julie Bishop, who had a phone call with new US Secretary of State Rex Tillerson and also held a press conference with her Chinese counterpart Wang Yi. Despite inflammatory comments by US President Donald Trump’s chief strategist Steve Bannon, Wang played down the possibility of war between the two nations, saying both countries would lose if war were to break out.

“Any sober-minded politician, they clearly recognise that there cannot be conflict between China and the United States because both will lose, and both sides cannot afford that,” Wang said.

Despite Australia Post’s best efforts to keep the salaries of its executives under wraps, it has been revealed that CEO Ahmed Fahour was paid 10 times the Prime Minister’s salary in the last financial year, or $5.6 million. With a salary of $4.4 million and a bonus of $1.2 million, it puts Fahour’s salary well above public servants and politicians. Australia Post is a government-owned business, and documents released to a Senate committee show Australia Post wrote to Senator James Paterson last month to plead for the salaries to be kept under wraps:

“This may lead to brand damage for Australia Post which when operating in a competitive market, may be significantly detrimental to our business and future profitability.”

In comparison, the NBN Co, which is also a government-owned business, paid CEO Bill Morrow $3.6 million in the last financial year — information that was revealed in NBN Co’s annual report in September last year.

Sydney: A man and woman, both aged 19, will appear in the Central Local Court on charges of planning to carry out a terrorist attack. The Daily Telegraph reports the pair have been in custody since late last year and the charges are a result of an investigation by Operation Chillon and the NSW Joint Counter Terrorism Team

Canberra: It’s day two of Parliament’s first sitting week for 2017, and the government is hoping to move ahead with its legislative agenda, including the company tax cut Turnbull is resting his hopes on. The government is also set to pass amendments to the ABCC bill after Senator Derryn Hinch backflipped on a two-year “transition” clause in the bill, pulling it back to nine months. The Australian is spruiking this as a win for the PM and Michaelia Cash (and they really need those today).

Also in actual policy news, the government has committed to concessions to cuts to the family tax benefits scheme, including offering an extra two weeks of paid parental leave, in a bid to pass its childcare reforms.

Sydney: Final public hearing covering the Catholic Church at the Royal Commission into Institutional Responses to Child Sexual Abuse. Yesterday the commission heard from a whistleblower who said he had been punished by the Church for speaking out in the 1980s. Today the commission is set to hear from Brisbane Archbishop Mark Coleridge.

Perth: The Western Australian election campaign rolls on, today the state’s treasurer and shadow treasurer will speak at a lunch on their economic plans.

Brisbane: The Climate Council will release a new report on “Cranking up the intensity: Climate Change and Extreme Weather events”. It predicts more extreme weather events are on the way due to climate change.

Conservative principles and values are being trashed — Paul Kelly (The Australian $): “The conservative side of Australian politics is now devouring itself, consumed by personal aggran­disement, ideological delusion and populist fervour in an upheaval likely to destroy the Turnbull government, deliver power to the Labor Party and generate a structural split among conservatives that will weaken their cause for years to come.”

You can thank PM for Bernardi split, rise of One Nation — Rita Panahi (Herald Sun $): “The Liberal party has long prided itself on being inclusive of a wide spectrum of values but while it’s well and good to be a broad church, at some point you have to stand for something.”

Cory Bernardi didn’t betray anyone. The Liberal party did — Miranda Devine (The Daily Telegraph $): “Cory Bernardi is doing the Liberal Party a favour in the long term, by ensuring that conservative voters have a palatable choice. If he’s a threat, it is to Hanson and her successors on the right.”

Hypocritical Cory Bernardi gamed the system. He must quit the Senate — Alan Stokes (Sydney Morning Herald): “He entered Parliament thanks to a disgraceful rule that allows party hacks like him to be chosen by party head office – not grassroots members and certainly not voters – to replace departed senators”

Derailment of great gravy train a favour for all, even MPs — Phillip Hudson (The Australian $): “As for the complaint from the cranky Queensland duo of Warren Entsch and Ian Macdonald that the rules have been unfairly changed on them, welcome to the world that pensioners and Centrelink customers inhabit after every budget.”

The Syrian government allegedly secretly hanged as many as 13,000 people in the Saydnaya prison between 2011 and 2015. The allegations are documented in a report by Amnesty International, which interviewed 84 people including four former guards and a military judge. Amnesty said prisoners were given minutes-long military show trials before being executed en masse and that orders were signed by the Minister of Defence on behalf of President Bashar al-Assad. — The Guardian

At least 20 people have been killed by a bomb attack on the Afghan Supreme Court. While no organisation has claimed responsibility for the explosion, the Taliban has previously attacked the Supreme Court as well as other judicial and legal targets. The Afghan government controls just two-thirds of the country and has struggled to hold territory from the Taliban since the withdrawal of NATO troops in 2014. — Reuters 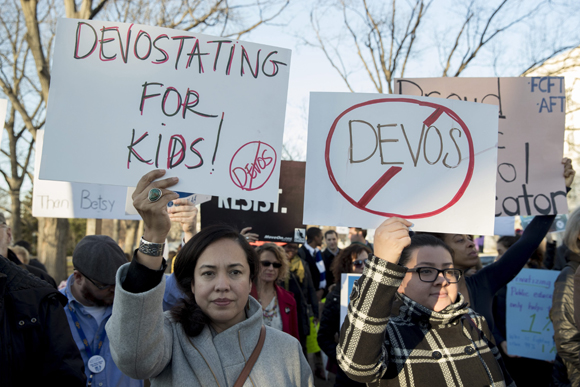 Betsy DeVos, Donald Trump’s pick to lead the federal Education Department, has been confirmed by the US Senate, but only after Vice-President Mike Pence was called in to cast a tie-breaking vote. Two Republican senators voted against DeVos’ confirmation after she struggled to answer basic questions during a committee hearing and was attacked for the hundreds of millions worth of donations she has made to Republicans. This is the first time a Vice-President has been forced to break a tie on a cabinet appointment, a sign Trump might not always get his way in the Republican-held Senate. — New York Times

Former French President Nicolas Sarkozy will stand trial for allegedly misusing public funds during his failed 2012 re-election campaign. Sarkozy’s could face up to a year in prison if convicted, but his lawyer dismissed the charges as inane. — Reuters

Trump and staff rethink tactics after stumbles (New York Times): “[Trump] often has to wait until the end of the workday before grinding through news clips with Mr. [Sean] Spicer, marking the ones he does not like with a big arrow in black Sharpie — though he almost always makes time to monitor Mr. Spicer’s performance at the daily briefings, summoning him to offer praise or criticism, a West Wing aide said.”

White House rattled by McCarthy’s spoof of Spicer (Politico): “More than being lampooned as a press secretary who makes up facts, it was Spicer’s portrayal by a woman that was most problematic in the president’s eyes, according to sources close to him.”

You’re fired: political discourse in the age of Trump (Baffler): “Indeed, people who try to get others fired, no matter how feminist or woke their reasons, should just go ahead and join the alt-right. They’ll easily find comrades who appreciate their tactics.”

Robot rights: at what point should an intelligent machine be considered a ‘person’ (The Conversation): “Assigning rights and duties to an inanimate object or software program independent of their creators may seem strange. However, with corporations we already see extensive rights and obligations given to fictitious legal entities.”

Refugees crossing into Canada from US on foot despite freezing temperatures (The Guardian): “Both men ended up in hospital; Mohammed had to have all of his fingers amputated, while Iyal lost all of his fingers except for his thumbs to frostbite.”

“Any sober-minded politician, …”, that qualification scares me given the current state of affairs.