Being a postie pays well. Australia Post learnt the hard way today that making an effort to hide information just means everyone is much more interested in it. After questioning from Senator James Paterson in Senate estimates and a series of letters in which the government-owned business claimed AusPost boss Ahmed Fahour’s pay should not be released due to commercial sensitivities, we finally got the truth. “This may lead to brand damage for Australia Post which when operating in a competitive market, may be significantly detrimental to our business and future profitability,” Australia Post claimed. The organisation also claimed it should be given a week’s notice as to when the figure — 10 times the prime minister’s salary at $5.6 million — would be released.

Paterson told Crikey today that the committee was satisfied with the executive pay disclosures made by other organisations under its remit, like the ABC, SBS and NBN Co, but said that Australia Post would likely face a grilling in the next round of estimates later this month.

There was no explanation of why the figure couldn’t be revealed for the 2015-16 financial year — it has been made public every other year. Fahour was near the top of a Crikey list last year of best-paid public servants, reportedly taking home just $1.75 million in 2014 — he gave up his $2 million bonus that year. In 2012-13 he earned $4.8 million, including a bonus. That means he’s had an $800,000 raise in four years — considering wage growth isn’t going far everywhere else in the country, that’s a pretty good deal.

An intimate evening with Warnie(ey?). Former cricketer Shane Warne has decided to embark on a speaking tour in order to tell the “truth” about his life, after a series of unauthorised biographies and headlines about his charity have painted a less than rosy picture of the spin king. In a series of events that are meant to be “intimate” at venues like Hamer Hall and the Sydney Opera House, Warnie says he will be honest about everything — even if it doesn’t reflect well on him. “You’re gonna get me no holds barred. The whole truth,” he says in the Herald Sun. Warne, whose Instagram profile reads “Ex sportsman, now a poker player & cricket commentator. In reality, just a single dad doing my best & love my 3 children to the sky & back” has also created a website that seems confused about whether his nickname is spelled “Warney” or “Warnie”. It promises “the whole truth and nothing but the truth” next to an image of a judge, in what seems to be a homage to Judge Judy. Tickets start at $99 and go up to $399 including “60-90 mins of alcoholic refreshments and canapes” and “chance to say hello to Warney”. What will we learn? 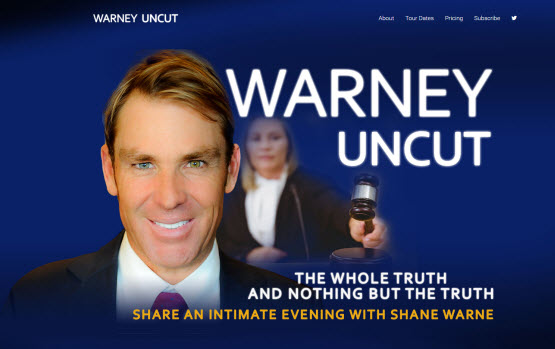 Political jingles are back in style. Here at Crikey we love a political jingle, and we’re so glad to hear that the Western Australian election has not left us wanting. Liberal candidate for the seat of Thornlie Rob Coales has released a promotional song that brings the perfect amount of cringe to the campaign. The video, linked to here on the West Australian, includes “Thornlie is Rob’s number one, family safety means a tonne” along with many other rhymes and a reference to his former career as a police officer: “at law and order Rob’s a gun”. It seems obvious that Coales knows how to have a laugh at himself, with this image accompanying a line claiming he’s lots of fun: 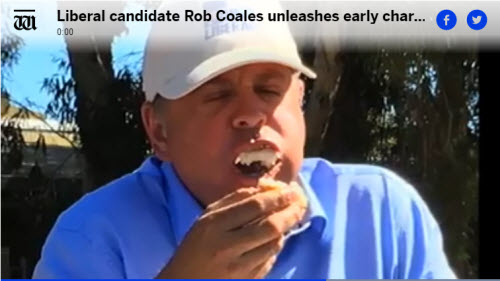 Being a postie pays well … their explanation would be all very well if it were only true. But Australia post is a government-owned monopoly. Here’s a thought (a small part of a larger philosophy): I reckon there’s a bunch of up-and coming talented not-yet CEO’s out there who might take the job for, say $500,000 for a year or two before they go on to a $6M job based on their success at Australia Post. See it as a traineeship!