A broad church minus one. At St Christopher’s Cathedral for the Ecumenical Service for the Commence of Parliament in Canberra this morning, there was one noticeable absentee.  Coalition MPs, including the Prime Minister, rushed into the service at 7.30am this morning. There were a few late shows, including deputy leader Julie Bishop, who power-walked up the stairs of the church, keen to skip the media pack asking questions about the Judas in their midst.

As the national anthem got underway (the full one, not just the usual short one), Immigration Minister Peter Dutton arrived late, just after that awkward line “for those who’ve come across the seas we’ve boundless plains to share”.

While Prime Minister Malcolm Turnbull and Opposition Leader Bill Shorten delivered readings, advance people and security kept watch outside as TV news reporters did their crosses on a drizzly morning in Manuka. The sound of prime ministerial Comcar C1 starting — with its unfurled Australian flag — signaled it was time to go. When it was all over at 8.30, the PM did not speak to the media when departing with wife Lucy. Shorten made a brief statement setting out his intentions for the start of Parliament, as MPs from both sides made their way out of the church.

Only Dutton could be drawn to comment. The leader of the Monkey Pod lunches suggested on his departure from church that the Coalition was a broad church, which was interesting as the church itself was absent one Cory Bernardi. The Senate’s opening prayer at 12.30 today is likely one of the most attended in recent history as Bernardi took the plunge and announced his intention to split from the Coalition and sit on the crossbench.

Shoppies connection leads to FIFO staffer job. Flying in and out of Australia’s capital cities is a lifestyle well known to many political staffers, but there’s usually someone who gets to avoid the FIFO life — the electorate officer. This isn’t the case for Don Farrell’s new electorate officer, who is making a weekly trip from Melbourne to fulfill her duties at the front desk. Ms Tips has learned that Dimity Paul, a former staffer in the Victorian government and member of Farrell’s Shoppies’ union faction, is doing the long commute — although we are assured she’s funding the flights herself.  If Paul’s name sounds familiar, it is because she was previously chief of staff to former Victorian Small Business Minister Adem Somyurek, who was stood down from the role after Paul’s complaint that he bullied her by shaking her chin while reprimanding her was upheld. It’s an interesting choice for Farrell to get a ring-in, — he is so dedicated to promoting South Australians he makes an effort to drop stories or give comment to journos from his beloved home state.

Hello, my name is Sister Bronwyn. Former speaker Bronwyn Bishop was among the rich and famous at the Book of Mormon opening night gala in Melbourne on Saturday night. Our tipster tells us the regular attendee at such soirees posed for a photo with a fan — the man behind the lens, though, was enthusiastic comedian John Safran. Collingwood president Eddie McGuire was there, so we can add musicals to the list of events he prioritises over seeing one of his own footy teams play. Also spotted in attendance were Rhonda Burchmore (it’s not a real premiere without her) and ABC personalities Virginia Trioli and Leigh Sales.

Clive says goodbye. While Clive Palmer is no longer on the political scene, he knows he still has a contribution to make. This morning, in the canon of his goodbye videos, Palmer recorded one for Senator Cory Bernardi after it was confirmed that the South Australian was leaving the Liberal Party. 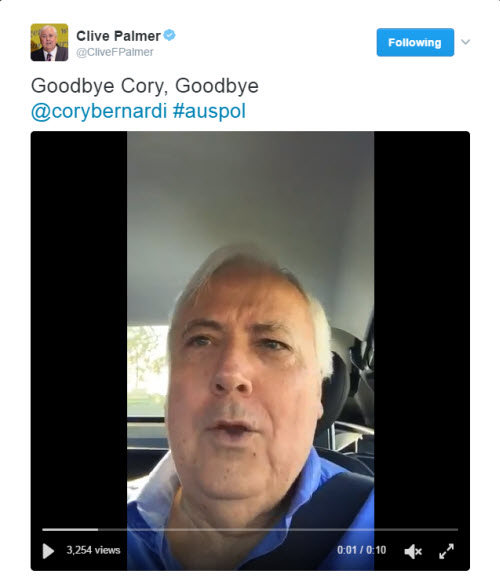 He also tweeted a poem for Bernardi:

No ad revenue for you. Australian Signals Directorate —  the agency that advises government on cyber security — released its updated strategy guide to mitigating cyber security incidents on Monday, and it is bad news for online news sites reliant on advertising to support them. The guide states that in addition to uninstalling Adobe Flash (which should be an obvious piece of advice) agencies should block all internet ads just in case they have malicious advertising. The Department of Health will struggle to do its job without access to that one weird trick to reduce belly fat. But don’t despair — if the agency likes a particular media outlet, “some organisations might choose to support selected websites that rely on ads for revenue by enabling just their ads and potentially risking some compromise”. How nice. We know that ads have yet to be blocked because last year, in response to a question on notice from Senate estimates, Immigration Minister Peter Dutton’s office disclosed a number of ad sites in their top website hits, alongside Dutton’s favourite “hate media” Fairfax.

Kissed by a rose shortage. A caller to 3AW has warned that Melbourne could be in short supply of an important commodity next week. February 14 is Valentine’s Day, meaning many people will be in need of the particularly symbolic flower, but there may be much less supply than demand. Now could be the time to start thinking of alternative gifts.

Accountants ready to storm the ATO. While the issues with the census website got a great deal of attention, less covered has been the ongoing issues with the Australian Tax Office website. Public outrage doesn’t get to quite the same fever pitch when only accountants are affected. After yet another “unscheduled outage” at the end of last week, our friends at SmartCompany report the website only just went back online yesterday morning. However, the ATO warned users that issues were expected to persist — not good news, when it seems they don’t actually know what has gone wrong. This follows nearly two months of intermittent crashes since last December. Even once the website problems are resolved (whenever that happens) the ATO might not be entirely out of the woods, with SmartCompany reporting that many tax agents and accountant have been calling for compensation for lost income resulting from the outages.

We hear a great deal about the Liberal’s ‘broad church’ (eg: Brandis takes every opportunity to mention it). However, if Cory Bernardi mentions ‘the tent’ once more today it will be once too often.

Be fair, he’s so full of piss & wind that it’s gotta be let go somewhere, in or out.