Good morning, early birds. It's the first day back at school for pollies, but Cory Bernardi doesn't want to play nice. It's the news you need to know, by Sally Whyte and Max Chalmers.

TAKING LEAVE OF HIS (COMMON) SENSE

Liberal MPs are pleading with Cory Bernardi to stay inside the party, as the South Australian senator looks set to announce to the Senate that he is jumping ship just seven months into a six-year term. The new party, believed to be called the Australian Conservatives, so far seems to be a party of one, with other conservative MPs like George Christensen and Eric Abetz saying they have not been approached to join the party and will not do so.

“The point that Cory needs to reflect on is he is in the Parliament by virtue of the endorsement of the South Australian Liberal Party,” Energy and Environment Minister Josh Frydenberg said on the ABC’s Q&A last night.

Fairfax’s Latika Bourke reports Bernardi is furious with former prime minister Tony Abbott, after Bernardi confided in his fellow conservative in December last year, only to find the headline “Bernardi on the brink of Libs split” on the front page of The Australian on December 22. Abbott has denied leaking to the Oz.

Sarah Martin writes that Bernardi knew he would defect before last year’s election, where he was elected to the Senate for South Australia after Education Minister Simon Birmingham but that it was the months in New York towards the end of the year that ensured he took this path.

We’ve heard from almost everyone except Bernardi himself on this — now it’s time for him to finally make his move after years of threats.

We hear “Senator” Rod Culleton was on an early-morning flight to Canberra this morning. Looks like someone thinks he might steal Cory Bernardi’s headlines.

The Catholic Church has revealed an astonishing 7% of priests working between 1950 and 2009 have been accused of sex crimes against children. The percentage in the general male population as a whole is 1-2%, and that figure includes sex crimes against adults. Reports Dan Box in The Australian: “In many dioceses and religious orders the figure is even higher. Forty per cent of St John of God Brothers, who ran boarding schools for boys with learning difficulties across Victoria and NSW, were alleged offenders. More than one in five of the Christian Brothers and Marist Brothers, who founded many schools across the country, were also alleged perpetrators, the figures reveal.” In some diocese more than one in 10 priests have been accused. The Church released the figures as part of the Royal Commission into Institutional Responses to Child Sexual Abuse. Meanwhile, the Office of Public Prosecutions is considering allegations Cardinal George Pell himself is guilty of sexual abuse.

Seven’s battle with Amber Harrison is far from over, with the former employee starting a Twitter account and making a statement to the ASX claiming the company had misled the market. Last week Seven announced an investigation into the actions of CEO Tim Worner, who had an affair with Harrison when she worked at the company, had found he was in the clear. Harrison labelled the report a “whitewash”, and accused Worner of being affected by drugs at work functions.

Harrison’s Twitter profile reads “Channel Seven demands my silence under legalities of two contracts they won’t honour so instead I’ve joined twitter to chat to Jeff Kennett“. So far all of her tweets have tagged the former Victorian premier and current member of the Seven board and include photos of what she calls evidence in her claims of being wronged by the company.

It’s hard enough for the government to stay on message, so now Deputy Prime Minister Barnaby Joyce has told ministers to keep mum on the topic of marriage equality, after news that moderate backbenchers would push for a free vote in Parliament in the next few weeks. Joyce read the riot act to his colleagues, the Oz reports, with one person present saying: “He said if we continue to be distracted by issues which only appeal to people in George Street and Oxford Street but not in the outer suburbs and the regions, things will not improve.”

Canberra: Parliament sits today for the first time in 2017, and while the government was hoping to start on its legislative agenda, Cory Bernardi’s defection will take over the halls of power. The Australian Financial Review reports the government is considering a compromise that would allow recipients of family welfare benefits to keep their full benefits in a bid to pass childcare reforms that have been stalled for years.

Sydney: The Reserve Bank of Australia will hold its monthly board meeting. In the first meeting of the year, it looks likely the bank will leave interest rates where they are, at 1.5%.

Canberra: The High Court will sit as the Court of Disputed Returns to hear the challenge on the validity of former Family First Senator Bob Day. The Adelaide Advertiser reports creditors have taken out 22 caveats against Day’s own home in a bid to get back money owed after his home building business went into liquidation.

Sydney: The trial of Ian Macdonald and John Maitland for misconduct resumes today. Yesterday the court heard former minister Macdonald put the interests of his mate Maitland ahead of the state, the Sydney Morning Herald reports.

The threat posed by Cory Bernardi isn’t that serious — Laura Tingle (Australian Financial Review $): “Well off you go, Cory. Turn off the lights as you go will you? And perhaps apologise to the preselectors and voters who guaranteed you a six-year Senate spot just eight months ago.”

Pressure on Turnbull to put lid on dysfunction — Simon Benson (The Australian $): “The real impact is derived from the symbolism. Bernardi adds another voice on the extremities of the Right that lays claim to a mainstream movement. He can be openly critical of Turnbull, as one colleague has said, while fishing in the same pool for votes.”

Tony, time to tame the Pauline — Cate McGregor (The Daily Telegraph $): “[James] Ashby believes that Tony Abbott is the only Coalition politician who has the same potential as his boss to influence populist conservatives.”

The New England Patriots have claimed their fifth Super Bowl victory, securing a stunning come-from-behind win over the Atlanta Falcons. Trailing 28-3, the Patriots set a record by overcoming the deficit and leveling the game, pushing the match into overtime. From there they scored the winning touchdown, making 39-year-old quarterback Tom Brady the first to win five Super Bowl titles. The outcome was a double victory for Donald Trump, who was not explicitly rebuked during Lady Gaga‘s halftime performance and is friends with Brady and Patriots’ coach Bruce Belichick. — Boston Globe

The Kremlin is demanding an apology from Fox News after popular conservative host Bill O’Reilly called President Vladimir Putin “a killer”. O’Reilly made the comment in a pre-Super Bowl interview with President Donald Trump, provoking Trump to respond: “There are a lot of killers… What, you think our country’s so innocent?” In a statement the Kremlin described O’Reilly’s remark as “unacceptable and insulting”. — Reuters

The number of civilian casualties in Afghanistan in 2016 was higher than any year since 2001, a UN report has found. The majority of casualties were blamed on anti-government groups, primarily the Taliban, with civilian casualties increasing as Islamic State takes a hold in the country and fighting occurs more regularly in cities and towns. The number of children injured or maimed rose dramatically, with unexploded ordnance proving particularly dangerous. The country has had a difficult start to 2017: recent avalanches in mountainous areas killed more than 100 people. — The Guardian

French Presidential candidate Francois Fillon has apologised to the French people for employing his wife in his parliamentary office. Formerly considered the frontrunner, Fillon denied he had broken the law in and vowed to fight on in the face of intense criticism and declining poll numbers. — BBC

How Kellyanne Conway became the greatest spin doctor in modern American history (The Week): “Conway‘s twin messages seem to be: “Bring it on, I can take you” and “you’re not playing fair.” The deck is stacked against me and everyone watching knows it, she seems to say, but I’m ready to play anyway, because that’s how right I am. It’s an affect that makes her seem scrappy, put-upon, tolerant, even noble.”

It’s about time someone attacked Australia. Thank you, President Trump. (Washington Post): “I was momentarily puzzled: Why go from a fully justified attack on Australia to the ayatollahs and then to Arnold and ‘The Apprentice’? Then the brilliance of Trump’s strategy came into focus: He is taking an alphabetical approach to Making America Safe Again.”

The women who could save Mosul (Foreign Policy): “Some of the social problems the parliamentarians have set out to tackle are specific to the occupying force responsible for creating them, the Islamic State. Thousands of children, for instance, may have been born as a result of rape by foreign jihadi fighters — they now risk growing up fatherless, as social pariahs.” 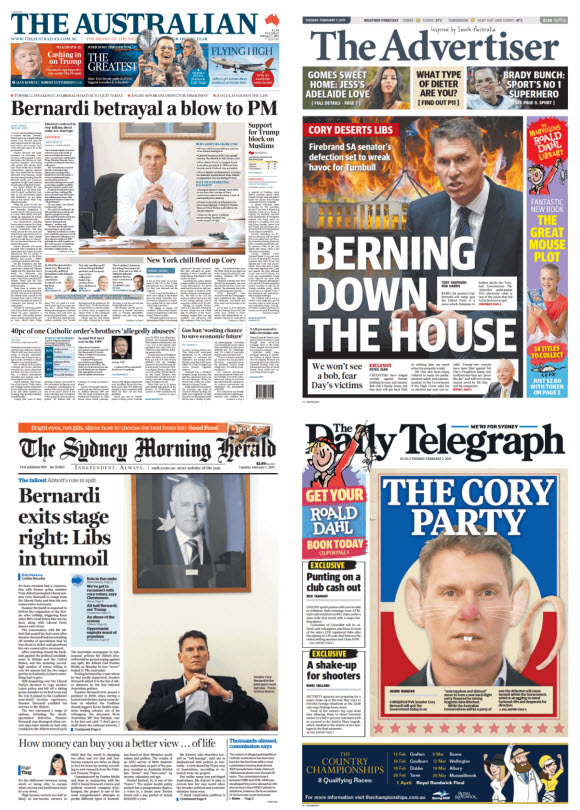