Putin’s best Aussie mates. While Liberal National Party MP and limacine mouth-breather George Christensen is best known for his loathing of Muslims, yesterday he revealed hitherto-untapped depths of foreign policy expertise. Inspired by Donald Trump’s lauding of Russian dictator Vladimir Putin, Christensen was moved to tweet in support of the Kremlin’s annexation of the Crimea on the basis that some Russians lived there.

As one of his interlocutors pointed out, that’s exactly the logic Hitler used. Or, it might also have been noted, that Slobodan Milosevic used to justify ethnic cleansing and mass extermination in the former Yugoslavia. Christensen then tweeted articles suggesting the United States was supporting terrorist groups and helping Islamic State. This morning, Christensen’s intellectual mentor Pauline Hanson was similarly supporting the Putin regime. Remember the good old days when, if nothing else, you could rely on right-wingers to be resolutely anti-Russian?

A public event no journos allowed. Our friends at The Mandarin do an admirable job reporting the ins and outs of the Australian public service — except when public servants turn up to speak at a public event but ask that the journos be kicked out of the room. Ms Tips’ colleague David Donaldson filed this dispatch on Friday afternoon:

“Today marks the 50th anniversary of the last execution performed in Australia, when Ronald Ryan was put to death in Melbourne’s notorious Pentridge Prison (which is now filled with apartments). To commemorate the day, the Law Council of Australia has called on the federal government to implement recommendations from a parliamentary report to prevent the AFP cooperating in international situations involving the death penalty, and to implement a new strategy for the global abolition of the death penalty.

Yet some evidently remain sensitive about the issue: despite having been invited to cover the event, The Mandarin was booted — albeit rather politely — from a panel session discussing government perspectives on abolition, featuring representatives from DFAT, the EU Delegation to Australia, the AFP and the British Consulate.”

Preselection smoke and mirrors. A tipster has an interesting story about Liberals lining up for preselection ahead of the 2018 state election in Victoria:

“Although the next Victorian state election isn’t until November of next year, Liberal preselection talk has already started to build up around the state’s most marginal seat, Eltham, in the north east of Melbourne, held by Labor’s Vicki Ward. Banyule Councillor Steven Briffa retired in October last year, announcing in his farewell speech that he was still very keen to become the next MP for Eltham, having been the Liberal candidate in 2014. Upper house MP Mary Wooldridge also has her eye on the seat, as both a way to get out of the upper house (a consequence of a botched attempt to be preselected for Kew in 2014) and further her leadership ambitions. And finally, Peter Clarke, just elected to a four year term on Nillumbik Council in October, and currently serving as Mayor, is also reportedly keen to finally enter Parliament, after a preselection attempt on the seat of Warrandyte in 2006.”

Another tipster has poured cold water on the rumours, believing it’s unlikely Wooldridge would put her name forward. A source says rumours about Liberal preselections are coming from Labor — trying to transfer the heat?

Volunteers needed as punching bags. Foxtel is throwing its weight around this morning with legal threats against a man who live-streamed the boxing match between Anthony Mundine and Danny Green on Friday night. The bout was a pay-per-view event on Foxtel, meaning subscribers had to fork out on top of what they already pay the TV provider. A lawyer has told the ABC the people who re-broadcast the event could face fines up to $60,000 or five years in prison. A tipster tells us Foxtel was woefully under-prepared for customer demand on Friday night, with a memo sent out to staff who don’t normally answer customer service calls asking them to stay back until 9pm on Friday night — in a volunteer capacity. The following email from Foxtel group director of sales and customer experience Marco Miranda was shared with Ms Tips (first names mentioned in the email have been changed):

“In a Foxtel first we’re also challenging the norm and asking non-phone-facing staff to roll up their sleeves and jump on the phones on Friday 3 February. Whether you’ve worked on the phones before or not, we’re looking for volunteers to take Main Event calls from 4-9pm AEDT. Not only is this a way to support the Contact Centre during a really busy time, it’s a great way for you to see first-hand what it’s like dealing with customers and connecting them to all the stories they love.

In Robina, Mark, John and other leaders will each be grabbing a headset to take calls, while in Moonee Ponds, Tim and I will be logging on to make some sales ourselves. But it won’t all be work. We’ll have the Main Event on TVs around the Contact Centre, and provide some snacks and games to keep you going. Please register on FLASH. Note that this is a volunteering gig and there won’t be any overtime or time in lieu for non-phone-facing staff.

Once you’ve registered you will receive an email with further details, including a link to an eLearning course that will teach you how to order Main Events, in addition to information on how to login to CORE, key selling points and important privacy requirements.

I encourage you all to sign up for a couple of hours on the phone to support our business, and to experience first-hand ‘life on the phones’.”

That doesn’t seem like a way to get on the good side with staff.

Committed to you, kind of. Channel Nine is spruiking its new regional push, but a television advertisement claiming the network is all about representing local issues has rubbed one tipster up the wrong way:

“Nine’s new regional news service for Wollongong isn’t off to the best of starts … its new promotion says they’re ‘committed to your city’ but if you have a closer look, the news reader is standing in front of parliament house in Canberra when she says how committed she is to the Illawarra and the pictures in the earlier part are from Canberra including the ACT police. What a joke!”

Former ABC weather presenter Vanessa O’Hanlon can clearly be seen in front of Parliament House in the video, which is around 250 kilometres from Wollongong. 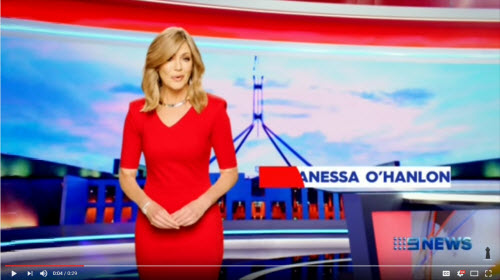 To be fair, the ad also says the local bulletins won’t start until Febraury 13 — maybe they just don’t have the local footage yet.

Fight of the century: how boxing shaped modern media

Foxtel asks for volunteer phone operators to be punching bags

If Putin is a “dictator” as you put it, how do you account for the fact that he won three free elections (as judged by the OSCE), and stood down for a term because the constitution did not permit more than two consecutive terms?
Do you actually know anything about the history of Crimea? Your ignorance on this point is another example of lazy journalism masquerading as smart alec commentary.

Vladimir Putin, as well you should know, deftly got around that little problem by running- twice -and succeeding as President. The third time he stood as Prime Minister of Russia, once again successfully.
As for the question of “dictator”…..Some 15 years as head man in the KGB-before it had a name change-what better grounding could a leader have than to use a vast network of knowing where all the bodies are, potential and otherwise, to impose one’s will?

Venise, everything he did was as per the constitution, not a mark of dictators. So what that he was a Colonel in the KGB. That does not make him a killer. As always, where is the evidence?

limacine?
adjective :of, or relating to slugs, esp those of the genus Limax

Most excellent usage. And I’ve learnt a new word/insult

“Volunteering” for the Murdochs?! Sure, if they’ll “volunteer” me some of their billions.