Press hear what they want to in Trump-Turnbull phone call

Is Donald Trump a bully? Is Malcolm Turnbull a coward? Or should we not have refugees on Nauru and Manus Island to begin with? It all depends on your point of view, writes freelance journalist John Martinkus.

It is the story in every paper and on every channel. Trump and Turnbull (or Trumble, according to White House spokesman Sean Spicer) is everywhere. But how it’s being reported shows battle lines are being drawn.

The Herald Sun didn’t mince words on the front page: “Trump’s message to Turnbull … You’re fried”. That pretty much sets the tone for what is inside. Columnists Andrew Bolt and Rita Panahi both get a run, with Bolt on page 5 declaring that the Turnbull had been “dumb” to try to resettle refugees in the US and that he should now know not to mess with Trump. The editorial and Panahi and Tom Elliot’s columns ran with the line that Turnbull had made a mistake with the deal with Obama, and Trump had outsmarted him. Similar material appeared in The Daily Telegraph, where the tone was that Turnbull got what he deserved for making a deal with Barack Obama over the refugees on Manus and Nauru. 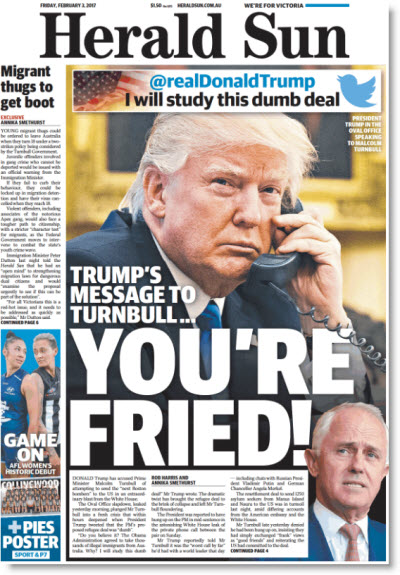 That sentiment was repeated by certain columnists in The Australian. The same writers notable for their unquestioning support of the US-led Iraq war in 2004, Greg Sheridan and Paul Kelly, spoke of the bold move by Trump to question what he considered a “dumb deal” but also tended to veer slightly towards what seems to be The Australian’s position that Turnbull, although he had made an honourable attempt to resettle the refugees, had misjudged the deal by dealing with Obama and not Trump. The right centrist position was reflected in the editorial and in some ways was making excuses for both Trump and his public questioning of the deal and for Turnbull in pursuing it.

Which brings us to the second position: Turnbull was right to stand up to Trump over the refugee issue. This was voiced by opinion writers like Peter Hartcher and David Wroe at The Sydney Morning Herald, who argue that the Australian US alliance is strong and important for both countries and should not be jeopardised by this incident and the question of whether the refugee deal should be honoured. They defend the value of the alliance. Pundits like Mark Kenny at Fairfax point to the revelations of the leaked phone conversation as evidence that the Prime Minister stood up for Australia’s interests by pursuing the refugee deal.

Writers like Fairfax’s Daniel Flitton and even former foreign minister speculated on how this incident would affect the way Australian officials and diplomats dealt with the Trump White House and recommended a shift in Australia’s thinking about the US alliance. While still generally supportive of the alliance and the refugee deal and Turnbull’s behaviour towards Trump, these writers recommended an examination of renewed US priorities under Trump and how Australia should deal with it.

Then of course we have the third group, as articulated in the editorial of the Australian version of The Guardian today, this response to the whole leaked phone call and subsequent tweet points out this should not be an issue. The refugees should be brought to Australia and it should have happened a long time ago.

Interestingly enough The New York Times ran a very long analysis and background piece by senior writer Jane Perlez on the legality or illegality of Australia’s offshore detention program, and it was accompanied by video testimony of those still incarcerated on Manus Island. Around the world the BBC ran the story prominently, with reports detailing the plight of those detained and the hopelessness of their situation if the refugee swap deal was not honoured. Internationally the story focused more on the consequences for the asylum seekers rather than the domestic political angle.

So there you have it. Support Trump, support Turnbull or reject the whole concept of shipping people around the world for political gain and by the way they shouldn’t be in these tropical gulags in the first place. But why was the call leaked in the first place? Was it to shore up Trumps tough stance on immigration domestically? Was it to assert his authority over a junior minor ally? Given it will be the first time many in the US would have heard of Australia’s offshore processing is it to make some kind of domestic political point for Trump? Either way Australia has come across a bit like Trump’s loyal but aggrieved lapdog yapping at the Donald’s heels.

How anyone interpreted this phone call as Turnbull standing up to Trump is beyond me. That is some mighty convoluted spinning to come up with that.

This was the bloke who ran the Spycatcher case. Gawd. Still Murdochs and their ilk have always been good at spin.

How about we tell the Donald, since we get nothing from Howard and Vaile’s idiot Free Trade (of our rights) agreement, to shove it and get big US pharma out of our PBS?

Meantime Joe Hockey is at the White House doubtless discrediting Trump’s ‘future Boston bombers’ theory & explaining what ideal citizens the refugees will be with their valuable contribution to US society .

Thereby making the precise argument why they should be settled in Australia. Go, Joe, put your foot right in it.

We’ve got our best man working on it…

I thought Stan Grant put it into perspective on Friday night’s 7:30 interview with Fluffy Pyne :-
There was Fluff, drooling and slavering away, telling the world “what Malcolm did” and Grant simply asked him how he knew so much/exactly what transpired during that call?
Of course Fluff “knew” about as much as everyone else – three fifths of FA – that which was chosen to be passed on – and had to admit it …… Wait ’til Erica gets a load of that? Pyne (one of Erica’s) made to look bad, tripped up over his own words and assertions?

The sad thing is that sort of “good for the goose/gander” ends when LNP bobby-soxer & groupie Sales resumes her seat on Monday – to indulge her Limited News Party politics.

Erica AND Rupert, of course.