Good morning, early birds. Trump backtracks slightly as Australia reels from the fallout of a tense time in the "special relationship" in the US. It's the news you need to know, by Sally Whyte and Max Chalmers.

US President Donald Trump has changed his tone following a tweet yesterday in which he called the refugee settlement deal between Australia and the US “dumb”, and leaks to The Washington Post revealed a phone call between Trump and Turnbull was terse and ended earlier than scheduled.

Prime Minister Malcolm Turnbull insisted Australia’s relationship with the US was still strong and the deal would go ahead following the report, and he continued to do so even after Trump tweeted: “Do you believe it? The Obama Administration agreed to take thousands of illegal immigrants from Australia. Why? I will study this dumb deal!”

Overnight, Trump press secretary Sean Spicer described the call as a “very cordial conversation” in answer to a question from the ABC’s Zoe Daniel. Spicer also said “the President is unbelievably disappointed in the previous administration’s deal that was made and how poorly it was crafted”. He reiterated Trump’s “tremendous respect” for both Turnbull and Australia, while Trump himself has said ” the previous administration does something, you have to respect that, but you can also say why are we doing this?”

We’ll leave the last word on this one to Greens Senator Scott Ludlam: 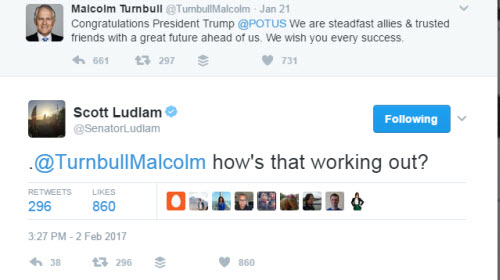 THE DONATIONS WE CAN’T TRACE

While the PM revealed he had given $1.75 million to the Liberal Party last year, and donations data has revealed a lot about where the money comes from, this is only half the picture. As my colleagues Bernard Keane has pointed out, donations declarations are not the same as a full financial statement, and the lag between the donation and declaration is a problem for transparency. Fairfax’s Adam Gartrell reports today that $70 million of the funds donated to the Liberal and Labor parties in the last financial year is untraceable because it came from “associated entities” or was below the reporting threshold. “Only 13 per cent of the Liberal Party’s income and 21 per cent of Labor’s income is clearly attributed to specific donors,”  Dr Lindy Edwards says in the story.

Melbourne: The AFL Women’s competition kicks off tonight, with Collingwood taking on Carlton at Ikon Park. The inaugural competition features eight sides, and the grand final will be played in March.

Canberra: The Productivity Commission will release a report on education funding today, and the results are already leading to a war of words between state and federal politicians. Education Minister Simon Birmingham has called reductions in funding in some states “trickery”, The Australian reports. The Age reports Victorian students receive “the least government funding per student in Australia”

Canberra: The High Court will deliver its decision on whether former One Nation “Senator” Rod Culleton was elligible to be elected last year. If the court does find that Culleton was inelligible, it will also have to rule how a replacement senator will be decided.

Townsville: Deputy Prime Minister Barnaby Joyce will face up to angry farmers affected by government plans to acquire grazing land outside Townsville as part of a lucrative defence expansion with Singapore.

Melbourne: A vigil will be held to mark the fiftieth anniversary of Ronald Ryan‘s hanging. The Law Council of Australia will also hold a national symposium on Australia’s Contribution to the Abolition of the Death Penalty.

Adelaide: Anthony Mundine will take on Danny Green in a bout at Adelaide Oval. Boxer Mundine has already courted controversy before a punch has been thrown, saying he won’t stand for the national anthem.

Is Donald Trump a man we can trust? — Paul Kelly (The Australian $): “Will Trump back out of the deal? Nobody knows. Maybe Trump doesn’t know. But the stakes are now extremely high. This goes to the character of the two leaders, Trump and Turnbull, and prospects for US-Australia relations under Trump.”

Trump’s wake-up call to our starry-eyed leaders — Bob Carr (The Australian $): “Now we know where we stand — in a category that includes Mexico and Germany, friends of the US who’ve been disabused by its new President.”

Turnbull’s missed chance to endorse changes — Chris Kenny (The Australian $): “While virtually all of the political/media class seemed to be admiring Malcolm Turnbull’s restraint in not criticising Donald Trump’s immigration changes, my analysis was that he missed an obvious opportunity to offer the US President some international endorsement.”

About that call to Australia . . . — Yvonne Abraham (The Boston Globe): “The other thing is, Trump and Australia have way more in common than he seems to grasp. A lot of people in Australia fear and dislike Muslims just as much as he and his supporters do. And if anything, Australia has been even more heartless with refugees than he has (so far).”

Trump is only finishing what Hollywood and the media started — Waleed Aly (The Age): “[Trump] can treat Muslims in a grossly undifferentiated way because that’s largely the way public culture has trained us to see them.”

Ill wind is blowing in energy and climate policy debate — Frank Jotzo (Sydney Morning Herald): “A new high-efficiency coal plant run on black coal would emit about a quarter less carbon dioxide than an equivalent old plant. It emits up to twice as much as a gas-fired plant, without the advantage of flexibility that gas plants give. It emits 10 times or more what a carbon capture and storage plant would.”

Further details have come to light about a botched US intelligence-gathering mission in Yemen. It now appears likely the raid left several civilians dead, along with one US officer and 14 al-Qaeda fighters. It was supposed to be a surprise attack, but al-Qaeda learnt of the raid and was prepared, setting up defences for the arriving US and United Arab Emirates soldiers. The raid had earlier been delayed by Barack Obama, who was reportedly waiting for a moonless night, but was approved this week by Donald Trump. — New York Times

At top advisor to Iran’s Supreme Leader Ayatollah Ali Khamenei has hit back at US criticism of his country’s recent ballistic missile test, saying Iran does not need permission for such tests and that “… the American government will understand that threatening Iran is useless”. On Wednesday, Trump’s national security advisor Michael Flynn said Iran had been put “on notice” over the test. Iran insists the test does not violate the terms of its 2015 nuclear deal. — Reuters

Romania has been rocked by a second night of mass protests after the government passed a law decriminalising smaller acts of misconduct by government officials. The laws could directly benefit the leader of the ruling Social Democrat party, who is on trial for alleged abuses of power and is barred from parliament due to a previous electoral fraud conviction. The protests drew as many as 300,000 people, the larges since the fall of communism. — The Guardian

A clarifying moment in American history (The Atlantic): “It will get worse, as power intoxicates Trump and those around him. It will probably end in calamity — substantial domestic protest and violence, a breakdown of international economic relationships, the collapse of major alliances, or perhaps one or more new wars (even with China) on top of the ones we already have.”

Workless, or working less? (Inside Story): “If the on-demand version of the workless future is dystopian, what is the alternative? Dunlop puts forward two linked ideas: reductions in working hours and a universal basic income. “

Facebook and the press: The transfer of power (Columbia Journalism Review): “What comes next is highly significant for both platform companies and publishers. Can the new platform companies that publish and edit the public sphere remain politically neutral?”

Trump-bump subscription surge brightens otherwise grey results at New York Times (Poynter): “Cost-cutting in the face of the ad declines has been the norm in the industry. But not at the Times. Though there have been newsroom buyouts and layoffs, Thompson said that the newsroom budget for 2017 will increase by $5 million, mainly to support more investigative reporting.”

Liberal donor insists he has no influence on party policy (The Shovel): “A businessman who donated $1.75 million to the Liberal Party has dismissed concerns of undue influence, saying he has absolutely no say in the policy direction of the party.” 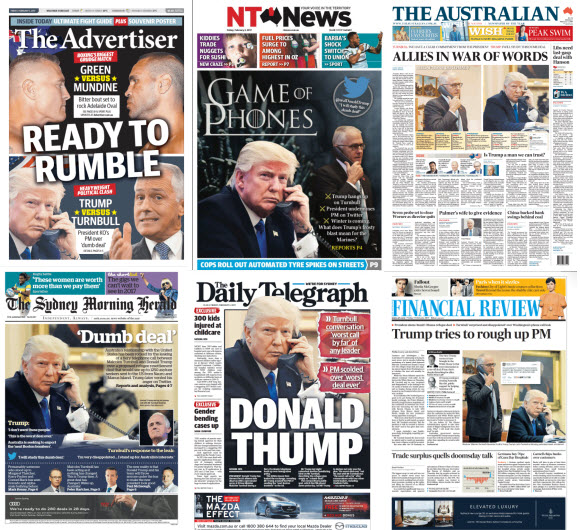