The big business sectors lifted their donation game in 2015-16 -- but we still know little about where a lot of political money is coming from.

Major industries — with some key exceptions — boosted their political donations in 2015-16, but with a more even spread between the parties after years of favouritism toward the Liberal Party, the 2015-16 donations data shows.

The finance sector reached a new donations peak of recent years and probably ever, handing over $1.8 million to both sides as the political battle over a banking royal commission and repeated banking scandals dominated the agenda. That compares with $1.77 million in 2014-15 and $1.6 million in the previous election year. Unlike 2014-15, however, when the Coalition did far better than Labor from the banks, insurance companies and other financial institutions, this time the cash was more evenly spread, $974,000 to the Coalition and $838,000 to Labor. Macquarie Bank was by far the biggest donor, handing $215,000 to the Coalition and $122,000 to Labor; second was ANZ, which gave $100,000 to both sides. 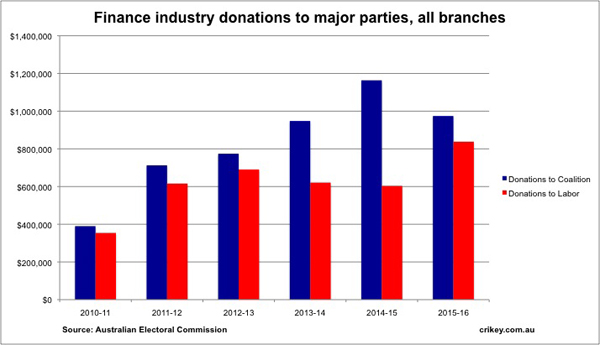 After virtually vanishing altogether as donors in 2014-15, as the industry was hammered by plummeting commodity prices, mining companies made a return to the lists in 2015-16, although the sector was dominated by a massive $400,000 donation from Aus Gold Mining to the federal and South Australian Liberal parties.

The hospitality and clubs sector, which donates more than other sectors to the parties’ state divisions than others, was particularly generous to the Coalition, which reaped nearly $645,000 compared to $321,000 to Labor branches. The $960,000 total spend for the sector, however, is well down on 2013-14, when it gave more than $1.3 million to the parties. 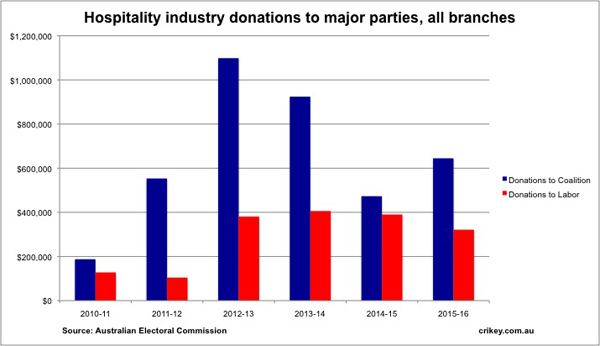 The health industry lifted its spending for the election year, although the death of Paul Ramsay in 2014 removed a source of massive donations for the Coalition; they garnered $447,000 compared to Labor’s $269,000. The Coalition’s haul was just under twice as much as in 2013-14, but Labor fared much better, pulling five times as much.

But while we have a good understanding of how much certain industries gave the parties, what we don’t fully under stand is where the parties gained substantial amounts of funding. The picture is clearer for the federal branches: of the approximately $15 million in receipts for the federal Labor Party in 2015-16, we know donations, other receipts and financial transactions identified in its AEC return account for $11.5 million, or around 77%. Similarly, we know the source of around 75% of the federal Liberals’ $14.8 million in receipts. But the Liberal Nationals in Queensland had $13.8 million in receipts but only account for $3.8 million in their return, or just over a quarter. The Victorian Labor Party only explains around 34% of its $8.3 million, despite reporting all donations over $1000. The WA Liberals are worst of all — they only provide details of less than a quarter of their receipts.

And that’s glossing over the fact that even for the federal divisions, where we know the source of the bulk of their receipts, many of the identified sources are what UNSW academic Lindy Edwards calls “shell organisations” — outfits like the so-called “Free Enterprise Foundation”, the purpose of which is to hide the identity of donors, including illegal donors (after all the publicity about it, the FEF had minimal activity in 2015-16, at least according to its return).

There’s no guarantee that we’ll have any greater transparency any time after Malcolm Turnbull’s pathetic statements on political donations reform yesterday. If Turnbull — or anyone else — seriously needs a parliamentary inquiry in order to accept that the current analog-era system badly needs fixing via much more rapid (preferably real-time) reporting, lower reporting thresholds, an end to the ability to split big donations across divisions, much stronger penalties for people (like Bill Shorten) who break the reporting rules and an end to fictions like distinguishing between buying a spot at a fundraising dinner and a donation, then they’re being wilfully obtuse. And Turnbull himself says he opposes foreign donations — which Labor has repeatedly sought to ban — as do many of his colleagues.

Instead, we got the same wishy-washy “let’s wait for an inquiry” garbage as always. Voters — who via their taxes are the biggest donors of all to political parties — are again being treated with contempt.