Did Turnbull's private chat with Trump convince him to exempt Australian dual national citizens from the visa ban? "Senator" Culleton returns to Canberra.

Did Turnbull really win an exemption? This morning Malcolm Turnbull announced that Australian dual nationals would not be subject to Donald Trump’s Muslim ban, saying that the White House had told our Washington embassy overnight that the UK and Canada would be afforded the same treatment. There’s an interesting story in the Financial Times overnight about the kerfuffle yesterday after British Foreign Secretary Boris Johnson claimed that he had secured an exemption for the Brits (despite attacking the ban) and then seemed to be contradicted by the US embassy in the UK.

According to the FT: “After the stand-off with the US embassy, Mr Johnson said the exemption would be more limited; British officials said Canada, Australia and New Zealand have received similar carve-outs.”

Which raises the question — did Julie Bishop’s department, and Joe Hockey, actually do anything to secure an exemption for Australian dual nationals, or was it handed out as a block exemption to the Five Eyes nations instead? Or even, did the efforts of the Brits prompt the Trump administration — which so far has displayed a remarkable cluelessness about thinking policy through — to realise that they had to hand out a similar exemption to all the Five Eyes countries or risk security co-operation? One thing is certain though — the Brits, the Canadians and the Kiwis all criticised the ban, at the prime ministerial level, and still have an exemption. Turnbull has stayed silent and his ministers have supported the ban. Any suggestion his silence was important for securing an exemption for Australians is therefore rubbish.

‘Senator’ Culleton returns. Arriving at Canberra Airport this morning before a day in the High Court, former One Nation senator Rod Culleton insists he is still very much a senator (and his chief of staff chided journalists who called him “Mr Culleton” and insists he will be taking his seat in the Senate when Parliament resumes on Tuesday because, as he put it, “it’s like baking a cake: you need all the ingredients in the Senate for a good outcome.”

Parliament security may have a different idea. When asked why the Parliament website now lists him as a former senator, Culleton said “they can say what they like, no one is above the law.” When questioned whether taxpayers were picking up the bill for Culleton to fly from Western Australia to Canberra for the former senator to continue his legal battle, Culleton wouldn’t say. The fact that he took a taxi, rather than a comcar, from the airport to the High Court probably gives some indication on that front.

Culleton insists he will be returning to his parliamentary office later today, but as Ms Tips previously reported, Culleton’s staff were forced to clear out his former office on Australia Day, and his name plate was removed last week.

Don’t mention the eugenics. After a lengthy campaign from the student newspaper Farrago and from The Age, the University of Melbourne late last year quietly renamed its school of mathematics and statistics building from the Richard Berry building to the Peter Hall building, after the former president of the Australian Mathematical Society and secretary for Physical Sciences at the Australian Academy of Science. What they didn’t mention is why the building’s name needed to be changed at all. As Farrago reported in 2013, Berry was researching eugenics in the lead-up to World War II, and had a creepy fascination with skulls. 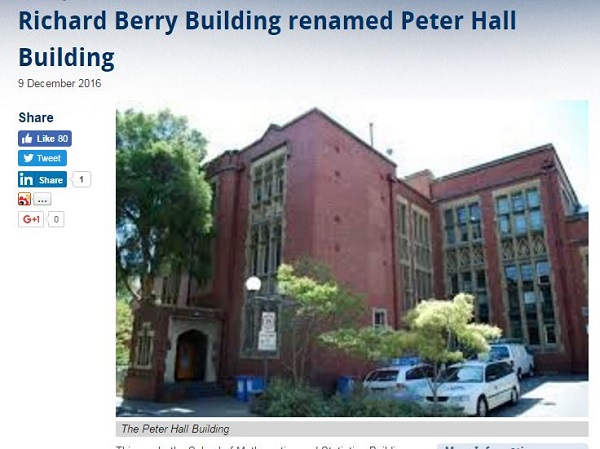 Polls, polls, polls. Stop the presses! The Australian has found one poll that suggests 48% of Australians want “insult and offend” removed from section 18C of the Racial Discrimination Act. Change the law immediately!

The IPA-commissioned Galaxy Poll paints a somewhat different picture of Australians’ views on the issue. A majority of Australians (52%) either disagree with changing the law, or don’t have a view on it. The actual question asked by Galaxy was:

A total of 48% of the 1000 respondents to Galaxy’s phone calls said they either approved or strongly approved of the change, while 36% said they either disapproved or strongly disapproved of the change, and 18% said they didn’t know. Those for the change were up on 2 points on the last time it was asked. Still, the vast majority (95%) said they thought free speech is important to them. It’s a pity the parliamentary inquiry is not concerned with other free speech issues like defamation law, or offensive language offences, or the Border Force Act.

If, as The Australian has previously demanded, we have a plebiscite on something Australians are consistently in favour of (over 60%), then perhaps a plebiscite on 18C is the way forward. The committee is already likely to be divided on its views. Liberal chair Ian Goodenough has suggested the law needs to be changed, while Labor deputy chair Graham Perrett put out a press release yesterday saying any changes would have dangerous consequences.