Shetler has a change of heart

Shetler said he left the Digital Transformation Office over a disagreement about the office's direction. Funny that ...

The media at large continues to go to former Digital Transformation Office CEO Paul Shetler as an expert on all things government IT, despite Crikey’s reporting on the tumultuous time for the agency under Shetler’s helm. On the weekend the AFR wined and dined the former exec and Trump fan at the luxurious Cafe Sydney. Over a $300 meal, he told the journalist — who dutifully repeated it — that his reason for departing office was over a “disagreement” with where the agency was heading under new minister Angus Taylor.

Curiously in October last year, Shetler took credit for this change (when he was moved sideways from CEO to chief digital officer). 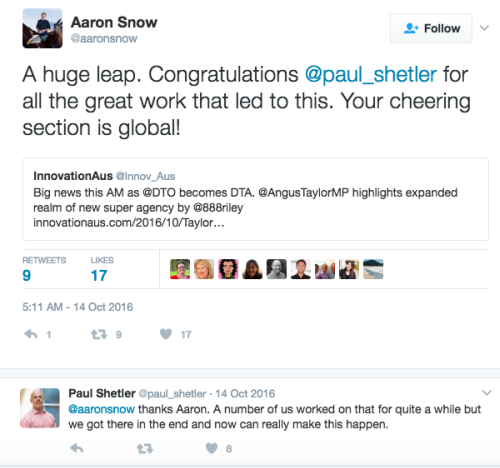 He quit under two months after this tweet. Taylor hasn’t refuted any of Shetler’s claims about the disagreement, but some within government have expressed concern about the narrative being put out about the direction of the digital transformation agency.

Why did Turnbull’s handpicked digital man resign so soon?