Good morning, early birds. Chaos in the United States as Donald Trump bans all refugees and migrants from seven "Muslim" countries, and the Australian Open is over for another year after two epic clashes of titans. It's the news you need to know, with Cassidy Knowlton and Max Chalmers.

EVERYTHING YOU NEED TO KNOW ABOUT TRUMP’S MUSLIM BAN

On Friday afternoon at 4.42pm, US President Donald Trump signed an executive order that he said would pave the way for “extreme vetting” to “keep out radical Islamic terrorists”. The order prevents any refugees from entering the US during the next 120 days, and it cuts the US’ annual refugee intake in half, to just 50,000 for a country of almost 320 million. This is followed by a direction to prioritise “minority” religious groups when the intake recommences, which appears to be a subtle religious test to help keep Muslims out. On Friday, Trump told the Christian Broadcasting Network that it had been easy for Muslims to enter the US as refugees while it was “almost impossible” for Christians. In fact, the US took an almost identical number of Christian and Muslim refugees in 2016.

The order also bars entry to any national from one of seven majority Muslim countries: Iran, Iraq, Syria, Sudan, Somalia, Libya and Yemen. This applies to all non-US citizens. The Department of Homeland Security initially confirmed the measures would apply to 500,000 green card holders from these nations, some of whom were out of the country when the executive order was signed, but the White House later told Reuters people in this situation could return to the US after an additional screening.

As the order came into effect, scores of people with legal visas were detained at US airports, while thousands of protesters flocked to airports around the country. Those who had been in the air when the order was issued were told they would be deported, despite holding legal visas for the United States. Taxi drivers at JFK airport went on strike. 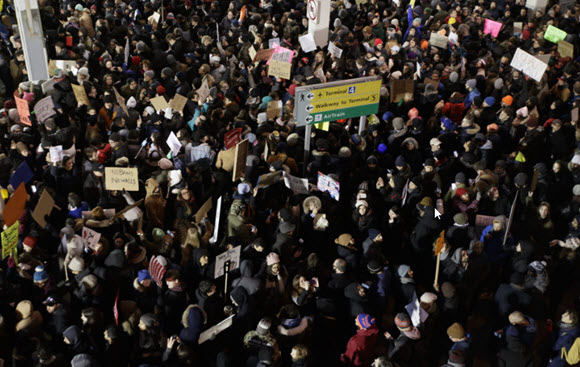 On Saturday night US time, a federal judge forced the government to hold off on deportations so that a case brought by the American Civil Liberties Union could be heard. This should stop deportations for now but will not allow people to get on flights and may leave many held in detention.

Meanwhile, in a 25-minute phone conversation with Malcolm Turnbull on Saturday, Trump said he would honour former US president Barack Obama‘s deal to permanently resettle refugees from Manus Island and Nauru in the United States.

Roger Federer beat longtime rival and friend Rafael Nadal in five sets last night to win the Australian Open, his 18th Grand Slam title. This is Federer’s fifth Australian Open and first since 2010. “I don’t think either of us believed that we were going to be in the finals of Australia when we saw each other at your academy five months ago,” Federer said. “I’m happy for you. I would have been happy to lose tonight, to be honest. The comeback was perfect, as it was. Tennis is a tough sport. There are no draws, but if there was, I would have been happy to have one tonight and share it with Rafa, really.”

In other tennis fairy tales, new world tennis No. 1 Serena Williams defeated her sister, Venus, to win her 23rd major singles title and seventh Australian Open. And Venus was full of praise for her sister: “I really enjoy seeing the name ‘Williams’ on the trophy. This is a beautiful thing,” Are they the greatest sporting story ever? “I don’t think we’re going for the greatest story in sports. We’re just going for some dreams,” said Venus. “In the case that we are, what an honour. What an honour.”

Los Angeles: The Screen Actors Guild Awards on Sunday night at 5pm California time (noon on Monday AEDT). Nicole Kidman is up for an award for her work in the Australian film Lion.

Adelaide: The South Australian cabinet will hold a roundtable with stakeholders to discuss establishing medical cannabis and industrial hemp industries in the state.

Sydney: Gladys Berejiklian‘s new cabinet will be sworn in. She has dropped some longtime frontbenchers, such as Adrian Piccoli, who will be replaced in the Education portfolio with Rob Stokes. Brad Hazzard has been moved to Health, following Jillian Skinner‘s resignation from Parliament on Friday. Skinner had been under enormous pressure to go after several fatal hospital errors under her watch. Skinner’s resignation will trigger a byelection for her seat of North Shore. Berejikliean has elevated two western Sydney MPs, Tanya Davies and Ray Williams, to the frontbench to try to shore up the Liberals’ electoral chances in the area at the next election.

Hobart: Federal assistant health minister David Gillespie will make an announcement on GP training at 9.30am as part of the government’s National Health Workforce Reform.

Washminster system is the worst of both worlds — Tony Abbott (The Australian $): “The [Howard government review of the Australia’s voting system] recommended changing section 57 of the constitution to allow legislation that’s been rejected twice in the Senate three months apart to go to a joint sitting without the need for a double dissolution election … The government should consider taking this reform to the people simultaneously with the next election.”

Malcolm Turnbull needs to study Donald Trump and learn from his actions — Andrew Bolt (Herald Sun $): “Turnbull is flat-footed, and no one has exposed that so brutally as Trump. Did Turnbull watch TV last weekend? If he didn’t tune in and learn, his last hope is gone.”

Get over it Bob, the debate on the Greens future is happening. Maybe change Hall Greenland (The Age) — “Anyone harbouring illusions that a de-radicalised (or de-Rhiannonised) Greens will form a government any time soon and change the world via parliament need look no further than Germany. ”

US forces are believed to have killed 41 al-Qaeda militants and 16 civilians during a raid in Yemen. The attack involved Apache helicopters and left one US soldier dead. Al-Qaeda has been able to take a foothold in Yemen thanks to a civil war between the Saudi-backed government and the Shia Houthi rebels. The US attack appears to be be the first of its kinds since Donald Trump was sworn in as President. — BBC

A prominent Muslim lawyer and adviser to Aung San Suu Kyi has been shot dead at Rangoon airport in an apparent assassination. Ko Ni had just returned from a trip to Muslim-majority Indonesia with members of Myanmar’s government and a number of other Muslim leaders. Two others were injured during the shooting, which comes at a time of heightened religious and ethnic tensions in the Buddhist majority country. — Reuters

Theresa May has been criticised for agreeing to a 100 million pound fighter jet deal with Turkey. Turkey’s Prime Minister Recep Tayyip Erdogan has imprisoned thousands of political dissidents in recent months and cracked down on the press. Downing Street said there was no contradiction between having concerns over Turkey’s human rights records and selling it the jets. — The Guardian

Mikhail Gorbachev: ‘It All Looks as if the World Is Preparing for War’ (Time): “More troops, tanks and armored personnel carriers are being brought to Europe. NATO and Russian forces and weapons that used to be deployed at a distance are now placed closer to each other, as if to shoot point-blank.”

The numbers are in: fake news didn’t work (Bloomberg): “Not only did the average American remember no more than one fake story, but even smaller fractions of them actually believed it.”

West Africa — from dictators’ club to upholder of democracy (BBC): “During the 1970s, 80s and 90s, the west African part of the continent had a poor reputation. At one stage, only one country, Senegal, had not endured a military regime.”