Culleton packs up ... violently for Labor ... cleanout at Aunty ...

Culleton’s office packs up. In what would have otherwise been a relatively quiet day in the halls of Parliament after the Australian of the Year event the day before,”Senator” (as he calls himself, scare quotes included) Rod Culleton had his staff in Parliament House on Australia Day packing up and moving his stuff out. The name plate was removed from his office recently by Department of Parliamentary Services, and Culleton was told by DPS this week — while he fights against his bankruptcy declaration and thus his ability to stay in the Senate — that he had to clear his stuff out by yesterday or they’d chuck it out for him. It’s not clear what the rush is, given Culleton’s replacement has yet to be confirmed.

UFC fighters for Labor. “Mark is my bro,” UFC fighter Soa Palelei says in a Twitter ad endorsing WA Labor leader Mark McGowan in the upcoming state election. Politics might be a blood sport, but Palelei’s support for Labor is due to the current state Coalition government banning fight cages and preventing UFC events happening in the state. Labor last year pledged to reverse the ban, so now they’ve got the backing of UFC fighters. 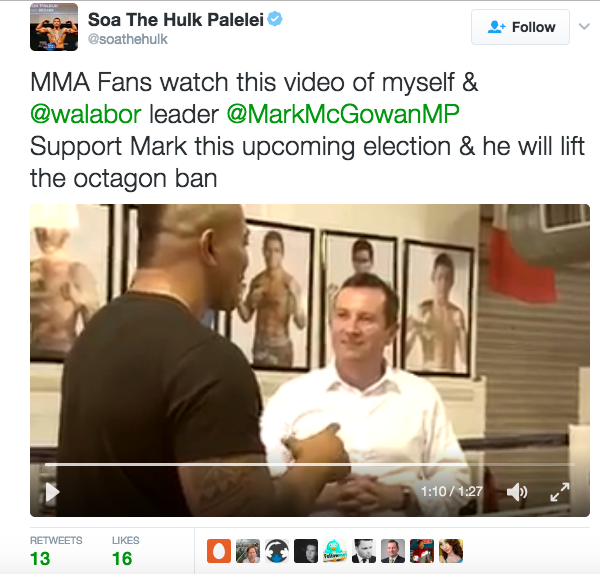 Aston’s latest jaunt. While we have enjoyed AFR Rear Window columnist Joe Aston’s takedowns of Miranda Devine over a perceived beef Devine has with Qantas CEO Alan Joyce due to his public advocacy for same-sex marriage, Aston’s lengthy feature on the airline in the AFR Magazine this weekend isn’t exactly going to shake up Devine’s suggestions that Aston is defending Qantas for a reason.

It appears, at least judging by the profile, that Aston was flown, on Qantas’ dime, to Japan for the purpose of seeing the new plates on which the airline will serve food. The full disclosure, including that Aston used to work for Qantas, is in there, but the next time Aston steps up to defend Joyce from another Devine attack (and we are sure one is not far away) she’ll have some decent ammunition.

Execs on the out at Aunty. One senior executive departing doesn’t raise eyebrows, two in a week though is a clean-out, and although the departure of the ABC chief operating officer David Pendleton has been mooted for several months, the timing of his departure, coming a week after that of head of ABC TV Richard Finlayson, looks like Michelle Guthrie is clearing the decks on the executive floors of the ABC. The broadcaster said Pendleton had notified the ABC “that after 20 rewarding years he will bring his career at the national broadcaster to a close”. In a curiously worded statement, the ABC said it “acknowledges the pivotal role Mr Pendleton has played in shaping the ABC’s operational base and in its digital expansion”.

“He has provided outstanding service to a succession of ABC Boards and Managing Directors and his operational knowledge and financial expertise will be sorely missed. His input, guidance and leadership have been invaluable in managing one of the most complex media organisations in the country.”

Gurthrie and the ABC board (and the Turnbull government) have three positions at least to fill — the impending vacancy in the chairman’s role when Jim Spigelman departs and the roles of head of ABC TV (which will be replaced with a head of content) and the chief operating officer’s role. Who will be next?

Salt of the earth. In the roll call of Australians getting Australia Day honours, in addition to Julia Gillard beating Kevin Rudd to the top gong, it was interesting to see swimmer Mack Horton get one. We assume it was in compensation for all the social media hate he received from China. Plus Bernard Salt got one for services to smashed avocado.