How the Herald Sun declared war on Melbourne’s homeless

It ramped up in that slow news time between Christmas and New Year. Melbourne sweltered through a series of hot days. The cricket was on, the tennis about to start. But for the journalists of the Herald Sun there was one story so pressing it had to be written again and again: homeless people were taking over Melbourne and ruining the festive season for everyone. The News Corp team crossed the river from Southbank and got to work.

There was a certain narrative as to how the story developed. First the paper reported that the homelessness crisis was out of hand, a blight on the city and that the Melbourne City Council had failed and was weak on the issue.

What followed was a campaign to demonise the homeless. Firstly features were run along with interviews and photos that took the approach that the people outside Flinders Street Station were not real homeless people but opportunistic backpackers or travelers from interstate camping out on Melbourne streets to save money.

Claims were made that some of these so-called “homeless” were making $500 dollars a day begging. The paper said the high visibility of where they slept was designed take advantage of the best begging positions to trap the unsuspecting tourists in town for the cricket and tennis.

Then the drug use was played up. “Shocking” pictures revealed homeless people smoking bongs and drinking. The interviews focused on the money they made begging to spend on drugs and alcohol. Evidence was produced in the form of Salvation Army Major Brendan Nottle saying half the homeless were not really homeless, but people who came into town just to beg, take drugs, and hang out.

The comments sections of these articles went wild. They repeated over and over the homeless should be evicted, locked up or hosed down with high-pressure fire-fighting equipment to get rid of them. 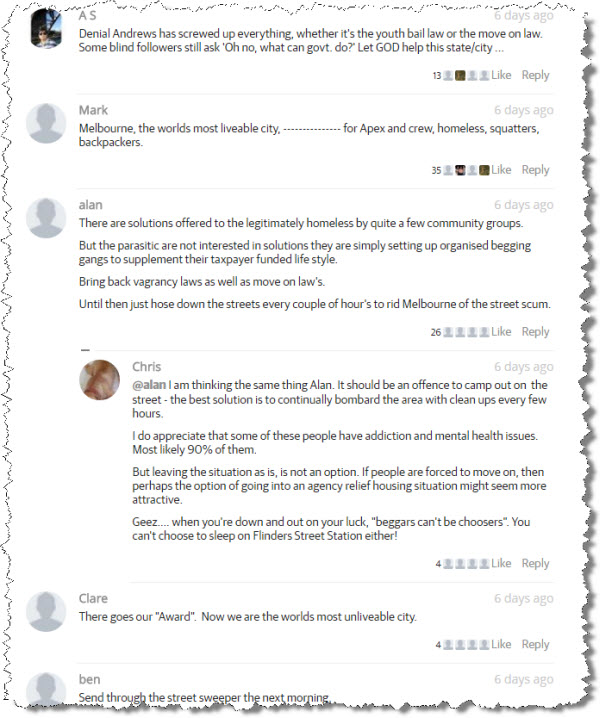 To be fair the Herald Sun did run one piece that detailed the writer’s experiences spending three days and nights on the streets of Melbourne with no money. The journalist was also identified as a “former drug addict”, just so readers would know where he was coming from. He concluded that the people on the streets of Melbourne had nowhere to go and that support services were inadequate.

But the respite didn’t last long. Columnist Rita Panahi penned a piece comparing the homeless people at Flinders street station to a “cesspit” and worse than a New Delhi Slum.

If you have ever been to New Delhi slum, this is a bit of a long bow to stretch, given there are millions of impoverished people in Delhi slums compared to, as the Herald Sun reported today, between eight and 15 outside Flinders Street station.

The campaign though was having an effect. Melbourne Lord Mayor Robert Doyle appeared to cave in on his previous stance that it was not illegal to be homeless in Melbourne. First he authorised the cleanout of homeless people along the Yarra River (where the Herald Sun had breathlessly reported homeless people with tents and a portable gas stove). But this move only led to more people going to Flinders Street, where the real media circus began.

Other outlets started covering the situation, and then it became ideological. Both Seven and Sky News looped footage of a buff, deaf former boxer and a homeless woman yelling at TV journalists to leave them alone. The Herald Sun of course dispatched journalists to record the minutia of the daily life of the small group of homeless people who remained.

Meanwhile the Lord Mayor  called a meeting of homeless support groups and hardened his rhetoric on the so-called “crisis”. The ABC chimed in subtly by re-running a very interesting BBC feature on News Radio that covered the solution to homelessness in US and Canadian cities by giving them homes.

An editorial in The Age on Tuesday this week pretty much tried to say enough is enough:

It is disingenuous and lightweight to righteously rant about symptoms, rather than do the hard work that goes with solving problems by redressing actual causes. But such is the pathetic populism emanating from some ideological media outlets and some community leaders in response to the increasingly evident problem of homelessness in Melbourne.

The editorial concluded, in a clear swipe at the Herald Sun:

“Blaming victims — that resort of scoundrels and charlatans — is ignorant and absurd.”

With the battle lines drawn, how did the Herald Sun respond? “A day at the Flinders street homeless camp”.  Photos show a man drinking out of a paper bag at 9am. Then the same man having a bong. A man with an open can of bourbon and Coke is taken away by police after they throw the can in the bin. The climax of the story is that same man returning from the police station in “little more than two hours”. He opens another can of bourbon and promptly has a nap on the pavement without touching the bourbon. The article details how the number of people at the station has “doubled” from eight to 15 in the past week. And the comments? Hose them down, clear them out, make them work, don’t give them support, dregs, bludgers, scavengers, criminals, the usual stuff. Meanwhile Doyle is reported to be suggesting new bylaws to increase the powers for police to move on people sleeping on the street in Melbourne. His position has hardened in the face of the relentless tabloid coverage. But as The Age pointed out in headline last week, “Homeless in Melbourne: Where, pray tell lord mayor, do you suggest they go?“

I’ve just had a vision of Rita Panahi and Robert Doyle, going on an “all expenses NOT paid” tour of Delhi slums, to investigate how to deal with homelessness.
*Sigh. A person can dream.

Yes, the only reason people are homeless are to inconvenience me…

The way the Herald Sun is going after the people in our society that are the worst off really makes me question their values.

Luke 18:11
The Pharisee, standing by himself, prayed thus: ‘God, I thank you that I am not like other men…

How nice and ever so charitably Christian of the Salvos to be laying the boot in. They were the foot soldiers in the Rodent’s war on drugs and we saw how well that went. Long term and strident defenders of pedophiles within the ranks as well.
I wouldn’t piss on their collection boxes if they were on fire.

Don’t forget their recent comments on the Safe Schools program too. The Salvos have become the charity organisation that is really impossible to support now. Pity too because they used to do some good work.

And then there’s their job seeker services. Been a long while since the Salvo’s were charitable: they’re just another non-profit corporation, now.

Perhaps the Thatcher solution for rough sleepers in 80s London – gifting (!) them specially designed cardboard boxes for nighty-night.
Sydney tried handing out pup tents at Belmore Park (by Central) a couple of years ago but succumbed to rants from the usual suspects at Hate Central, 2GB,last year and sent in the heavies.
Now the squeaky clean (?), new – only slightly shop soiled – NSW Premier sez her mission will be to make housing more affordable. Yay team!