Could the importance of our diplomatic relationship with Malaysia be taking precedence over the principles of criminal justice? Freelance journalist Jarni Blakkarly reports.

The scandal surrounding Malaysian sovereign wealth fund 1MDB is deepening, with major investigations underway in at least four countries, bankers being jailed and more than $1 billion in dodgy assets being seized. Yet the Australian Federal Police have barely made a whimper.

The 1MDB scandal made headlines in July 2015, when The Wall Street Journal reported that US$700 million, alleged to have been siphoned from the government wealth fund, had been deposited into the personal account of Malaysian Prime Minister Najib Razak.

Najib denied any wrongdoing and claimed the money was a “political donation” from an unnamed source.

Malaysia’s Attorney-General began investigating the scandal, but he was abruptly sacked in the middle of the investigation, and the Deputy Public Prosecutor’s body turned up inside a barrel at the bottom of a swamp. The replacement AG cleared Najib of any wrongdoing last year.

However, international law-enforcement agencies have turned up more in their investigations.

In July last year, the United States Justice Department’s Kleptocracy Asset Recovery Initiative made its largest ever seizure of US$1 billion in assets belonging to close allies of Najib, which the initiative believed were siphoned from the fund.

Yachts, luxury apartments, a painting by Vincent van Gogh and rights to the Oscar-nominated The Wolf Of Wall Street film, starring Leonardo DiCaprio, were among the seized assets (Najib’s son-in-law Riza Aziz produced The Wolf of Wall Street and was at the centre of the raids).

Authorities in tax havens Switzerland, Luxembourg and Singapore are also investigating the role financial institutions in their countries had in siphoning and laundering the Malaysia state funds.

On Wednesday a third banker in Singapore was jailed on money-laundering and fraud charges relating to the scandal. Singapore sent Swiss national Jens Fred Sturzenegger to jail for seven months, and two Singaporean nationals have also been jailed in recent months on similar charges.

Yet while other countries have opened investigations, University of Tasmania expert on south-east Asia’s governance issues, professor James Chin, told Crikey that Australia had “sat on it” largely due to strategic and diplomatic concerns.

“Australia has always been very careful about its relations in south-east Asia … the unofficial policy is not to embarrass other countries in the region,” Chin said, citing previous examples of inaction from the authorities on dirty Papua New Guinean money flowing into Australia.

“1MDB money was laundered all around the world. It is very likely that some of the money passed through Australia. It is also likely some of the money went to property investment in Australia, so Australia can’t completely stay clear,” Chin said.

Two weeks ago the AFP said they were assisting with international investigation, but made no reference to any investigations of their own.

“The AFP is aware of allegations relating to companies associated with 1MDB and have assisted our foreign law enforcement partners with their investigations in relation to a number of these matters,” the AFP said in a statement.

And there is no shortage of Australian connections to the scandal.

ANZ bank has three permanent board seats and a 25% shareholding in AmBank, the Malaysian bank at the centre of the money laundering allegations. ANZ deputy chief executive Graham Hodges was briefly questioned about 1MDB during an unrelated Senate hearing in April, and he denied the bank had any guilt by association.

On Friday, The Guardian Australia reported that one of the Singaporean bankers accused of having been involved in money laundering had made big property purchases on the Gold Coast.

Chin noted that this wasn’t the first time Australian authorities had hesitated to get involved in criminal investigations with potentially damaging consequences for regional relationships.

He cited the Reserve Bank of Australia’s note-printing scandal and the refusal to investigate Taib Mahmud, the governor of the Malaysian state of Sarawak, who owns vast holdings in Australian companies and real estate, including the Adelaide Hilton hotel.

Malaysia is Australia’s eighth-largest trading partner and a major source of international students for the booming higher education export industry.

There are also strategic concerns. Since the US Department of Justice raids against Najib’s associates and family in the US, Malaysia has taken a sharp turn towards China.

Najib saw the raids as an attempt by the US to undermine his leadership within Malaysia’s ruling party. The US action also stemmed the flow of Western foreign direct investment into Malaysia.

In November, Najib went to China, cap in hand, and returned with $45 billion dollars worth of trade deals and much-needed investment in Malaysia. He also spoke of the want to increase military ties and made Malaysia’s first purchase of Chinese-made military hardware.

In the coming months, concrete will be poured for a massive Chinese-funded high-speed railway connecting Malaysia’s resource-rich east coast with its more developed west.

Malaysia has traditionally been a US ally, and Najib’s visit was likened to the dramatic China pivot of Philippines President Rodrigo Duterte, who declared his country’s “separation” from the US just a month earlier.

Australian National University Professor Anthony Milner told Crikey Australia had a long-running and independent military and diplomatic relationship with Malaysia and that it had been maintained despite the US falling-out.

“If Australia is going to deal with the region effectively we probably need to put aside the idea we are all going to have liberal values and deal with different regimes … the 1MBD scandal comes into that context,” Milner said.

Australia may well be working with Najib for some time to come. Despite the endless spate of scandals, Najib has proven to be a shrewd political operator, expelling enemies within his party and using a controversial religious bill to effectively divide the countries opposition.

He is expected to call snap polls later this year to take advantage of his strong political position and to secure another five years in the top job. 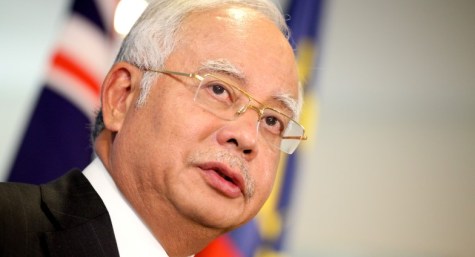 Thats easy, because Australia is as corrupt and any country in Asia. This Century is truly the death of any form of honesty amongst the wealthy, or should that be the wealthy have more control over profitable corruption.

“Economies of scale-backs”?
….. If this bloke had been a drug mule going to Indonesia with a couple of $thousand in contraband at stake ……?

The inaction of our Praetorian Guard (its sole function – protect the Nude Emperor) is less about diplomatic damage than the links within this country.
T/A scams by trough addicted pollies is one thing but the BigAr$e end of town is inviolable.