Are tickets to the Aus Open too expensive?

A Crikey tipster wonders if perhaps a bit of work needs to be done about ticket pricing to the Australian Open.

While Melburnians are trekking to the Australian Open in the thousands, a Crikey tipster wonders if perhaps a bit of work needs to be done in ticket pricing. These pictures were taken at Monday afternoon’s session, when eighth seed Dominic Thiem took on 11th seed David Goffin at Rod Laver Arena. Earlier in the session, Serena Williams had defeated Barbora Strycova. “If Tennis Australia were to reduce prices (around $300 for two seats) one assumes the stadium would have looked a lot more inviting for the world’s top players”. There were many empty seats on the top deck, and our tipster says it was only a little more well attended during Williams’ match. Of course it’s easier to argue tickets should be cheaper, but when there are so many spare seats it’s got a bit more merit than usual. 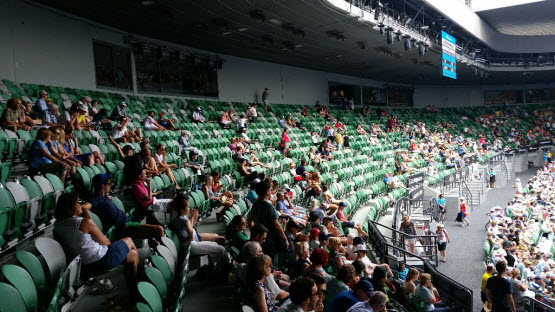