If you speak a foreign language and can create the world's best content in every medium, The New York Times might be the place for you. 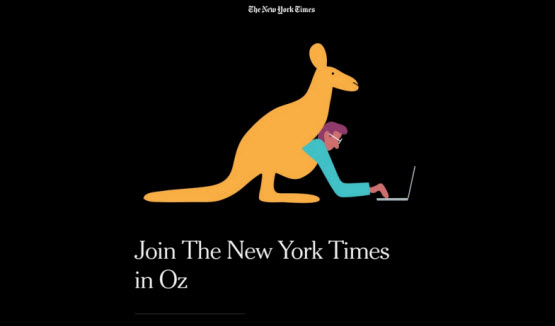 Who said there were no jobs in journalism these days? The New York Times, which likes to refer to itself as the newspaper of record, is still filling a few positions for its Sydney operation. They Grey Lady wants a graphics multimedia editor (who can see visual angles in all media and edit, write and dream up new possibilities) and a reporter (who can write and film stories that break news in all formats that “make people laugh, cry or protest”) to hold the powerful accountable. And you need fluency in a foreign language and social media skills for that one and social media skills. The Times also wants an audience growth editor and an editorial assistant, all based in Sydney.

They will report to newly announced bureau chief Damien Cave, who has been at the Times for more than 12 years.

But probably the most intriguing positions are for project collaborators. The paper has some suggestions for these:

“Is there a video series that could explain Australia to itself and the world, or a visual project that could work as food or culture criticism, or as an opinion essay? Is there a database you’ve always wanted to dig into for an investigative story? A series of illustrations or animated GIFs that could work well on social media and tell a story or explain an overlooked issue you’ve always wanted to explore? A 360 video or digital soundscape that would deepen engagement with a person or place, or an art project that’s journalistic and might also land in a museum?”

Oh and it has to be an executable idea. Should be a piece of cake.  — John Martinkus

Is that Chris Kenny in that Skippy suit?

“If you speak a foreign language …” indeed. That desiderata from the Grey Lady contained mostly recognisable english words but I could not understand what it was thought to be saying.