Don’t panic on metadata privacy. There was a bit of confusion last week when the full Federal Court dismissed an appeal by the Privacy Commissioner over former Fairfax journalist Ben Grubb’s metadata, gathered from his mobile phone (we covered the hearing here). Some had suggested that the decision had “gutted” the Privacy Act, or that metadata was now not considered personal information under the act.

The judgment was published on Austlii this week, and Anna Johnston from Salinger Privacy’s post on the matter gives a much clearer view of the judgment. Essentially the court wasn’t asked to decide whether mobile phone metadata was “about” Grubb or whether the information was personal information, but rather whether metadata was “about an individual” based on an old privacy principle that changed in 2014.

Guess who, don’t sue. A tipster tells us a former Liberal staffer in Sydney, now working in government relations firm, took the phrase “alternative facts” to a new level over the weekend. We hear the Trump supporter wanted people to know he would be in Washington DC for the inauguration ceremony, spreading the news on his Facebook page about getting an invite and heading over to the US. The problem is, he wasn’t there — he used Facebook’s check-in feature to make it look like he was in the US, when he was actually in Woollahra. But Facebook often automatically posts where people are posting their statuses from and gave the game away. Sounds like some alternative facts are needed.

The serenity of Frankston. Hear that? It’s the sound of silence. News Corp columnist Rita Panahi is usually quick to set the record straight, but she hasn’t tweeted anything about Bryce Corbett’s report in Rear Window this morning that Victorian Liberal Party president Michael Kroger had asked her to run for the party in the Victorian seat of Frankston. Panahi is from the area — a profile of her at SBS called her home on the Mornington Peninsula “more than handsome”, but the seat holds painful memories for the Libs. It was Frankston Liberal MP Geoff Shaw who left the party, creating havoc for then-premier Denis Napthine before losing government after just one term. Labor is already dealing with the Apex gang in Melbourne’s south-eastern suburbs, but now Panahi as well?

Enthusiast for all things. Former Australian Motoring Enthusiast Party candidate Robert Bryden has used his experience with the party in a long-winded and sprawling press release to spruik his credentials as a lawyer. “EVER THOUGHT YOU COULD DO A BETTER JOB THAN MOST POLITICIANS?  Me too …” Bryden opens, moving on to a whole story about the experience. This is the closest we got to working out how it was related to his business in compensation law:

“Formal sign off on the Candidates was given by the Party, the Australian Electoral Commission forms were completed on a State basis – which made a Passport application look like a rewards card at Domino’s pizza! Buy one, get free garlic bread, 10% off and how do you feel about diet coke? Will there be fries with that?

“In NSW we delivered them in person (no risks taken here, I am Robert Bryden of www.robertbrydenlawyers.com .au after all) and met with the very helpful AEC staff to go through the forms in detail as any slight error can result in the candidacy being rejected after nominations close.”

Beat a hasty retweet. One of the more spectacularly unsuccessful lobbying efforts of recent years has been the Business Council of Australia’s constant demand for tax cuts for its multinational members — many of whom pay far less tax already than smaller Aussie companies. So bad was the BCA’s “campaign” for tax cuts last year that it became a punching bag for its allies in the Liberal Party, with Victorian Liberal eminence grease Michael Kroger demanding the sacking of CEO Jennifer Westacott. So now the BCA has launched a new campaign for those tax cuts. What’s different? Have they actually found some evidence from anywhere on the planet that company tax cuts do anything other than pad corporate bottom lines and shareholder returns?

Heh — no fear. This campaign is based on … retweets. “Retweet to support the #EnterpriseTaxPlan” the BCA tweeted hopefully last night. As of writing, sadly, they only had 23 retweets. Then again, it’s surprising there are even 23 people prepared to support huge handouts to the world’s biggest companies. Who were they? Well, there’s Christine Jackman, who is “Director of Strategic Comms” at the BCA. And Jared Owens, another former Australian hack, who is a junior spinner for the BCA. There’s the official account of the NSW Liberal Democrats — nice to see someone in that party can tweet without making a joke about mass murder — far-right consultant Sinclair Davidson, Michael Potter of the IPA-wannabe think tank CIS, Sally Loane of the big bank front group FSC and a couple of erstwhile Liberal luminaries, Brian Loughnane and Ian Hanke. Sadly, Kroges isn’t on Twitter — or if he is, he never tweets — so he couldn’t lend his support to this brilliant new strategy. 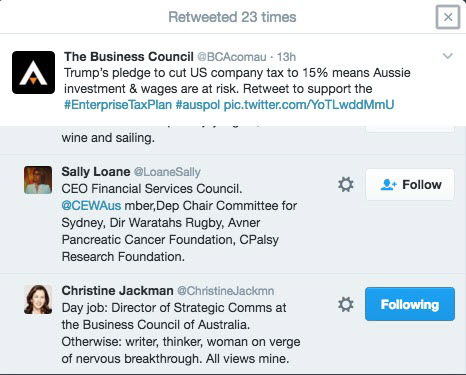 *Heard anything that might interest Crikey? Send your tips to boss@crikey.com.auor use ourguaranteed anonymous form

So now the BCA has launched a new campaign for tax cuts. What’s different? Some say they actually found some evidence that a company they lobby for pays some tax. It appears 600 companies do not pay any tax at all.

Hey, we have all that groundwork done for a plebiscite so how about one on banks & all corporate entities paying their tax?