One Nation rumour, please explain? They might be a party on the rise, but it’s a slur to suggest some people are considering running for them. In the Townsville Bulletin‘s version of Tips and Rumours on the weekend, the paper alleged that a local school teacher Margaret Moon, an administrator of a Facebook group, Water for Townsville Action Group, was considering running for Pauline Hanson’s One Nation for the upcoming Queensland state election. This led to Moon posting in the Facebook group on the weekend that it was a “scurrilous piece of gutter journalism” and false and slanderous, stating the paper never contacted her to confirm. The editor of the paper and the journalist who wrote the piece both jumped into the comments and apologised, with journalist Kieran Rooney stating in the comments that he had heard the rumours from three sources, and the piece was written to state the rumour was circulating around. In today’s Bulletin, the paper has apologised. 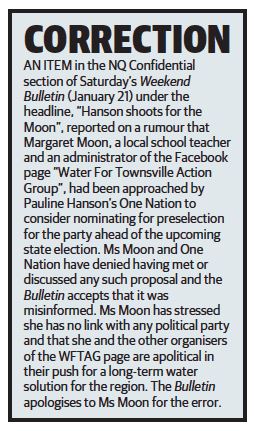 Get Fact. Counsel to US President Donald Trump Kellyanne Conway overnight said that White House Press Secretary Sean Spicer was just offering “alternative facts” about the size of the crowds at Donald Trump’s inauguration when he criticised media reporting that the crowds were much smaller for Trump than either of Barack Obama’s inaugurations.

“You’re saying it’s a falsehood, and Sean Spicer, our press secretary is giving alternative facts to that,” Conway said.

This has, naturally, led to much mocking online, but perhaps the best today comes from the always on-point Merriam-Webster dictionary Twitter account, which tweeted “A fact is a piece of information presented as having objective reality”. 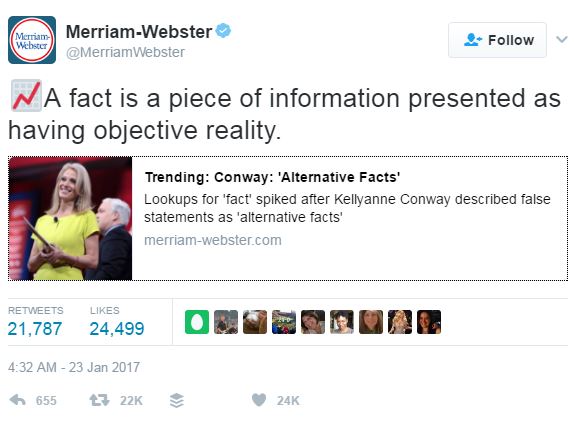 According to the site, there was a spike in searches for the definition of “fact” after Conway’s alternative facts claim. It’s going to be a long four years.

The Australian‘s Australian(s) of the Year. After devoting hundreds of thousands of words to 18C over the past few months, it is not surprising that the national broadsheet has awarded its own Australian of the Year — because the regular Australian of the Year awards are too PC, or something — to the lawyer and students involved in the QUT 18C case, Anthony Morris and Calum Thwaites respectively. In an editorial, the paper said in fighting the QUT case the five were protesting “their innocence and protect[ing] their freedom of speech”. Given the ongoing “culture wars” where Crikey readers overwhelmingly voted for Human Rights Commission president Gillian Triggs in last year’s Crikeys, it is not surprising that the Oz would go in the other direction. But it is interesting considering Morris and Thwaites demonstrated their commitment to free speech so lauded by The Australian by suing an elected member of Parliament for defamation and getting a five-figure sum settlement.

“While less murderous than the tactics deployed by Islamist terrorists, the actions taken by the AHRC were no less authoritarian and they sprang from the same impulse: to use whatever means they have at their disposal to silence those with whom they disagree. Section 18C of the Racial Discrimination Act was just the ticket. It provided them with the blunt and brutal weapon they were looking for.”

Murdoch at Malcolm’s. Guess who is town? Rupert Murdoch has landed in Australia with one of his first stops being drinks at Kirribilli House with the Prime Minister and other members of Australia’s media and business upper echelons. The media mogul was accompanied by his wife Jerry Hall and, like on their wedding day, Hall was wearing flat shoes — she’s slightly taller than her hubby. 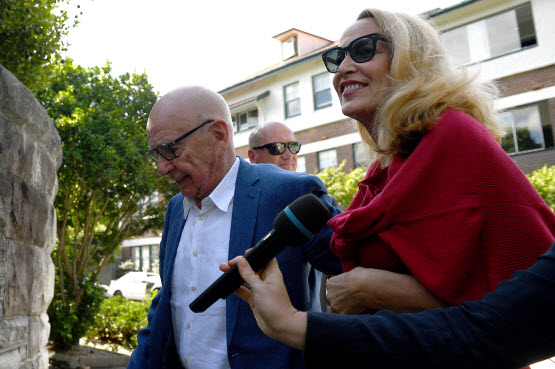 After Trump, is American democracy out of the woods?

“Counsel”? The implication being Conway’s a lawyer – while her name implies a certain way about her too?

And Alice arriving at that Tea Party – it was “BYO Hatter”?

Murdoch in town to praise Malcolm Chicken Little for the successful hatchet job he did on the almost unwatchable ABC and severely compromised NBN. Or is he in town to organise another tranche of corporate welfare for his forever challenged NewsCrap organisation?