Good morning, early birds. As Melbourne reels from the Bourke Street tragedy, the conversation turns to Victoria's bail laws, and the government starts to set its agenda for 2017. It's the news you need to know, by Sally Whyte and Max Chalmers.

WHAT WE KNOW SO FAR: THE BOURKE STREET TRAGEDY

The victims of the Bourke Street tragedy have been remembered by their families as the focus now turns to the failures of Victoria’s justice system, as questions are asked about the voluntary bail justices. The death toll from the incident on Friday afternoon, when a speeding car mowed down pedestrians in Melbourne’s busy shopping strip, has reached five, including a three-month-old baby.

Prime Minister Malcolm Turnbull, Premier Daniel Andrews, Melbourne Lord Mayor Robert Doyle and federal Labor leader Bill Shorten paid tribute to the victims at a memorial in Bourke Street Mall yesterday, as three of the victims were named as 33-year-old Matthew Si, 22 year-old Jess Mudie and 10-year-old Thalia Hakin. The baby and a 25-year-old man have not been publicly identified. There are fears the death toll will rise with more than 20 people still in hospital, six in a critical condition, The Age reports. 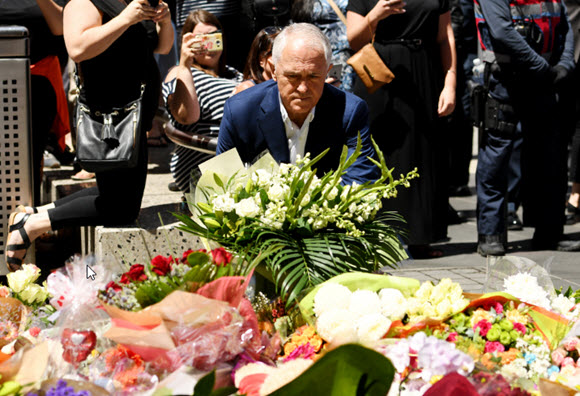 Victoria’s bail laws are under scrutiny after it was revealed the alleged driver Dimitrious “Jimmy” Gargasoulas was given bail only six days before Friday’s events, despite recommendations from police that he be denied release. Police chief commissioner Graham Ashton says it is likely Gargasoulas will face multiple murder charges.

The Herald Sun reports the Andrews government held an emergency cabinet meeting yesterday, and the Police Association wants major changes to the state’s bail laws, including banning those charged with violent offences such as armed robberies and serious assaults from applying, as well as scrapping the voluntary bail justice system.

Donald J Trump was sworn in as the 45th President of the United States on Friday, delivering a blistering address that called for unity through patriotism and promised to put “America first” and end the “American carnage”. “For too long, a small group in our nation’s capital has reaped the rewards of government while the people have borne the cost,” Trump told the crowd gathered at the National Mall. “Washington flourished, but the people did not share in its wealth. Politicians prospered, but the jobs left and the factories closed.” After taking office Trump signed an executive order scaling back Obamacare. The following day more than 1 million people turned out to women’s marches around the US and the world, protesting against Trump’s election in numbers that caught organisers off guard. In response, the President’s Press Secretary Sean Spicer read a statement from the White House press room insisting, without evidence, that Trump’s inauguration had been the most viewed ever. He lambasted the press for misrepresenting the turnout and refused to take questions.

SCOTT MORRISON IN THE UK

Treasurer Scott Morrison is in the United Kingdom this week, on a mission to lay the foundations for trade deals with post-Brexit Britain. Australian High Commissioner Alexander Downer told the BBC discussions had already been taking place at a ministerial level, even though nothing can be negotiated until the UK actually leaves the European Union, the Australian Financial Review reports. Morrison will also be taking notes on Britain’s Housing Finance Corporation, which issues loans to housing agencies in a bid to make housing more affordable. New Assistant Treasuer Michael Sukkar has told Fairfax housing affordability was “an extraordinarily high priority for the PM”.

“We’re reinvigorating the regions. The goal is to give them back the voice that’s been drowned out by the oversaturation of politicians in that south-east corner.” One Nation staffer James Ashby has told The Guardian, in an unusual long-form interview with an adviser, who still claims that he won’t be running for the party helmed by Pauline Hanson at the next Queensland election.

“We’re interested in going to this next election to win government, and Pauline’s made that very clear,” the former Liberal staffer said.

Melbourne: Government leaders and members of the public will gather at Federation Square this evening to pay tribute to the five people killed on Bourke Street on Friday.

Sydney: The NSW Liberal party will vote on new leaders to replace Premier Mike Baird after his shock resignation last week. It’s expected the vote will usher in Gladys Berejiklian as leader and Dominic Perrottet as her deputy. Berejiklian is set to announce a range of changes to cabinet, as well as a policy “reset” ahead of the 2019 election.

Melbourne: The High Court sitting as the Court of Disputed Returns will hear evidence on the validity of Family First Senator Bob Day‘s election to the Senate last year. This is the first of a two-day hearing in front of Justice Gordon before the full bench sits on the matter in February.

Melbourne: The Senate Committee into the government’s same-sex marriage plebiscite will hold its first public hearing today, with from the Law Council of Australia, the Australian Federation of Civil Celebrants and the Australian Marriage Forum, among others, set to appear. Fairfax reports the Law Council’s submission to the inquiry says the proposed version of the legislation goes too far in trying to appease religious groups. The full program is here.

Sydney: The Allan Border Medal will be awarded tonight, honouring the best Australian cricketers in the past year.

Melbourne: The second week of the Australian Open kicks off today, and Australian Daria Gavrilova is the only Aussie left in the singles draw, taking on fifth seed Karolina Pliskova at Rod Laver tonight. After the shock exits of Andy Murray and Angelique Kerber yesterday, today’s big names include Serena Williams and  Rafael Nadal.

Outgoing NSW Premier Mike Baird’s tax reform regret a warning for Turnbull — Elizabeth Proust (Australian Financial Review $): “The failure to prosecute successfully a national tax reform agenda within the federation was a major disappointment for the NSW Premier, not due to lack of desire or perhaps even fortitude on his part, but rather because the federal government failed to capitalise on a real opportunity to achieve real reform as part of a comprehensive reform to the nation’s taxes.”

Yahya Jammeh, Gambia’s President for the past 22 years, has fled the country. Senegalese forces entered the neighbouring West African nation last week after Jammeh refused to leave his post despite being defeated at a national election. Adama Barrow, who won the December poll, will now return to Gambia and take up the country’s leadership, vowing to establish a truth and reconciliation commission to investigate allegations of rights abuses during Jammeh’s time as President. — BBC

A train derailment has left at least 39 people dead in India. The incident occurred in the state of Andhra Pradesh in the country’s east, and authorities said they had not ruled out “foul play”. While Maoist rebels operate in the area, India also has a significant problem with rail infrastructure. The most recent major crash killed 150 people in Uttar Pradesh, while the country recorded over 27,500 railway deaths in 2014. — Reuters

Fears of a major tsunami have eased after a magnitude eight earthquake struck the Papua New Guinean island of Bougainville. Despite the quake’s strength, no injuries have been reported, and a warning that major waves could strike the region has been wound back. — Reuters

The government secrets Trump is about to discover (Politico): “While much attention has been focused on Trump’s access to the nuclear launch codes and the President’s Daily Brief — the classified intelligence report delivered inside a locked briefcase each morning to the Oval Office—those represent only a tiny sliver of the massive top-secret universe that Trump personally will suddenly be privy to.”

Do we want to live in china’s world? (China File) “The United States offers developing nations sermons on democracy; China builds their airports, harbors, and highways.”

Writing about climate change: my professional detachment has finally turned to panic (Guardian Australia): “While I can’t say with confidence that bringing a child into the world we are creating is the right thing to do, I maintain a hope that those children will find a way to undo what we have imposed on them.”

Re Jimmy G matter; So whilst some are shouting about how terrible bail laws are, perhaps it should be explored and explained the following. if police opposed bail…. how then did a bail justice grant bail .. the bail matter never came before the court so a court did not make this determination. it was always in the hands of police right up until the tradegy ..