What goes around comes around. The Herald Sun‘s campaign against the homeless people of Melbourne has been running for months, ramping up in the last few weeks as authorities have acted to try to move on people sleeping rough in camps outside Flinders Street Station. In the space of three days, Lord Mayor Robert Doyle has moved from saying he wouldn’t ship out homeless people, to proposing a ban on sleeping rough in the Melbourne CBD. Today, Herald Sun reporter Cassie Zervos tweeted a photo from outside the train station: “Heavy rain didn’t wash away the homeless camp at Flinders St … or their bongs”, the “general news reporter” wrote. 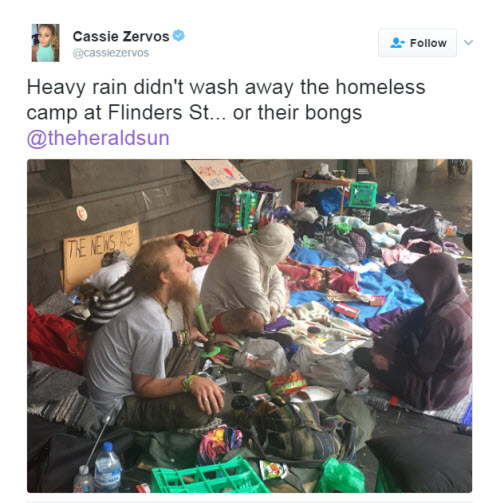 That’s the same Cassie Zervos who wrote for the Bayside Leader in 2015 that people shouldn’t judge her for living in the affluent suburb of Brighton:

“What my fellow students, teachers and society didn’t sum up in the five seconds of the first impression was how my family got to be where they are. How we came to live in Brighton.”

“It hurts when people want to stereotype us and jump to conclusions, ridiculing us for striving to be successful.

“I’m not saying everyone who lives in Brighton is like my family, but Bayside is made up of 100,000 different people, each with their own histories and dreams for the future.

“Society should not be so quick to judge.”

But does it work both ways?

Peak Canberra. Only in Canberra would a minister hold a ceremony about parking meters. Today Minister for Planning and Land Management Mick Gentleman will hold a “ceremonial event to mark the end of single-space parking meters in Canberra”. Not to be missed.

Invest now in other people’s misery. According to a US investment analyst, tonight’s inauguration of President-elect Donald Trump should be followed by a once-in-a-lifetime investment opportunity: privately owned jails.

According to Michael Kodesch at Canaccord Genuity Trump’s policies on immigration and crime could increase numbers in US federal prisons. The report in Marketwatch says:

“There were 189,316 federal inmates in US jails as of Thursday, with 12% of that population in privately managed facilities, according to the Bureau of Prisons. That’s down from a peak of 219,298 in 2013.

“‘As we approach Trump’s inauguration, we see low risk to contract renewals and the overall private prison business model, driving a compelling investment opportunity,’ Kodesch wrote in a note to clients. He said investor concerns about the drop in federal prison populations over the past few years may be overdone, as the recent slowing in the decline suggests the Fair Sentencing Act of 2010, which eliminated some minimum penalties for drug possession, is running its course.”

And you can bet not many of those new inmates will be brokers, analysts, insider traders, polluters or bankers, with the Trump gang promising to go soft on enforcing laws and regulations on business and finance.

Socrates faces his critics. The Australian carried an advertisement from the “Climate Study Group”, featuring an imagined conversation between Socrates and “a strong believer in Climate Change”. The group behind the ad has done similar things before, with adverts in the Oz in 2015. The DeSmogBlog team wrote at the time the group had seven members, including two ex-IPA directors. 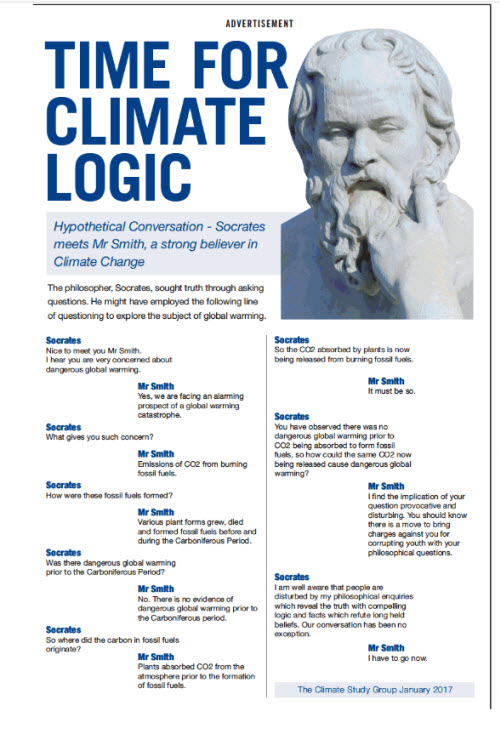 So ‘Mr Smith’ (or rather the Climate Study Group) hasn’t heard of the Palaeocene-Eocene Thermal Maximum, 55 mya, which was definitely after the Carboniferous and was 7 K warmer.

Oops, I misread the advert as ‘dangerous global warming after the Carboniferous’.

‘Dangerous’ is relative to the species living at the time. The history of the Earth is periodic extinctions, of greater or lesser extent, due to climate change, some cooling and some warming. The species going extinct at the periodic extinctions due to global warming before the Carboniferous would have regarded it as dangerous.

Socrates was indeed charged with corrupting youth. However, it may be some time before such climate denial becomes criminalised like holocaust denial is in Europe. It might be more effective to track down and expose the channeling of funding to pro-carbon groups like this one. Go Crikey!

Where did they get that load of crock from? The temperature before, and during the early part of the carboniferous era was “dangerously” high, about 7 – 10 degrees warmer (on average) than today.

the issue with burning fossil fuels, instead of using the rare hydrocarbon materials as chemical feedstocks, is the sudden release of gases which were stored over several millions of years. ‘we’ have released millions of years of storage in less than two hundred.
Where is the logic in that?
More logic required to justify the inordinate spending on industries which need huge and ongoing state subsidies as well as consumer subsidies..
The minor details of fact are already well established..let the quibblers deal with that elsewhere rather than taking over this thread as well.. the trends are clear.

Good on ya Cass. You could probably live like they’re redudced too, without some sort of “escapism”.