Ley’s diary going, going, gone. The Department of Health has said it can no longer access former health minister Sussan Ley’s diary since her resignation.

When Ley stood aside last week pending an investigation into her expenses, she told reporters that she would be making her diary available as part of PM&C secretary Martin Parkinson’s investigation into her expenses claims, in particular around her trips to the Gold Coast, where she bought an investment property as an impulse buy. She refused to release her diary to the media because she said journalists would go on “fishing expeditions”.

The statement, like a red rag to a bull, prompted Crikey to file a freedom of information request with the Department of Health to Ley’s office — there is no direct way to send FOI requests to ministers — asking for Ley’s diary over the pertinent two months.

But yesterday afternoon, after Malcolm Turnbull announced Greg Hunt would replace Ley as minister for health and sport, the department said it was unlikely the documents still existed:

“It is unlikely that documents such as those to which you have sought access will be in the possession of the new Minister and as such you may wish to consider withdrawing your request.  I can confirm that the Department of Health does not have possession of any of the documents to which you have sought access.  You may wish to consider submitting a new request to an alternate agency.”

The Department of Prime Minister & Cabinet might have a copy of Ley’s diary as part of its investigation, but Turnbull told journalists he had no intention of releasing any findings from the investigation that resulted in Ley resigning from the cabinet.

“The advice that I’ve received from the Secretary of my Department is advice to me and the Governance Committee of Cabinet. The practice has not been to release advice of that kind.”

Latho loves the Libs. Mark Latham stuck the boot into Mike Baird this morning, following the news Baird would step down as NSW Premier. But Latho’s view of Baird does not apply to all Liberals, with the former Labor leader set to appear at a fundraiser for the Roseville branch of the Liberal Party, speaking at a dinner hosted by the Northern Sydney Conservative Forum. As reported in The Australian today, Latham will speak on the topic “The Fight to Save our Civilisation: Why Social Conservatives and Social Democrats have found Common Cause” on February 22. The organisation has previously hosted Jennifer Oriel and Tom Switzer in similar events, and tickets to this one cost $85 a pop. 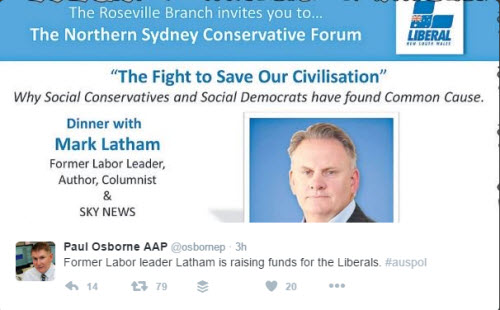 Where’s Tony? A tipster spotted former prime minister Tony Abbott at the Hilton Hotel in Adelaide yesterday, right in time for the Tour Down Under, the cycling event that takes place across South Australia this week. Today he has tweeted he is taking part in the Beat Cancer Tour, which rides the same path as the Santos Tour. Of course, riding hundreds of kilometres doesn’t stop Abbott from paying attention to politics; yesterday the former PM defended his legacy, tweeting “traditional cabinet processes operated at all times between 2013 and 2015” and “A govt without proper process would not have stopped the boats, concluded the big FTAs and made a very strong start to budget repair”.

Culleton gone fishin’. Last week we reported that Rod Culleton’s name still adorned his office in Parliament House, as he was claiming that because he still had his senator’s badge and his office, it meant that he was still a senator, despite being ruled ineligible to do the job because of being bankrupt. Culleton later said he was going on a “self-imposed” absence from the job, after warnings from Senate president Stephen Parry about the penalties for impersonating a public official. His Facebook page now reads “Rod Culleton ‘Senator’ for WA – Gone Fishin'”. Yes, they are his scare quotes around “senator”.

Spectator hearts Julian Assange. January brings many well-loved debates to the Australian media sphere: should we say “Australia Day”? Should we celebrate Australia with images of people in hijabs? Who should be honoured as Australian of the Year? The Australian always runs its own competition — spoiler alert: Gina Rinehart always gets a nomination. Now the Spectator Australia has a contribution to make, suggesting WikiLeaks founder Julian Assange should get the gong. How things change! Former Coalition adviser John Adams writes:

“The award’s criteria are threefold: a contribution to the community locally, nationally or globally, an inspirational role model and demonstrated excellence.

“Assange exceeds across all these categories through liberating the citizens of the world with the truth, demonstrating phenomenal moral and physical courage and creating the world’s leading international publishing house of secrets with a perfect 10-year publishing record of authentic and original source material.

“Of all the named finalists for the 2017 award, their efforts pale into insignificance compared with what Assange has accomplished in 2016.”

Those are “sarcastic” quotes. Although, Culleton being a senator is scary.

You can understand why Turbott cut that (fishing) line.