Crikey Worm: Hunt on for Mediscare, One Nation on its knees

Good morning, early birds. A reshuffle in the ministry, the hottest year on record and bushfires across the country. It's the news you need to know, by Sally Whyte and Max Chalmers.

HUNT ON TO KILL MEDISCARE

Greg Hunt was all smiles yesterday as he toured Frankston hospital after the announcement he would take over the Health portfolio, pledging his commitments to the country’s GPs and Medicare, in a bid to reset the debate over health. One of Hunt’s first conversations in the new job was with Australian Medical Association boss Michael Gannon, who told Fairfax he had been communicating with PM Malcolm Turnbull via WhatsApp in recent weeks. The Australian reports Hunt’s job will be to foil Labor’s “Mediscare” campaign, but MPs are still worried about Turnbull’s lack of strategic direction for 2017. Turnbull also announced Ken Wyatt would become Minister for Ageing, making him Australia’s first indigenous minister.

Well, this is awkward. One Nation Senator Malcolm Roberts claims he and his party’s leader, Pauline Hanson, were invited to the inauguration for US President-elect Donald Trump, but the Department of Foreign Affairs has revealed Roberts pestered the department with “multiple requests”. Hanson tweeted that she had been “gifted” the tickets earlier this week but would be sending Senator Brian Burston in her stead, as she tours Western Australia ahead of the state election later this year. Burston told the ABC yesterday the tickets came from Republican Adam Kinzinger, but the congressman told BuzzFeed he wasn’t endorsing One Nation with the tickets, which had been given to the Australian embassy.

Bushfires have threatened homes in different sections of the country, with NSW’s Rural Fire Service saying one fire in the Hunter Valley could have been deliberately lit. About 650 hectares of land has been burned near the town of Kurri Kurri, and there are reports of property loss in the area. Firefighters are also battling a blaze in the Great Southern region of Western Australia, where the warning has been downgraded to watch and act, even though the fire was considered out of control and unpredictable last night.

Perth: The third one-day international between Australia and Pakistan takes place in the West today, with the cricket series currently tied at one match apiece. 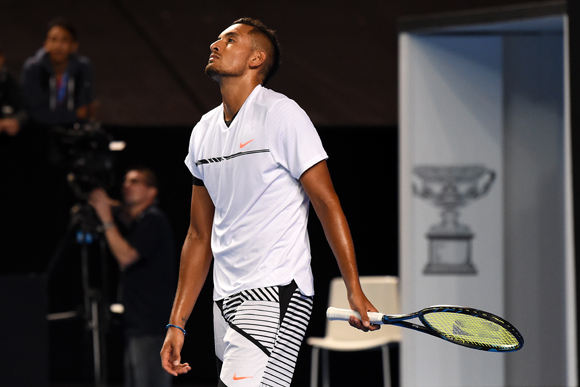 Turnbull’s nothing approach is making his MPs nervous — Sarah Martin (The Australian $): “MPs are hungry to pick a fight with Labor — welfare reform, energy policy and immigration are all areas ripe for a political battle that the Coalition can win — but they need direction from the top and policy differentiation to do so.”

We can celebrate Australia Day, but a handful means us harm — Peter Dutton (The Australian $): “In this present age, is it enough to pass a simple multiple-choice test and basic character, security and other checks after a few years’ residence in order to ­become a citizen? Should we be asking people to demonstrate their commitment to Australian values and our country through a record of work, education for their children, a good level of English language and a ­record of law abidance?”

The blokey culture of finance means we’re missing out on a mountain of ability — Chris Bowen (Guardian Australia): “Australia has never had a female treasurer. Or female secretary to the Treasury. Or a female Reserve Bank governor. Or deputy governor. Or female chair of the ACCC. Or Apra. Or Asic. I think you get the gist.”

Homeless people are mocking Melbourne — Christopher Bantick (Herald Sun $): “I do not see the homeless asking for a job. I see plenty to cardboard signs saying they need a plane fare to get home, or they are hungry, or the self-evident truth that they are homeless. But asking for a job? Nope. Never.”

Last year was the hottest year on record, making it the third consecutive year that a new record was set, according to the National Oceanic and Atmospheric Administration (NOAA). Temperatures are expected to ease off in 2017 when the current El Nino event subsides, but scientists from the NOAA attributed the record-breaking run to global warming. NOAA has been attacked by Congressional Republicans in recent years, and there are fears its data and research could be undermined or destroyed under a Trump administration. — The New York Times

Senegal is on the verge of sending armed forces into neighbouring Gambia, where President Yahya Jammeh is refusing to relinquish power after being defeated in a national election. Jammeh has ruled the country for 22 years and has a reputation for human rights abuses but suffered a surprise defeat at the polls in December. The Senegalese army has issued Jemmeh an ultimatum to resign as tens of thousands of refugees flee and tourists are evacuated from the country. — Reuters

Chelsea Manning, the whistleblower and former Army intelligence analyst who gave classified US secrets to WikiLeaks, will be freed in May, after President Barack Obama commuted what was to be a 35-year sentence. The outgoing Commander-in-Chief also pardoned a former general who lied to the FBI about leaking classified information, and commuted the sentence of Puerto Rican nationalist Lopez Rivera. — New York Times

The UBI Bait and Switch: Finland’s UBI experiment serves as a cautionary tale for basic income proponents on the Left (Jacobin): “It is technically possible to create a broad-based UBI that increases worker bargaining power and leisure while decreasing inequality and poverty, especially in a wealthy country like the United States. But it is just as possible to redirect the energy behind a liberatory UBI into implementing a conservative one — forcing unemployed workers into bad jobs while undermining organized labor, earnings equality, and the welfare state.”

Who are you calling a hipster? (Overland): “Real resistance to gentrification would entail the deeply unsexy work of fighting against development applications, fighting for improved social services for the marginalised, seeking better protections for renters and improved working conditions for the precariously and casually employed, amongst other things – and an acknowledgement that ‘hipsters’ are often as much the victims of gentrification as they are its agents.”