Her Twitter profile reads "Campaigner for the innocence of children". So there you go.

The Australian Christian Lobby’s Wendy Francis would do well to look up the definition of the Streisand Effect, after a series of tweets yesterday reminded us all of the existence of Volleys tennis shoes (the company dropped the Dunlop bit, apparently). Francis is the Queensland state director of the Australian Christian Lobby. Her Twitter profile reads “Campaigner for the innocence of children”, and the new battle in that campaign is Volleys’ “grassroots” advertising campaign on the brand’s website, which has been around since August last year.

Francis tweeted: “Parents be aware Dunlop Volley still sell sandshoes for school kids, but their website has R rated images as they’re now ‘all about rooting’.” 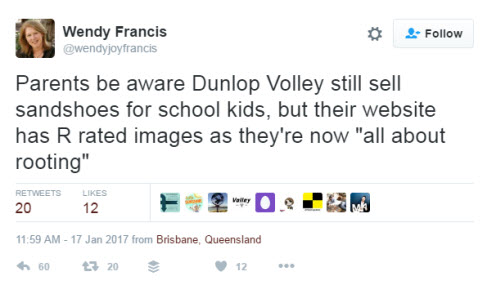 The images Francis objects to, which are on the Volleys website, include this one, with some non R-rated bums: 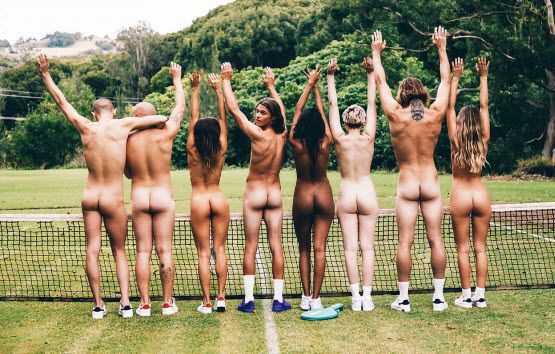 And this one, which includes two men embracing: 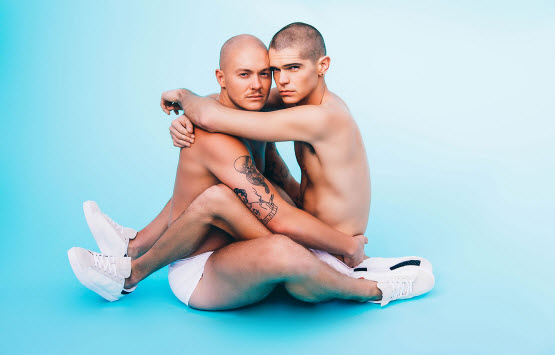 The Volleys campaign isn’t new, and is part of a partnership with Ansell condoms. The website reads:

“Our campaign is all about the celebration of sexual expression whilst remembering to stay safe.
For this reason we’ve joined arms with Ansell condoms in support of safe sex, as whilst we’re all about rooting, we believe in ‘safety first’.

“So stay safe this summer and root for us, root for change, root for VOLLEY.”

Considering the low profile of the images until now, the brand is probably grateful for Francis’ outrage — a spokesperson tells us website traffic is up 275% today after the tweet.

As an atheist I usually find little to agree on with the Australian Christian Lobby. And as a bushwalker I have used volley shoes for 50 years and thought them ideal. Recently however I have had to recognise that despite the good-looking bottoms, maybe the ACL is right… the souls of volleys are dirty.
Its not so much roots as dirt and humus jammed into the zigzag tread which is almost impossible to clean. The significance of that smuttiness has been recognised in recent years with the spread of fungal plant diseases such as Phytophthora ( see https://www.environment.gov.au/system/files/resources/24666949-8c17-44bd-87f1-62aa61f9437e/files/p-root-rot.pdf) and Myrtle Rust (http://www.dpi.nsw.gov.au/content/biosecurity/plant/myrtle-rust)
Sadly I have had to retire my latest, incompletely worn-out pair of volleys in favour of walking shoes with a more open tread.

Gosh – I wonder how she’s going to react when she finds out they’ve been putting Ansell condoms in the boxes with the sandshoes? Because clearly, if they have pictures of gay men on their website AND they sell sandshoes to the kiddies, then they just have to be some of those nasty peddlephile types, eh? And they’re clearly trying to turn all our kids gay!

Some advertising executives would like to hire Wendy Francis to help their campaigns.

The deal is this. A company produces a provocative campaign. But if the campaign is floundering and doesn’t get any hits, they then hire Wendy Francis to announce that Christians are offended, which results in 3x the web traffic and a huge boost in sales.