Daily Tele versus non-existent greenies. The Daily Telegraph‘s front page today rails against “mindless” “dumb” “stupid Greenies” endangering the safety of the community by vandalising shark nets, despite the government report the story is based on making no mention of anyone being arrested for damaging the nets or their motivations being known. The report reads:

“With NSW in the grip of a shark epidemic — including 22 grisly attacks since 2015 — stupid Greenies have vandalised a series of shark nets at Queenscliff, Bondi, Dee Why, Manly, Curl Curl and other popular Sydney beaches.” 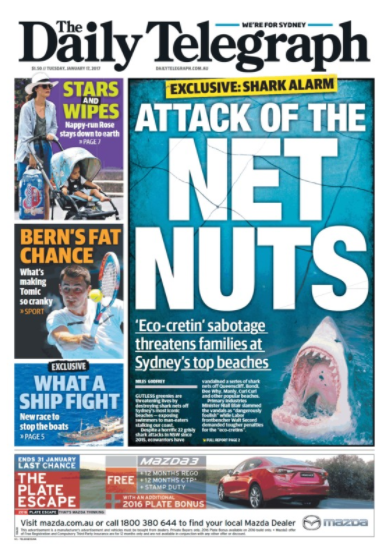 The story, by Miles Godfrey, is based on the Shark Meshing (Bather Protection) Program 2015-16 Annual Performance Report and is described as an exclusive, despite The Sydney Morning Herald publishing a story based on the same report. Shark nets have been undeniably controversial, and yes the NSW Greens do oppose their use, but perhaps name-calling isn’t necessary in reporting on vandalism of the nets. If Godfrey and the Tele need an example of how to more soberly report on shark net vandalism, they could just look at Godfrey’s remarkably similar front-page story from 2015 based on a previous version of the annual report. According to Godfrey in September 2015:

“Eco-warriors have vandalised NSW shark nets at least 14 times in the past five years, leaving beaches temporarily unprotected from man-eaters in spring and summer — and in some cases allowing damaged nets to drift kilometres through the ocean.”

Today’s story ran under the headline “Attack of the Net Nuts”, while the previous one was “Great White Dopes”. No use of the term “stupid Greenies” in that story, but it did include this quote from a Department of Industries spokesman, admitting “Proof of malicious damage is difficult, unless observed”.

Don’t let the truth get in the way of a good story.

Greens’ star recruit. Speaking of the Greens, the Australian national conference of the Young Greens is set to take place in Canberra at the end of the month with a high-profile international guest. Former US presidential candidate Jill Stein will speak at the conference via Skype at the end of the month, after running against Donald Trump and Hillary Clinton last year. Stein has previously cast doubt on the safety of vaccines and exposure to wi-fi. The theme of the conference is “break the two-party system”, but considering Stein received around 1% of the popular vote in November, she may not be the best person to take advice from.

Channel Nine shake-up. Eyebrows were raised this morning at the news two female non-executive directors of Nine Entertainment were stepping down from the board.

Elizabeth Gaines and Holly Kramer are leaving — Gaines had been earlier named to the plum job as the chief financial officer of the iron ore exporter Fortescue Metals Group, while Kramer said she was quitting as part of changes to her board portfolio. Her other directorships include Woolworths and Australia Post.

“Holly and Elizabeth have both been valued members of the board of Nine Entertainment during their time as directors,” Costello said in a statement to the ASX. “They have also made significant contributions as the Chair of the People & Remuneration Committee and Audit & Risk Committee respectively. I thank each of them for their excellent contribution as directors and wish them both much success in their future endeavours.”

It is rare to see two directors leaving a company board at once, let alone two high-profile female non-executive directors. Before the announcement, Nine’s board had equal numbers of women and men. Kramer especially would be in high demand for other senior board roles, such is her reputation. Gaines’ decision is easy to understand given the pressures as CFO of Fortescue and her need to devote all her time to her new role, but both leave Nine searching for new board members, with a plan to announce the replacements before Gaines and Kramer leave on February 3.

Ah, the Tele, Australia’s very own peddler of copious amounts of fake news. And even then have trouble selling their product, its a good NewsCrap product.

… fortunately, I do NOT! Dog be Praised.

This is not journalism, it’s typing. How long before this sort of verbiage-as-filler between ads comes from an algorithm?
Or is it too late, are They out there already?
I heard some mention recently about a new innovation, fake news. Is this it? Doesn’t seem new, even for an innovation.